Musical beginnings. This publisher was born 1962 in Northern Germany with six planets and not moons in Aquarius. Formative years went to studying classical clarinet first in a marching band, later with private lessons in Hamburg, eventually at the conservatories of Hannover and Stuttgart. After 1974 he participated in work shops which assembled symphony orchestras from amateur musicians to rehearse for 7-10 days, then conclude with a few public performances. Later he was a member of Germany's Federal Youth Orchestra under its founder Volker von Wangenheim. This was comprised of prize winners from Germany's annual Jugend Musiziert competitions. It attracted guest conductors like Claudio Abbado and soloists like Alexis Weissenberg. This temporary symphony toured Europe and music festivals like Montreux and Edinburgh.

Philosophical beginnings. At eighteen and much to the chagrin of friends and relatives, this future scribe traveled to India to spend time in the ashram of the controversial mystic Bhagwan Shree Rajneesh who later became known simply as Osho. Osho gave him the name Dhyan Srajan which translates as 'creativity from meditation'. Srajan eventually abandoned his classical music studies to concentrate on these new pursuits. He emigrated to the US to become part of the Rajneeshpuram community in the high desert of Oregon. When that large-scale experiment ended and much of the community regrouped in the former Indian headquarters of Poona, he decided to stay in the US.

Writerly beginnings. The authoring bug bit in the summer of 1999 when Srajan submitted his first unsolicited equipment review to SoundStage!. He was soon offered a regular column christened The Y-Files in a humorous bow to the X-Files—laden with intrigue and conspiracy theories—and the perennial 'why' which plagues most mortals, audiophiles included. The Y-Files became an outlet for hands-on involvement with audio dealers and manufacturers across the country. By April 2001 he pursued writing full-time and was involved with the relaunch of GoodSound!, a SoundStage! affiliate dedicated to affordable gear. He also launched a second column called Earmarked!. In November 2001 Srajan moved back to Soliloquy as contract website manager and in-house technical and creative writer. He now joined EnjoyTheMusic.com with two new columns, Earwax—a continuation of the Y-Files format—and Global Caravan, a music column dedicated to WorldBeat and Ethnic Fusion. Armed with the ongoing experience of managing Soliloquy's website and working on a few others, the urge to go solo arose. He launched 6moons in June 2002 out of the mountain hamlet of Taos in the high desert of New Mexico. 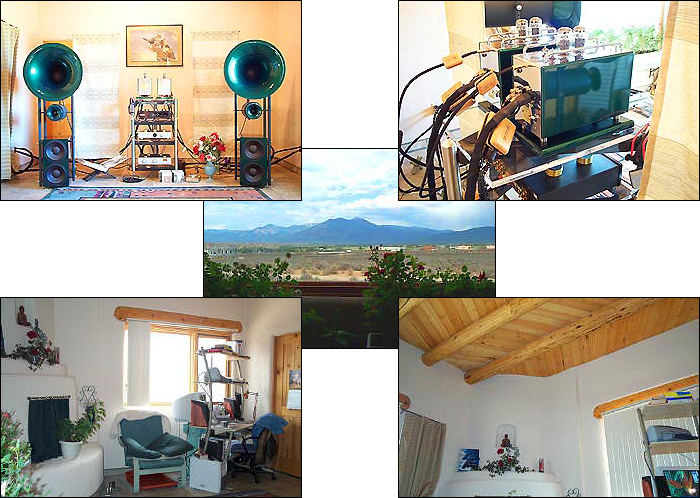 Srajan and his wife Ivette subsequently moved to Coral Bay, a beach community on the Western shore of Cyprus in the Mediterranean. A few years later they relocated to Switzerland's canton of Vaud. Listening to music is considered as vital as food and sometimes more so. Primary listening fare is WorldMusic and Ethnic Fusion, with a particular appreciation for Flamenco, Middle-Eastern, Gipsy and Indian styles. Less habitual material includes classical symphonic and chamber music, selected Trance, Techno and New Age and certain Jazz performers like Andy Narell, Eddie Daniels and Pat Metheny. After living in Chardonne, Villeneuve and Le Mont Pèlerin in Switzerland, Srajan & Ivette moved to the Irish west coast around Westport, Co Mayo. Their first house was in Lecanvey facing Claire Island, the second one was in Liscarney behind Croagh Patrick.

Credits. For world view and spiritual perspective, grateful acknowledgements go to his root teacher Osho as well as the American-born Avatar Adi Da Samraj, British-born Maitreya Ishwara and modern-day teacher Nirmala. A Namaste also to Vasant Swaha, a fellow traveler who became a gardener of souls; and Hana B. Mata for useful lessons.

Âcknowledgements. For encouragement, a salute to Chip Stern formerly of Stereophile. For initial risk taking of giving an unknown writer a start, a tip of the hat to SoundStage! whose management was instrumental in launching the original Y-Files. For advice, original graphics and design concept, thanks to Nobuko Nagaoka of KumaDesign. For supporting 6moons with independent content, kudos to our cadre of writers. For supporting our fiscal viability, gratitude to all manufacturers in our showcase and audio reviews ads.

Sound rooms and review systems. Since its launch, 6moons reviews penned by Srajan have taken place in the various environs shown. The following hardware profile tells you about his ownership familiarity or lack thereof when it comes to specific component types and price ranges. 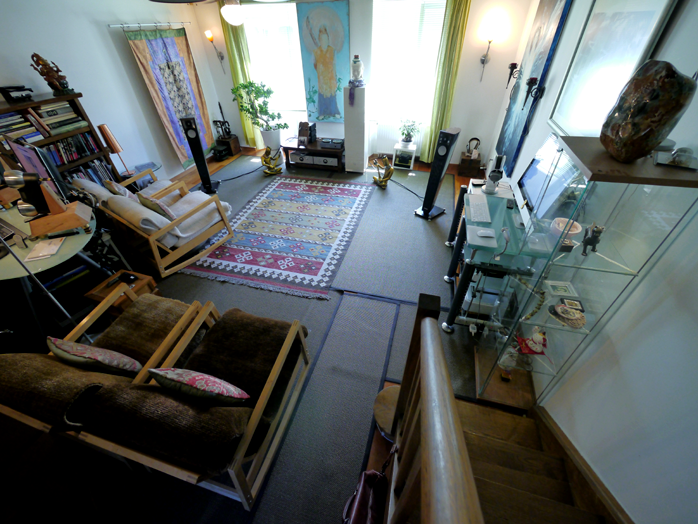 This list includes a reasonable mix of transistors and tubes, low and higher power amps, class A, A/B and D, triodes and pentodes, single-ended and push/pull, chip-based and discrete, feedback and zero NFB, 2-ways and 3-ways, widebanders and subs, omnis and horns. You won't see planarmagnetics or electrostats, just one 4-way, few metal driver speakers, few ported main speakers and absolutely nothing on vinyl. That tells you a bit about Srajan's interests, preferences and the financial range he plays at.