Here digital i/o cables were 110Ω AES/EBU. The analog lead between DAC and amp was XLR. The X7-DDC ran off the Clean Power. I was surprised but in hindsight shouldn't have been that the same differences applied but now were clearly magnified. DAC direct, the plucked lap harp was distinctly glassier. The entire presentation was more forward, ambient space was far less resolved and the vocals were grittier, sharper and drier. And there was a third offset which hadn't factored in the speaker system: focus. Without the DDC in the loop and despite Auralic's clock being set to 'exact', the Vega's image focus was more vague and ambiguous. That this could coexist with glassier sharpness was surprising but obvious. The best word for this blurrier vagueness perhaps is phasey. It behaved like some phase errors. Haziness covers it as well. 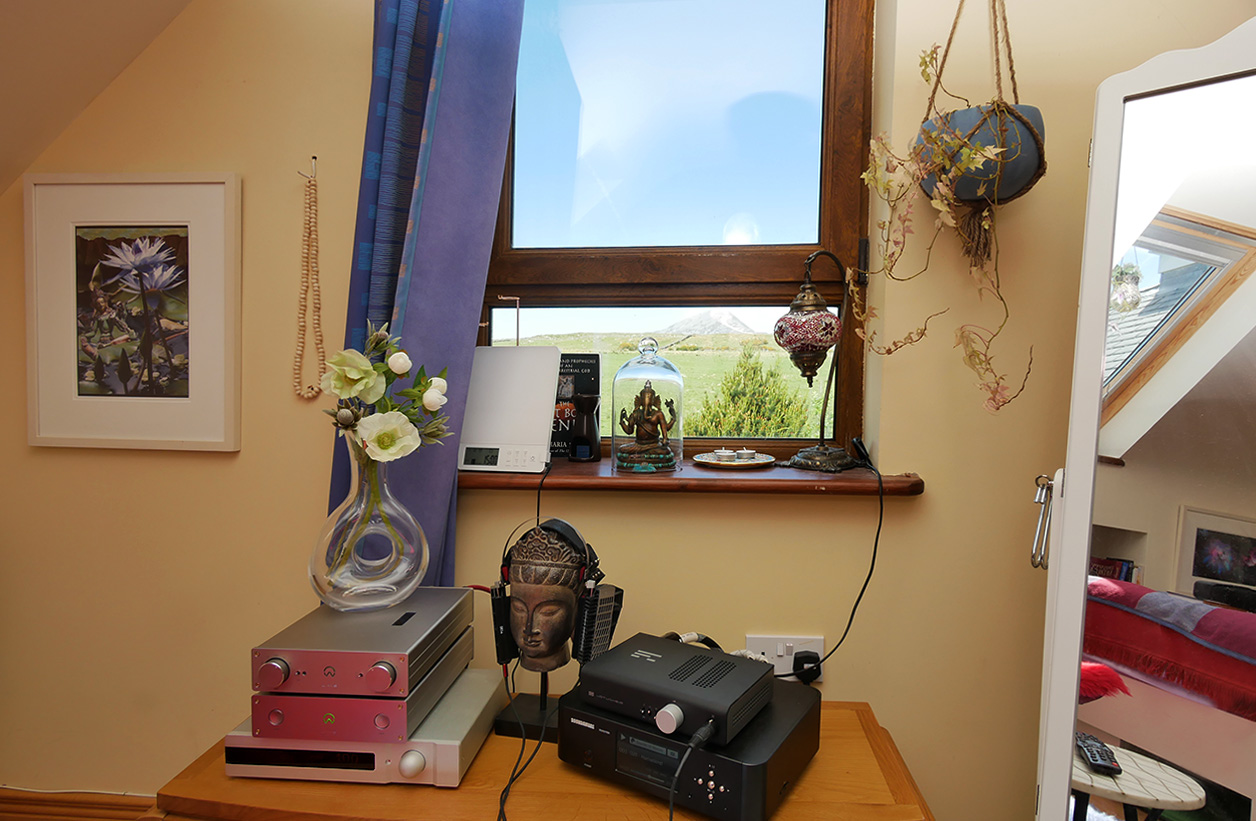 Whilst some credit for widening the delta went to the Serbian ribbon earspeakers, the Vega's seven years must have factored as much. Clearly digital had progressed sufficiently to make this D/D converter a very effective bolt-on mod. I'd not expected how obvious it would be. Switching clock generator settings, the Vega's display promptly confirmed them up to its limit of 192kHz but they were too subtle to be meaningful. In this setup, I'd want the X7-DDC even if it had no sample-rate conversion. It gave the Auralic both higher resolution and more refinement from a clear rejuvenation treatment. 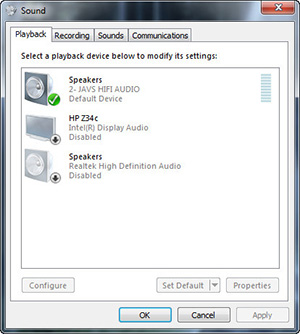 The next stop was my desktop. I'd already installed the JAVS driver for the X7-DAC MQA review. Now Windows recognized the X7-DDC right off.

I ran anything from compressed subscription Spotify to full-resolution local files at Redbook or higher. Judges were HifiMan's HE-1000 planars and Fram Audio's Midi 150 active speakers. The headphones plugged fully balanced into a COS H1 DAC/amp. The active monitors on tripod stands off the desk got the same coaxial signal.

No matter, the Soundcat left clearer and deeper footprints than our Audiobyte Hydra X+. As with that, headfi with the added JAVS eclipsed a direct-to-DAC feed via short Curious USB cable. This already factored on 320kbps SpottyFi but naturally far more on 1'411kbps Redbook. Similar to the earlier trials, I couldn't latch onto different clock generator settings except for the jump from x 2 to x 4. That one did telegraph as being a tad more wet or fruity.

But never mind splitting hairs. The real action was a simple matter of with/without.

With the DDC—let's call it the digital detour case—contrast ratio increased again. My favorite kitchen example for that is a first-rate Tom Yum soup. Built on chicken stock, it combines lemongrass, garlic, galangal, coconut milk and chili, then floats shrimp, mushroom and tomato. Served fresh by a good chef, the sour, sweet and hot notes will all coexist without diffusion. The flotsam veg and shrimp/prawn aren't overcooked but still crunchy to retain their own unique flavor. It's a rich profusion of high contrasts. The opposite is a soup blitzed in a blender. All ingredients fracture into one compound taste. It's homogenized.

In hifi terms, that's lower resolution and separation. It's less distinctiveness of simultaneous timbres. It's lower contrast ratio. Critically, JAVS didn't fake up their higher contrast with glassier wirier transients or sharper treble. One might just call it higher natural resolution without the sharpness, bite or extra chili of pixilation. 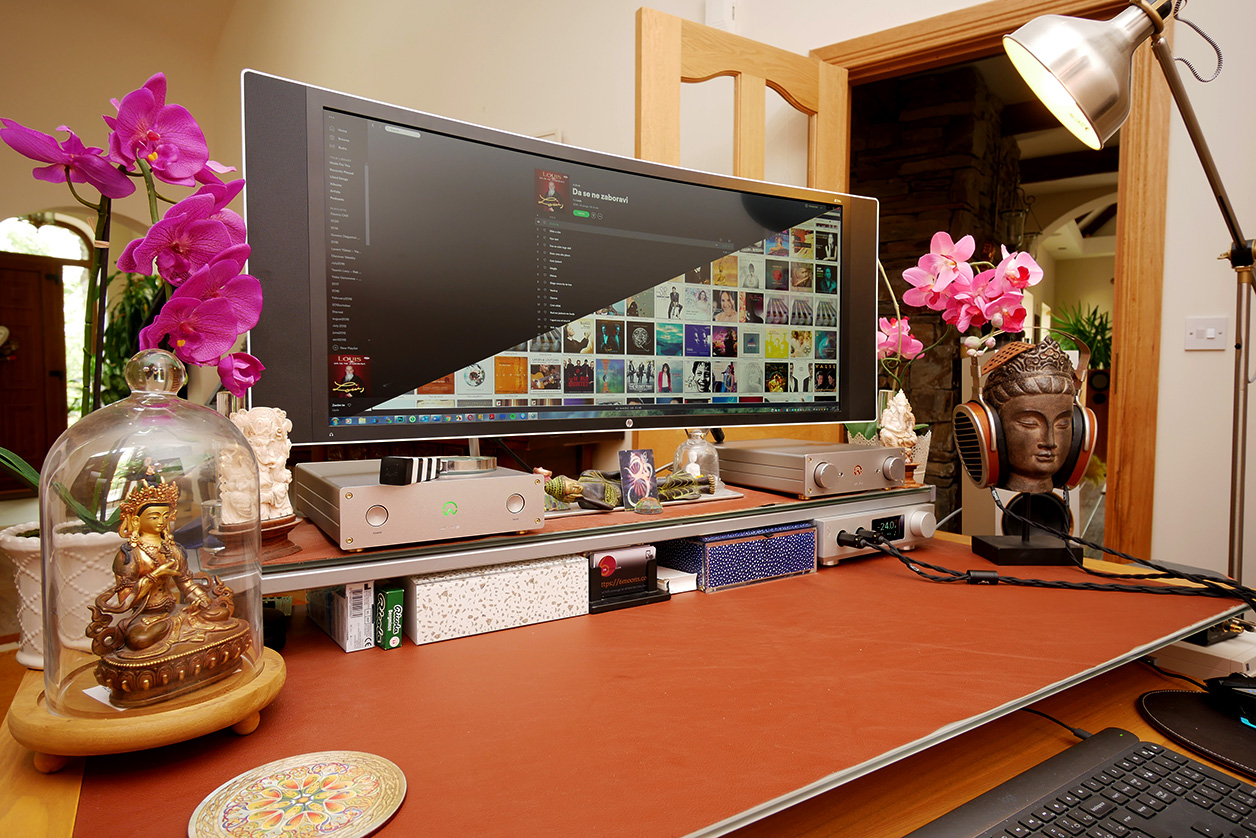 Split screen shows Spotify on top, JRMC on the bottom

A related benefit was keener excavation of recorded space. That's defined by faint halos, reverb trails and reflections which map images inside a three-dimensional space other than ours. That aspect is particularly welcome in headfi where transducer width limits to the ~21.5cm between our ears plus a few centimeters of ear pads. Here sense of distance is confined to our skull and some cranium wrap. Anything that adds spaciousness, depth perspective and image separation is welcome. That's equally true for computer speakers where a screen creates a visual and acoustic barrier between them. Where there should be musicians, there's text and unrelated pictures unless we watch full-screen video. Here too the X7-DDC enhanced depth and more specific imaging in higher contrast.