That level of transparency was a reviewer's dream. I never heard nuances between cables, DACs, streamers and amplifiers so vividly as I have with Taksim, even more so than with my Ocellia which cost four times as much. Taksim didn't seem to have issues with higher-powered solid-state amplifier which make the Ocellia sound dreadful. When the upstream components changed, the sound of the system changed accordingly with no obvious gross incompatibilities on any amplifier type. Now I just had to experiment with six different amplifiers where I never had prior opportunity to so keenly observe and understand their sonic differences. The source was my Aurender A10 a streamer, file player and DAC throughout and cabling was a full Zu loom of Varial interconnects, Mother cords and Event 2 speaker cables which provided a fuller sound than my typical mix of Genesis and Ocellia cables. 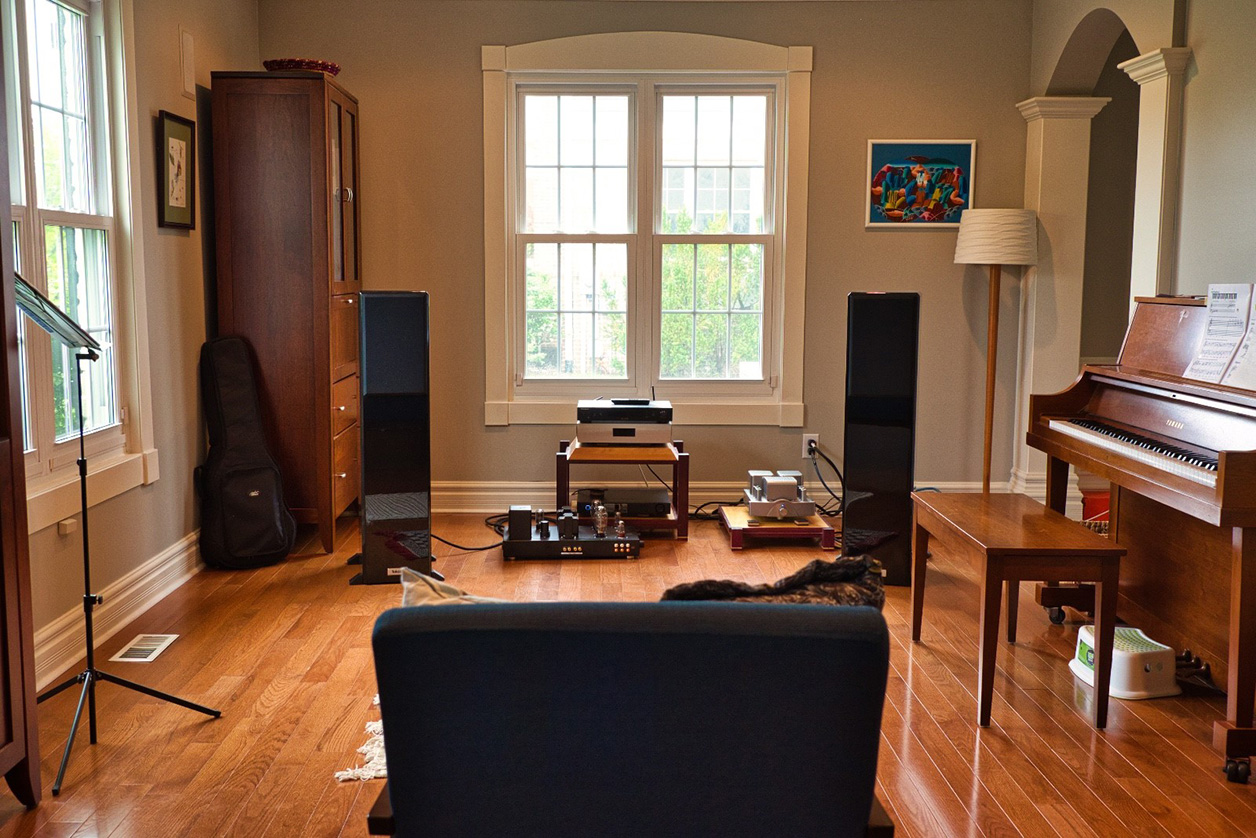 I started with my usual Triode Labs 2A3 single-ended integrated whose mighty 2.5 watts had no issues with the Taksim from its 8Ω outputs. By 11:00 on the dial, the sound pressure was as much as I can stand and the music filled the room. As expected, this combination had by far the widest soundstage and most holographic 3D presentation of any I tried and midrange tonality was breathtaking, shockingly on par with the Ocellia, a bit more raw, less sweet and free but excitingly intense. Of all the amplifiers though, the 2A3 integrated also exhibited the least amount of bass output and upper bass slam, not that any of the amps were able to coerce the Taksim significantly in that range. Still, the 2A3 was weakest, not surprising as it's not this design's forté. I'd expect a proper 211, 845 or even parallel 300B to do quite a bit better. What this experience confirmed though is that these speakers do live up to their claim of being viable with low to mid-power SET without any of the frequent midrange and treble idiosyncrasies which most widebanders exhibit. They actually not only avoid the major flaws, they operate on the same level of excellence as the famed PHY driver of the Ocellia, albeit with far superior treble.

At the other end of the spectrum I went with my solid-state premium integrated, the Playback Design with its internal DAC to see how the speakers would respond with a much faster, leaner and exacting amplifier. Surprisingly this came off much better than expected and although at times I could sense the usual lack of flowing ease I usually hear when coupling widebanders to amps with high damping factor, this was nowhere near as noticeable or offensive as with the Ocellia. What I heard was the most pristine treble presentation of any I tested, revealing just how linear and undistorted the Playback Design is in that range and how much information gets revealed when one pairs such circuit purity with a tweeter of the caliber of the Taksim's. What it also showed is that Playback Design's internal DAC completely eclipsed the Aurender A10 in terms of treble resolution. When I compare the two on my Rogers LS 3/5a, I typically don't hear a difference but those speakers aren't really known for being treble champions. With Taksim things changed completely and although the A10 delivered very good treble, the field-programmable gate array in the Playback Design played in another league altogether. You could hear it in the subtle fluttering of a piccolo, in the complex overtones of a mandolin or on the initial bite of a baroque violin. As Srajan often says, it's impossible to 'unhear' a system that operates in a different league from your usual reference. That's how I felt about the combination of Taksim with Playback Design for treble accuracy. Compared to the Triode Lab amplifier, soundstaging was not as wide but a bit deeper, the midrange didn't flow quite as freely and tonal colors were a bit lighter without being bleached but I certainly would avoid any amplifier on the colder leaner end of the spectrum.