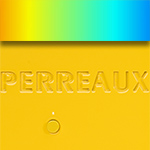 Oh. You could spell it eau. Voilà, water in French. You could spell it aux. It's still French but 'to'. So in Pidgin French, aux eau means going to the beach. O². Oh là là. Still in a Gallic mood, père is clearly dad. Does that make Perreaux the father of the beach: the Gran Kahuna, vanquisher of gnarly swells, hero of the longboard, bronzed babe magnet? Check out that lemon-yellow 300iX with turquoise Oled display. The only thing missing with that tan is a pair of heavily reflective Oakley or Maui Jim shades in iridescent insect-from-outer-space coating. At 350wpc—600 into 4Ω, first 10 watts in class A—it's one muscular 21.5kg dude with bipolar class A inputs and Mosfet class AB outputs. With onboard ESS 9038 Pro DAC and MM/MC phono, he masters all disasters. Bluetooth equals modernity. iOS/Android app seals that deal. An IR wand caters to old-timers. There's even 1W/30Ω headfi in class A to surf the inner waves. Baywatch,

eat your heart out. Brought to you from Kiwiland since 1974. Actually, all Peter Perreaux had at the time was a 22wpc class A amplifier. With just two years shy of half a century today, many waves have come and gone. On their website's 'gallery' page, we see that time line compressed into a range of successively very different-looking kit.

That includes 1995's Dog-Bone components as a pre-echo of KEF's 2007 Muon speaker; and an ad of a big truck, front wheel parked rakishly atop a Perreaux amp. Do this at home, kids. One imagines at least one change in ownership since. I've simply not followed Perreaux close enough to have details¹. We'll unceremoniously skip ahead of the queue, to mid-September 2022 and their biggest burliest integrated yet. To be had in any rad tint you crave. Truly. Name it. Gloss or matte. Order it. They'll paint it. Off it goes along the rainbow to your doorstep. I haven't the faintest what hue my Scottish sample will arrive in. Moss green? Tartan terra? Imperial blue, red and white? It all depends on how adventurous or tipsy Elite Audio UK's owner Mark Cargill was when he ordered his floor demo. Based on how conservative us neighboring Irish are, I'm not expecting potent purple or pearlescent pink. Just don't make it bitter black; please!

¹ According to NZ's witchdoctor site, Martin van Rooyen and his wife Vicky acquired Perreaux in 1995 and moved operations to the Southern island's Mosgiel. By 1998 current owner Edwin Nieman took over who is based out of Dunedin just 15km from Mosgiel and also operates Kamahi. 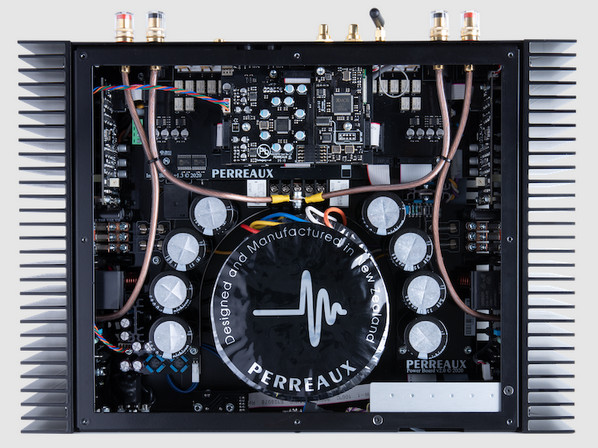 With great power comes great punch. Great poise, purity and related purple prose? Perhaps not equally. That can be a basic mindset on mega amps where well-informed playback SPL are known to rarely eclipse ten watts. In the handbook of muscle amps, 'authoritative' is an oft-appended virtue. So is 'incredible bass'. Ditto 'relentless control' vis-à-vis reactive speakers and burly woofers. And that 'big amps make small speakers stand tall'. Those really are two of the most obvious battle grounds: inefficient small boxes needing all possible help to sound properly hung; and low-Ω challengers with gnarly phase angles which otherwise won't come to life. On happy-go-lucky speakers meanwhile, a routine observation can be more beefcake grunt than a ballet dancer's or fencer's grace and speed. Lumberjack not limber Jill. So inspecting such preconceptions is on the menu. [200wpc 200iX at right.]

One reason for the belief that big power corrupts is what its creation often entails: more cascaded gain stages with more nested and/or global negative feedback. Each additional stage adds complexity to remaining THD. Mass paralleling power transistors undermines precision because their matching will never be perfect. Bigger transformer/s are potentially noisier. Big filter caps recharge slower. More of everything undermines circuit simplicity. Purists see this as counter-productive. Must it be true though? If not, are there advantages to higher current and headroom that can't be gotten any other way? I'd be unable to say without altering specific parameters on the Perreaux itself. All I'd have are listening impressions on the totality of the many design decisions which the 300iX locks in.

Only Edwin and his team of 20 engineers know how its feedback, gain stages and parts contribute to the final result we hear. It's where my tech talk must end. As homo digitalis, I'll also skip phono but not headfi, XLR or digital. My lifeguard on this beach is Gold Note's IS-1000 Deluxe, a similar-featured €5K integrated if only 1/3rd the power. We roll with what we have. In our neck of the woods—Shannon river estuary not Ho'okipa beach or Pe'ahi aka Jaws—monster breakers not in class D are few. The 300iX would be a rare chance to strap it on. Typhon season?

That was an intro to the brand and smaller 200iX integrated from former contributor Edgar Kramer.