In a mid-70's Chicago club called Wise Fools Pub, I had the great luck and pleasure to hear for three nights in a row a group called Osibisa. In hindsight this international ensemble was one of the first to focus on what we now call world music. On their album Woyaya, the Model 100 demonstrated one of its special qualities by how it could replicate the original time/space with wrap-around holographic immersion for a you-are-there sense that was greater than I ever experienced from a box speaker. The only times previous I heard this was from a pair of omnidirectional MBL Radialstrahler E101 MkII so yes, I'm talking soundstaging. Here my normal vocabulary falls short to describe how the Model 100 creates that spatial illusion. All the key qualities of superior soundstaging were present. The speakers disappeared in the space they created with high palpability, accurate layering, air and space around individual players, tremendous scale and detail resolution into the farthest recesses of the recorded venue. The Model 100 presented a sonic hologram that transported me back into the time/space of the original performance. This did not feel artificial since on recordings with less acutely captured space, it wasn't as strong.

In my collection of Jazz albums, one that stands out for its stellar rendition of the transient speed of an ensemble at full blast is tenor saxophonist James Carter's Carterian Fashion. Mr. Carter is a force of nature throughout. The sound quality of this disk truly tests any speaker's ability to realistically track the dynamics and speed of his instrument from bursts of notes to lengthy phrases due to his endless circular breathing. The Model 100 effortlessly portrayed these musical moments with total accuracy without ever hardening in tonality or distorting the leading edge of the notes.

My favorite trumpet player of all times is Lee Morgan. I sadly only heard him live twice before his untimely death at a very early age. One of his classic Blue Note albums is The Sixth Sense which he recorded after his comeback from drug addiction. When I cued this up in my Jay's Audio MkII transport to see what the Model 100 would do for presenting Lee Morgan's warm and beautiful timbres and the minute details of his unique phrasing, I planned to just hear the first cut.

About an hour later when the CD was over, I had lost total track of time. This might convey how engaging the NSMT speakers were at drawing me into the music on an emotional level.

As I stated at the beginning, the NSMT Model 100 was one of the most exquisitely pleasurable engaging auditions I've had in my reviewing career. Based on prior experiences with Erol Ricketts speakers, I had no doubt that the Model 100 would be a fine speaker going in. However, these greatly exceeded all my expectations. The Model 100 offers the beautiful timbres, tonality, colors and pristine clarity of widebanders, the holographic staging I have heard only with the most expensive omnis, a silky smooth delicate treble and taut tonally correct bass down to 20Hz with the ability to pressurize any room all rendered in a seamless progression. This speaker is housed in a beautiful natural birch ply cabinet with a small footprint and the ability to fine tune its performance. The highest compliment a reviewer can give a piece of equipment is to buy it for their system. I will be purchasing this review pair to add to my speaker stable for the large downstairs system. 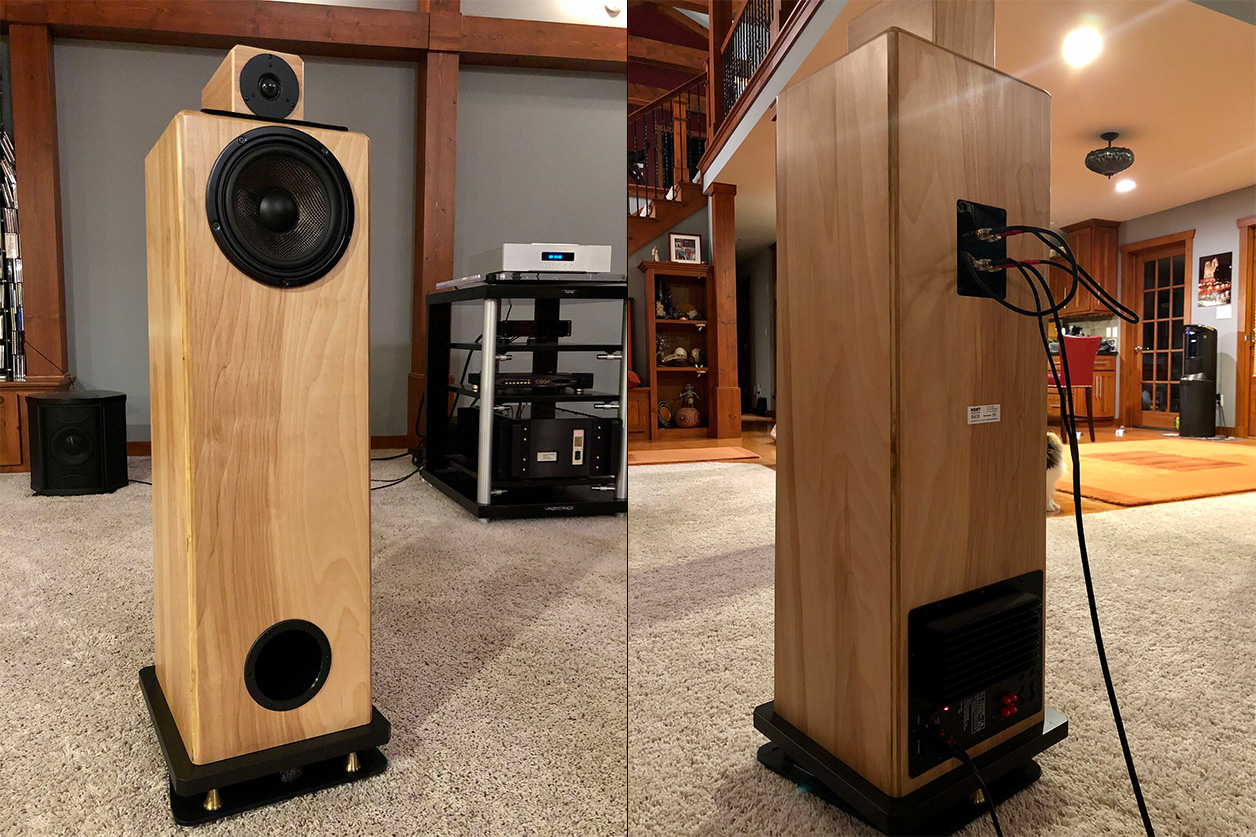 Quality of packing: Excellent with double shipping cartons and inserts to protect the finish.
Reusability of packing: Good, I recommend you take pictures to insure that you pack them up with the inserts in the correct locations.
Condition of components received: Pristine.
Delivery: UPS
Website comments: Well written and informative.
Human interactions: friendly and supportive.