Professional DNA. Before we kick this door in, let's acknowledge that like Daniel Weiss or Ed Meitner, Michal Jurewicz came to consumer hifi from the recording side, specifically Manhattan's Hit Factory then Skyline Studio. He launched Mytek in 1992 so celebrates his 30th business anniversary. Our season-to-taste mentality in the home embraces happy hedonism. We listen for personal pleasure, not to critique and dissect a mix down to its skeleton like a forensic pathologist might. Meanwhile recording professionals need the naked truth to make the very many adjustments which are the bread and butter of mixing & mastering. It's profession versus hobby, maximally sharp tool versus entertainment device. The latter could follow fuzzier logic. That the two needn't be at odds is obvious from the number of brands which have crossed over in either direction. Think Adam, Amphion, Antelope, Benchmark, Bryston, Dynaudio, Genelec, Manley, Mutec and so many more. Unless a firm deliberately adopts different approaches for each market, arriving from pro should predict close adherence to "hear the signal as is without any adornments". Entering today's gig could predict a heavy dose of scopolamine not psilocybin so truth serum not magic mushroom. True or false, preconceptions do exist. They deserve mention even if they're later refuted. That covered certain small print. It also explained DSD and full MQA support. Michal was part of the DSD Super Audio CD Project and now helps develop MQA mastering/playback. He's extra fluent in these formats and codecs.

To fully appreciate what 'II' signifies in today's model name, here's a look at the original Liberty DAC from our May 2018 review. Michal then still used a switch-mode power supply with external 12VDC power adapter. Managing to advance to a built-in linear variant shows elite packaging skills. One imagines HP waving a magic wand and commanding "get ye stuffed, mini". Gone too are the front's visible hex bolts whilst the new button/LED array is more informative. Homies applaud full-size XLR outputs in lieu of the older ¼" pro jacks. Despite its undeniable studio heritage, Liberty DAC II really caters to our sort including remote and see-in-the-dark volume position. Let's not overlook the subtly engraved and hole-punched decorations to spruce up basic black-box dress code. (Why we say spruce not oak or maple up I've never understood. But then I couldn't design a DAC either. So there.)

For a further glance at Mytek v2.0 revisions, just like Aavik their existing Brooklyn amp is based on an OEM module from Denmark's Pascal since it had to package into a small chassis and sell for a price which would never recoup in-house R&D on a proprietary solution. For Mytek's new €20K/pr flagship Empire monos and €7K Manhattan stereo amp, shackles on spendable shekels shattered. Michal now has his own GaNFet power circuit to directly challenge Merrill Wettasinghe's Element amps or Alberto Guerra's Vivace/Audion/Tempo for best-of-class D status. Reboot for the big foot? "We will be at the Munich 2022 show. The biggest thing we'll show is the Empire streamer and Empire monos powering Wilson Audio Sasha DAW speakers." Big foot indeed. 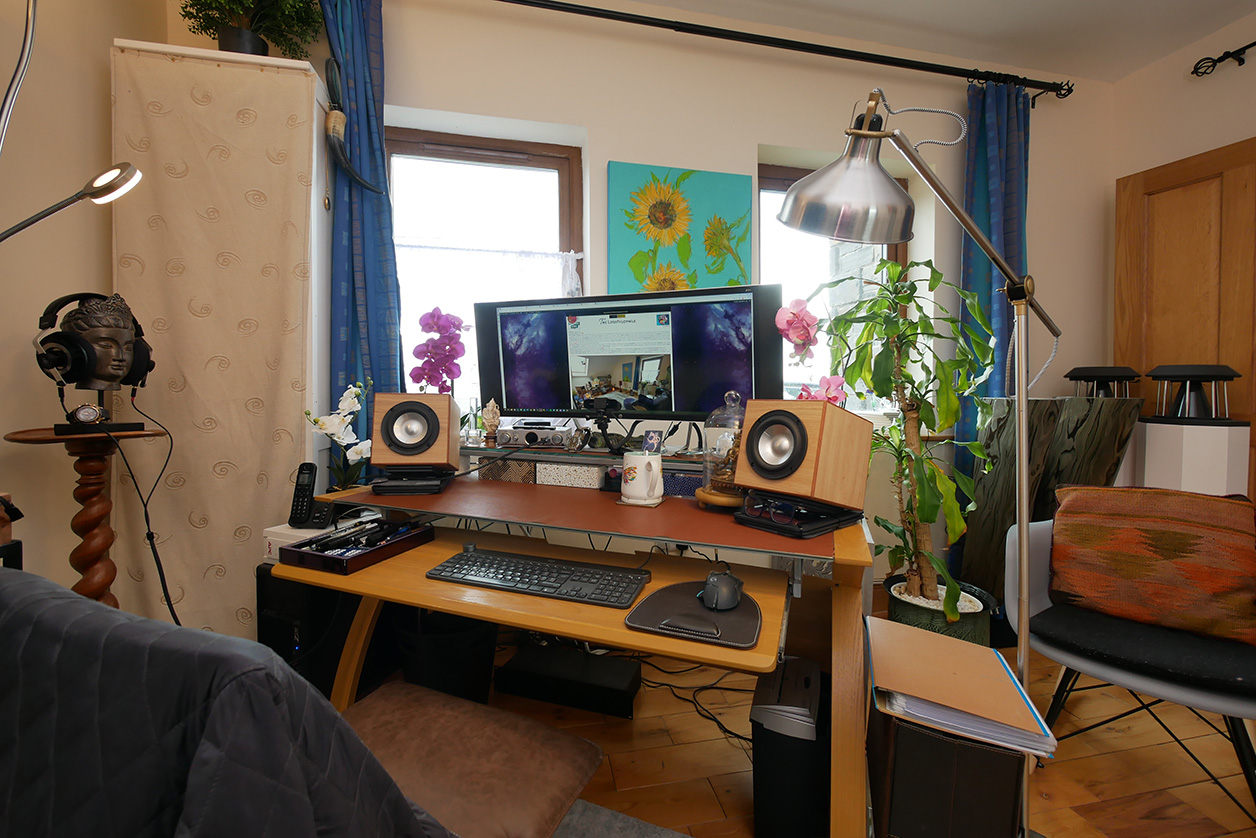 When my parcel's UPS tracker emailed in, Gdynia of Poland showed as township of origin. That's on the Baltic coast just north of Gdansk. With it there was no add-on VAT for my delivery within the EU. With Brexit, it's our UK neighbors who added the self-inflicted pain of now paying value-added tax upon receipt. Liberty DAC 2's first pit stop in HQ 6M would be fronting these Slovakian active cubes on my desktop. Puny form factor and USB make our Mytek ideal for such space-challenged applications. My roughly twice-priced resident filling this workspace headfi/speaker slot is iFi's Pro iDSD Signature. Cans of choice are Final's D8000 planars parked on the Buddha head. Our trusty German Physiks HRS-120 and Albedo Aptica speakers in the background just sit idle awaiting future assignments. Where to store an arsenal of speaker spares for comparisons becomes a good question for any home-based hifi reviewer. In my case it's the office. Another two pairs sit across from these as my audiophile tool chest for that category. How many Mytek Liberty DAC 2 could I stack in their stead? I can't count that high!

Likely because it's digital not analog, Michal's volume control stoically traversed the entire 30-45dB below the average room's noise floor. Practicality hoped that the first step past mute would skip over only theoretically relevant but realistically unusable range. The average user will travel anywhere from 9:00 to 12:00 o'clock before something significant happens. That's true for normal active boxes and headfi. Thankfully DAC II remembers our last setting. Upon power-up we needn't click through the same stops again. I counted about twenty clicks per LED, ten LED before my DMAX SC5 speaker or Final D8000 headphones hit useful SPL. That was significantly higher than over iFi's 4-gang analog pot. I'd not call that starting on the wrong foot, just designed more text-book engineering like than real-world consumer. That was my one nit. The brightness of the white LED was spot on so clear without causing retina burn or late-night squints. While this deck was proper narrow, it also was proper deep for the real estate necessary to house its packed innards. 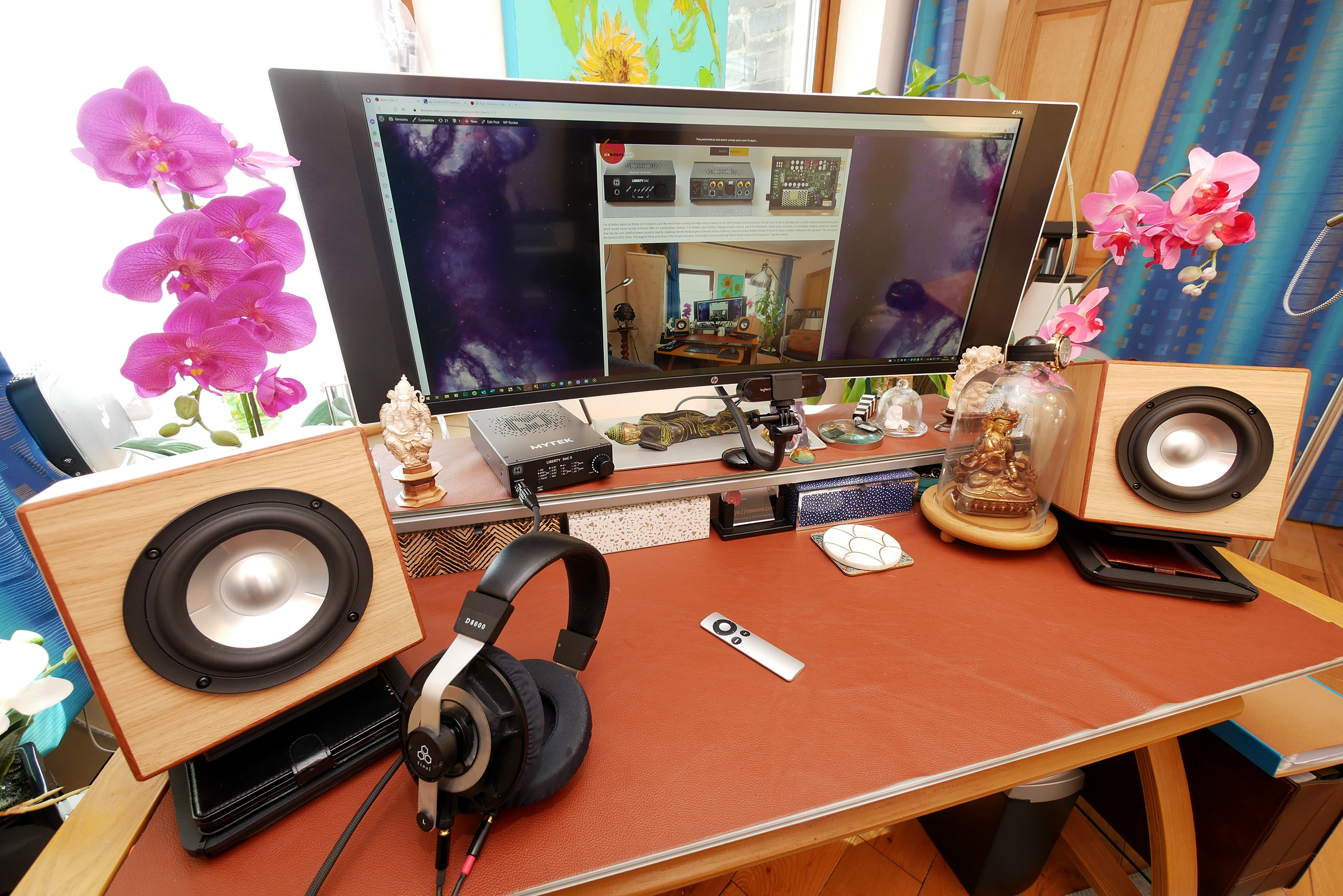 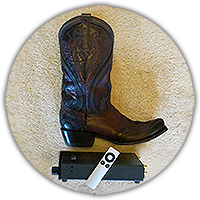 If we call that a win, our payment for it is a fine watercolor effect. There's a bit more overhang/blending of subsequent sounds. It's more fluidic but perhaps also less precise or crisply enunciated. More transient focus turns away from the fades. That dries out space. There are fewer to no Indian Summer spiderwebs floating in the breeze. There's less planktonic action between the images. It's the more matter-of-fact effect. It looks more at the comet's nose edging across the night sky, less at its lengthening fiery trail. It's more object focused so concerned with what we hear.

The other vision is more contextual. It asks what the images we hear arise in. Audio lingo often condenses this offset into here/there. Same difference. In those terms the iFi put me more there inside the recorded venue where audible space was still strong. "Here you go with your sonic images" is closer to how the Mytek served up my musical plate.

This contrast also applied to the opposing shores/doors of Richer and Leaner, Warmer and Cooler. Different facets. Listeners enter the experience through various doors then look at what's inside from that perspective. Now it's important to step away from emphatic similes used to make a point. Otherwise writerly descriptions turn caricatures. These were smaller shifts or turns so the sort our ear/brain adapts to quickly, accepts then no longer parses. Quite clearly I had my own preference but—to return to the opening theme—I could just as easily wear the other boot. Having more than one pair is fun as long as they all fit. This one fit just fine. Time to hop off the desktop into another headfi rig to take the temperature against a vintage Auralic Vega so another Sabre implementation with on-chip digital volume. Multiple triangulations are the name of this game.