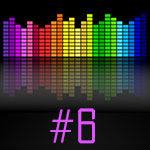 With millions of music tracks at our daily beck 'n' call, off the cloud like sweet rain on demand, here are a few which I recently cued up. We start with Julia Boutros' album Yawman Ma and the song "Shou el helo fik".

Adding vocals both female and male arrives us at "From green to green" on Mamak Khadem's album A Window to Color in a Dead Can Dance vein.

To stay with the genre, we get to Yasmin Levy's "Rak od layla echad".

Back to a glorious instrumental segues into Kol Simcha's "Those very short moments of absolute happiness" from their Noah album. Was there ever a better track title?

Staying in the watery mood flows with "Watersong" to that other Swiss electric harpist, the late Asita Hamidi and her Bazaar ensemble.

From the same Harem's Secret 3 compilation, we get to Bilal Karamam's "Mavi Pansiyon".

Then we pick the classic "Kimseye etmem sikayet" song which every mature Turkish songstress worth her sugar must record, here Funda Arar.

To wrap up, we visit the soundtrack to Subdue with Homayoun Shajarian's evocative "Ahay Khabardar".