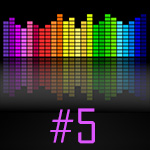 With millions of music tracks at our daily beck 'n' call, off the cloud like sweet rain on demand, here are a few which I recently cued up whilst circumnavigating the earth from the comfort of my chair festooned with choice headphones. To get the juices going, Brazil's Alcione is always a right kick in the lazy butt, here with the celebratory "Academia do Saiguero" from her Fogo da Vida album for some saucy samba.

The next destination was Costa Rico's jungle with the guitars of Jorge Strunz and Ardeshir Farah, with "Recuerdo" from their Heat of the Sun album.

From there to a Grecian island with George Dalaras fronting "Katostarika" from his Pes To Gia Mena album was a quick skip over the Atlantic.

Skipping one island over, I got to Haris Alexiou with her lovely "To Kyma" from her Orizontes album.

Next stop India, with the immortal Jagjit Singh's "Dhadkan Dhadkan Dhadak Raha Hai" from The Voice from Beyond released after his passing.

How to get from there to Spain? By way of Jordi Bonell's "Coral Pulse".

There I arrived at a Pat Metheny-esque Flamenco from Louis Winsberg's Jaleo album called "Sacromonte" for the famous caves in Granada.

Next I was headed to a faint steel-drum glimmer for a Trinidad echo before arriving in, yes, Santa Fe with Eddie Daniels' reedy "Clara's Heart" from his Blackwood album.

Staying in the Gipsy Jazz mode but scaling it back to a more traditional quintet, here's the John Jorgenson fiver with "Bossa Orpheum" from Ultraspontane.

Hitching a ride to Istanbul, here is that city's "Welcome" from Corlulu Savas' Tears of the City album.

Leaving the final word to a lady as is only polite, we close the circle with Alcione and her signature tune "O Surdo".