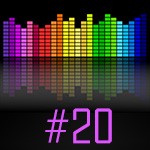 With millions of music tracks at our daily beck 'n' call, off the cloud like sweet rain on demand, today we start with a groovy 13'25" number from the Newen Afrobeat doing the Fela Kuti hit "Opposite People".

Scaling the concept down to just two on "Africa Dream" are Bilal Karaman and Jarrod Cagwin, with the former building up loops to accompany himself above multiple guitar layers.

That paved the way for some fiery Cuban salsa compliments of Yuliesky Gonzalez's Cubanero album and "Very nice". Indeed!

Slowing this simmering sauce down to bolero temps are Miguel Zenón and Luis Perdomo on sax and piano with "Cómo Fue".

That lands us in a Turkish restaurant to do dinner at the Bosporus with Sezen Aksu.

Desert becomes this shifty number from Rabih Abou-Khalil's The Flood and the Fate of the Fish.

The fishes must have said Swing me to your song because they led us to "A Lullaby from Moon" by Manushan.

Serving up this recipe to the enormous audience of the Mahashivratri festival is Shahriyar Imanov with "Pulse".

Because that was properly evocative, we come back for seconds now in a piano-led setting and a cover of the famous "Bu Gece".

For an encore, we do the actual "Encore" which Alim Qasimov, Hüsnü Senlendirici, Rauf Islamov and Michel Godard played at the 2019 Osnabrück Morgenland Festival.

Following on from the mystical mood gets us deep into Mongolia with "Buerto" from the album Gobi.

Already at the border with Russia, we cross over to the unbelievably gifted Talisman Trio and their vocal number "Tabor".

Begging for more nets us Bratsch with "Siya Le" from their last tour in Leipzig.

From here we hit Estonia with Maarja Nuut's "Haned Kadunud".

As it turns out, this made for a useful stepping stone to Ranjana Ghatak's album The Butterfly Effect with "Mirabai's Krishna".

Back in the West we are with Las Migas and their "Tangos de la Repompa" flamenco.

Winding down to elegiac speed and close out we are with Ahmet Baran's qanun on "Sizi".