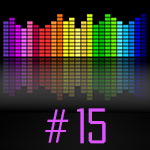 With millions of music tracks at our daily beck 'n' call, off the cloud like sweet rain on demand, here are a few ultra mellow fellows which I recently lined up like dominoes for a minimalist segue into essentials. We start with a track from the album For Love by Fahir Atakoglu.

Staying with strings but adding voice got me at Amira Medunjanin and the TrondheimSolistene and their album Ascending with the classic "Sto te nema" tune.

A nice follow-up domino was Çagri Sertel's Instant album with the track "Burden" where he's joined by cellist Çag Erçag.

Next I had Tanja Tzarovska's with "Down" from her gorgeous No Record of Wrong album.

Now it was time to ingest some mild psychotropic herbs with Mirage of Deep's "Ayahuasca".

This led naturally to Tulku's "Spiral Dance" from their Season of Souls album.

To milk the mood, Anoushka Shankar's "Prayer in Passing" from her Rise album was next.

For a bit of lighthearted lounge reggae came "The spy from Cairo" by Nafas.

Now I felt properly chilled for Bustan Abraham's meditative "Till the end of time".

Stylistically joined at the hip was Anouar Brahem's "The astounding eyes of Rita" here in a live performance.

What better way to flip my last domino with the Taksim Trio hosting Erkan Kolçak Köstendil for the song "Gidecek Bir Gün"?