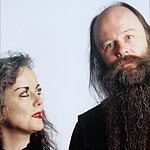 Safely tucked away behind strong dikes lies a country called the Netherlands. Although many of its inhabitants live below sea level, we reside on higher grounds in the vicinity of a national park. Both of us are from the great model year 56, making the late 60s the start of our stomping grounds. Of course radio was the first medium to bring home a variety of music. With the arrival of the Pirate Radio Stations, other forms of music entered our ears and changed the world. A schism developed between the progressive and commercial. Commercial music was a sign of bad taste. Underground and psychedelic music were the real thing. Little did we know that the same record companies were behind all of it. But we did listen to Dutch bands like Q65, Super Sister or Solution.

In Holland Woodstock had a great influence to be copied in the Kralingen Festival in 1970. This was our first chance to see and hear Santana, Quintessence, Pink Floyd, Dr. John, Soft Machine and others. Only a few radio stations played this sort of music. This made for two ways of listening to these now favorite tunes. One was to frequent one of the 'heavy' local record stores and spend a whole day listening with a group of friends. That worked for a while. When the store owners noticed too many records evaporating under jackets or sweaters, our group’s welcome expired. So we were forced to buy the records. We made deals with friends who were to acquire the desired records and share copies with the rest of us on open reel or cassette. This was the time when the magic herb played a big role in musical perception. Getting together—preferably in a squat house with enough weed to smoke out an entire termite colony—music was played, discussed, evaluated and critiqued. What was this music doing to the mind and body? Did it make you happy, dance or make love? What should the ambiance be – bright lights, candles, aromas, jeans, jalabas, nudity?

At home it first was a Garrard turntable atop a wooden box with a home-made tube amplifier; or a little Lenco integrated turntable and amp with plastic loudspeakers. Spare time was spent playing in several bands, all monies earned invested in huge Marshall towers. Two Marshall towers made for great stereo. None of the bands were a success and listening to music was put aside for a while. The time for big cars and motorcycles had arrived. Moving house and more or less rebuilding the new one consumed much time. For R&R the record collection spun on a Dual turntable, its plastic console replaced by a heavy sand-filled one. Reading a then-popular Dutch magazine called Audio & Technique, a DIY speaker design looked appealing. A piece of PVC tube normally used for drains formed the basis, with two Focal units for drivers and a second piece of PVC tubing inside the larger tube making up the remainder. As an amplifier an old E84-based Lafayette LA 224 worked just fine.

After some reworking the amp sounded even better with silver wire, new tubes, better caps and upgraded speaker terminals. A sort of new hobby dawned. Meanwhile a new medium entered by way of the CD. Picking up a first-generation Philips CD100 CD player, the advantage of scratch-free records was reason to start swapping the battered LPs for little shiny discs. Many guilders—the now defunct Dutch currency—changed owners in the record stores. The amount of CDs rose commensurately with our income, especially after we launched our own company. The home-grown audio setup brought music to life, made us cry and laugh. We were happy with the sound. Going to many Rock and Jazz concerts, the (in retrospect poor) sound was not that much worse than concert sound. We could and did live with it.Then a friend seduced us. With an engineering background he switched from being a radio amateur to being an audiophile. We blame him for the SET addiction. When we had money to spare, we invested in a CEC TL5100 belt-drive transport, an Audio Note DAC2, an Audio Note Meishu 300B SET amplifier and a pair of Audio Note AN/Jsp silver-wired loudspeakers with Silver AN interlinks and Audio Note copper for biwiring the speakers. The reason for this choice was the laid-back sound quality. We were used to an in-your-face sound with heavy emphasis on the extreme regions of bass and treble. With the AN setup there was less bass emphasis, a smoother treble and a great natural midrange.

The Internet is a great place for gathering information and it's here where we found references to and writings by Dr. Harvey 'Gizmo' Rosenberg. Collecting and reading his attributions to various discussions and articles, we felt somehow connected with this free spirit, his love of music, technique, art, motorcycles, wine and all the other things that make life bearable. In short, it all came down to the Search For Ecstasy, be it musical or otherwise. We started corresponding and followed some of his advice regarding our installation. This brought us to Paris where at Triode et Company run by one of the most charming men in Audio, Philip Heitz, we listened intensely to a combination of Audio Note amplifiers and Avantgarde Acoustic Trios and Duo speakers. After many visits we decided to acquire a pair of the silver-wired Duos. 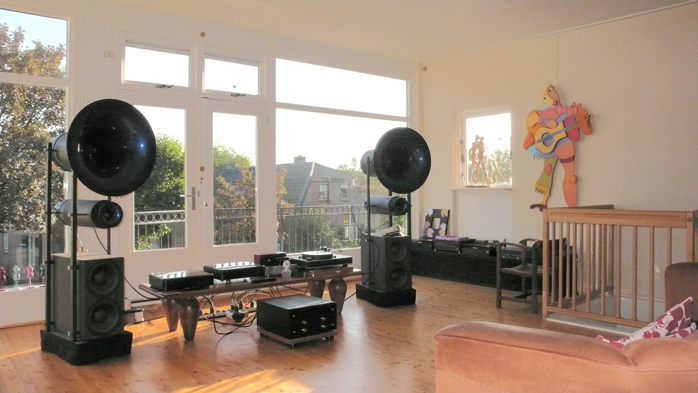 Gizmo also notified us of the wonders of home-brew silver speaker cables. The costs were low, the fun great. Back in Paris we picked up some round cotton tubing at Bouchera's to sleeve the fine 18-gauge silver wire from Marlon Toback in New York. Result? Two tri-wired Duos.

Needless to say, all our equipment is tweaked. Where possible we've used silver wire and Black Gates caps. Tubes are rolled heavily. For 300Bs we choose from various makes and adjust the sound of the system to our liking. The contacts with Gizmo, live and virtual, led to the idea of setting up a Benelux Triode Guild.

The BTG was planned to help lovers of triodes advance on the path to musical ecstasy. Gizmo's latest concept the 4th Wave was based on this idea: "Because each of us is a musical instrument, our job is to express the music in us. To do that we must 'tune' ourselves. And we do that by tuning our music system, which is an analogy for our musical consciousness."

As part of the 4th Wave Gizmo was planning on supplying kits to build fully tunable amplifiers and loudspeakers. The Triode Guild Benelux would take part in distributing the idea and kits. With Gizmo's passing, the Triode Guild and the 4th Wave as such need new impulses. Please e-mail if there is interest.

What beauties hide in our drawers today? Two main influences have steered our musical travels. After the psychedelics of Soft Machine, Ash Ra Temple, Gong and others, it was Frank Zappa who opened new doors. His quotes of Edgar Varese and other classical composers in his own music made us explore the classical department. When played with passion the heavy stuff from Wagner to the light fare of Mozart is simply marvelous.

The second major influence was Miles Davis. We stepped in during his Pangea and Agartha period. A whole different world opened up. The beauty of Miles' live concerts at the various North Sea Jazz Festivals introduced us to other jazz greats playing at the festivals. We followed Miles back in time and discovered more legendary performances of stellar musicians. World music came into our lives through a friend who owned the Lucho record label. All kinds of Latin American music appeared on our plate, including the most emotional of them all, the Tango. 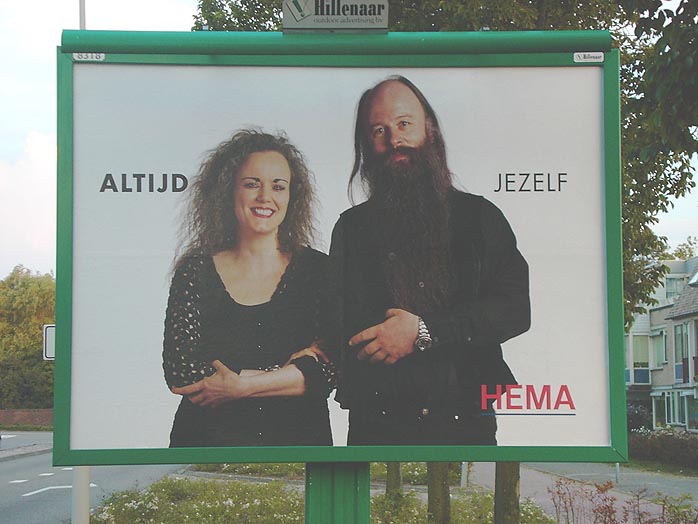 As long as music is played with heart and soul, what sort it is becomes irrelevant – including audiophile recording quality if that even exists. African music recorded live on a cassette tape can be more stimulating than the same music recorded in a studio. There is so much music to discover and trigger our hot buttons! There are only a few negative tendencies in modern-day recordings. Most CDs are too long. Instead of just a handful of pieces or songs played and recorded with love and emotion, there are 70-odd minutes per disc. The old LP with its limited capacity forced musicians to record only the best songs from the best sessions. Now a lot of crap is added for filler – quantity before quality.

No wonder downloads of that one song from that album are so popular. Purchasing CDs has become a past activity. New music comes to our house via the Internet or on vinyl. And how do we listen? In two ways. For reviews of albums, the record is played several times as background music during reading. This eliminates the surprise effect. After two or three spins the real listening can commence. That occurs with remote at hand and a laptop for notes within reach. We are honored to be able to publish our reviews of equipment and music in the leading Dutch audio and video magazines and websites.

Real listening is a different beast. Most of the time a sort of play list is composed. That could be assembled on the basis of musicians, composers or genre. According to the play list, the atmosphere in the room can be adjusted by means of lights, candles, aromas and what not. Little has changed over the past 35 years.

An ad for 6moons next time? HEMA is not only HEnkMArja but also the Hollandse Eenheidsprijzen Maatschappij. In the olden days Hema sold everything at the same price. Now they changed their philosophy to sell only their own brand Hema – good quality for a reasonable price. We were asked to participate in the campaign. Altijd Jezelf means always yourself…