Self-propelled trainers or the winged sandals of Hermes. Sitting between 35 to 45 on P1's display which tops out at 100 to suggest 0.5dB increments, my chin hit the floor and drool started gathering in a puddle. Hit delete. You'd not buy such language from us. What then to write to express equal surprise? Removing one interconnect, four connectors and two autoformers from the signal path improved the sound. The less-is-more part of the audience will say "of course". They'll shake their heads at anyone who'd think otherwise. Observers for whom direct always goes lean will rush out private emails to ask what I really thought. Surely deep digital attenuation betrayed some flaws? To nip all such inquiries in the butt, whatever losses Gilles Millot's attenuation algorithm caused were less than what the extra bits in my longer signal path inflicted. If I owned P1, I'd run it amp direct and retire my separate linestage. Period. That's even though my eyes can read our bigger brighter display better than Lumin's.

After wiping the floor, we need to specify what improved: image pop, contrast ratio and depth. Those are quasi visual qualities which listeners into soundstaging would key into. For those triggered more by energy transmission, the autoformer-attenuated Lumin sounded not quite as awake or rhythmically adroit. Those concentrating on textures would instead pick out crisper edging and firmer control when the Leedh code controlled the levels. It's why this page opened with self-propelled trainers. Shoes don't walk by themselves. At these rates of cut, neither does the usual digital attenuation. Millot's invention thus did something unexpected and new. That warrants some saucy turns of phrase. I obviously can't separate code from Lumin's output stage. I can't issue a generalized guarantee that Leedh attenuation will always win no matter the output stage following it. What I can say without personal doubt is that in Lumin's implementation, Leedh Processing won.

That was extra shocking because given our Terminator's voicing, my amplification of choice here is fast and lit up via Enleum and Kinki Studio. If anything drifts into the weeds of white, pale, lean and lightweight, these electronics say so in a hurry. But they didn't. Amp direct sounded more articulate, firm, fully arrived and physically here than detouring through my favorite preamp in our collection. That mirrors Joël's findings. He prefers Leedh to his passive spl preamp and direct-heated triode specimen from Canada's Israel Blume. Upon reading this, he'll just shrug his shoulders with an 'I told you so'. Adding weight on my end is reminding readers that my previous favorite preamp was Vinnie Rossi's Signature with direct-coupled Elrog ER50. That's before Pál Nagy's passive magnetic usurped the triode spot for still greater immediacy and presence.

Running with less baggage. For those downscaling their hardware count but unwilling to sacrifice sound quality, Lumin's P1 would seem to be an ideal mix of features and pedigree. It's also true that at present, the enforced network connection could surprise those who'll never use the network for music or meta data. Until a firmware upgrade removes it, a wired connection to your router is needed to loosen the circuit's brake which otherwise niggles with 'network error' and never leaves 'park'. Also true, once that connection is firm and your router online, you can play music through a legacy input so not over RJ45, bypass the Internet, chuck a WiFi tablet remote and set input and volume with Lumin's classy IR wand. Obviously Lumin would have preferred me using their network features. Those have been covered elsewhere en masse, even in our own pages by hardcore brand fan Joël Chevassus. I thus took the liberty of shifting streaming burdens to our trusted hardwired iMac. That avoided any WiFi, a small tablet display and forcing the latter to screen-share with the big Mac. I could now focus on pure sonics where my only small criticism would be P1's lighter handling of dynamic gravitas. That had its scenic tour stop at vantage points called light-filled micro detail, great agility and high image specificity. Its most special and unexpected virtue was its French attenuation algorithm. Against all normal odds, that delivered on the promise and should be of great interest to those who've always appreciated the technical argument—that less stuff in the signal path is better than more stuff—but in actual practice found the opposite to be true. For me and in the context of our room and system, P1 played the part of proof positive that this technical argument and in-the-seat reality could finally see eye to eye and ear to hear. My context for this observation was having already assembled our system to work best around a passive-magnetic volume controller. Running P1 amp direct was even more direct, open, exciting and in-the-room present. That was unexpected news to me. 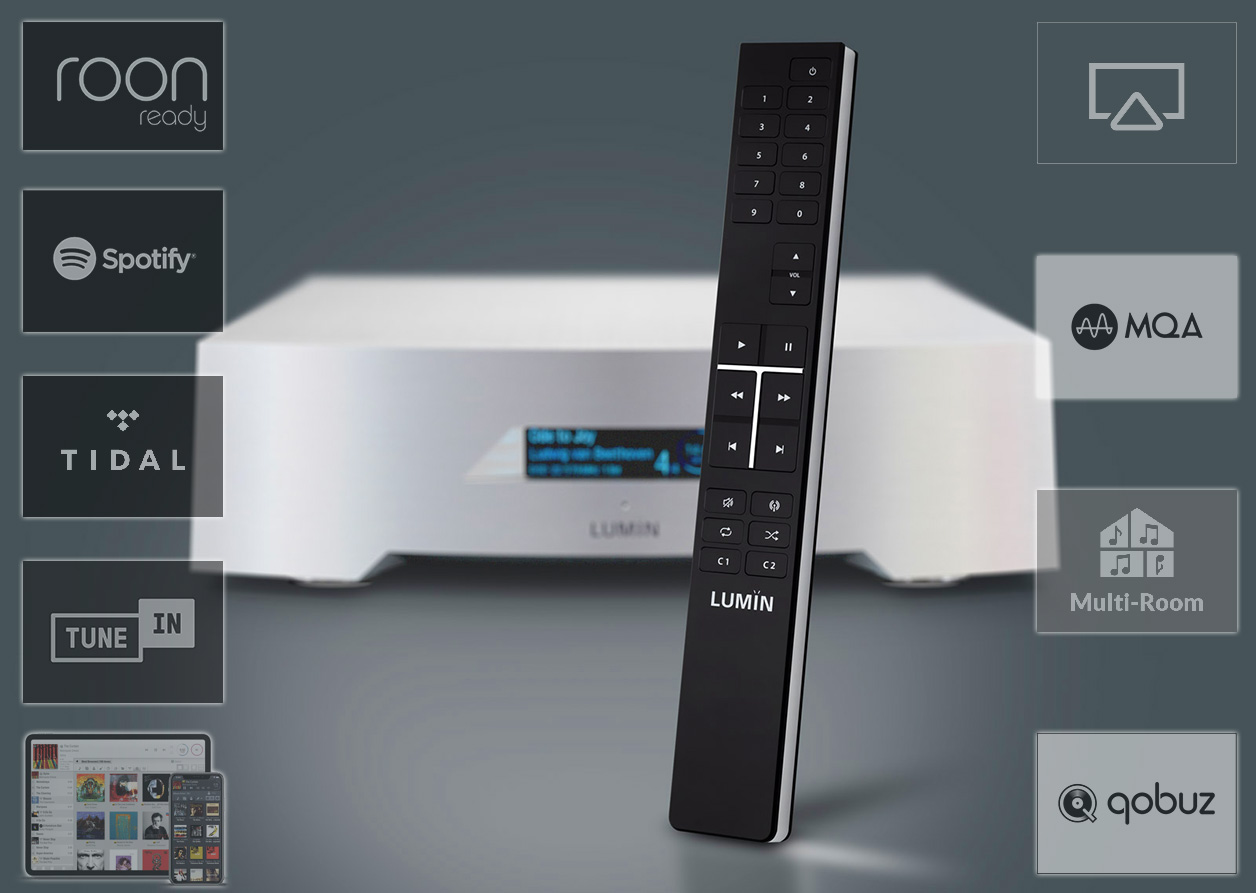 Did I mention that this machine really is one sharp looker? Fine sound and fine looks can indeed combine to lifestyle hifi on a very high level. And what is investing in an upscale hifi and using it on a daily basis if not a very specific lifestyle? Any negative connotations associated with the term are long overdue for the landfill. If P1 were a tractor, it'd go compact that fill and lay monster tracks all over it. But it's more of a fast cabriolet. It lets the sun in and goes places with little luggage in the trunk because it combines so much functionality in a single chassis. Now P1 is shorthand for Perfect One.

Postscript. No sooner had the virtual ink dried than reader Michael Fanning struck. "I just finished reading your review of the Lumin P1, including analysis of Leedh processing vs. external preamp. Your findings mirror mine: Leedh processing is superb and obviates the need for a separate box. I run my Lumin T2 direct into my Kinki EX-M7 and use Leedh processing as the digital volume control. Couldn't be happier – unless of course I had the P1's extra sauce of femto clock, dual toroidal linear power supply, fibre network isolation, Lundahl output transformers etc. Oh well, aspirations are always welcome. But Joël should be smiling today?"

I thought that he probably just sighed. "Way late to the party, buddy. But better late than not at all".

Lumin reply: "Thanks for your review and take on non-streaming usage. Now even old-style audiophiles can use a Lumin. I see our IR receiver ball in your photo. That wasn't needed. P1 has a built-in IR eye in the front. The separate IR ball is for other Lumin players without built-in eye to use our physical wand as we now offer a IR eye remote control upgrade kit for all our players. And Joël too is interested to have a look at this machine so could you please send it to him like last time when you forwarded him the X1?" I sure could. Here triangulators spot an upcoming opportunity to compare our findings and have Joël fill in comments on P1's streaming functions. "Other minor things, the Tidal track which played when you first tried it was because Alex, our designer in the UK, forget to delete his playlist in the machine. Also, despite needing a network connection to function, we haven't yet collected any user data. While we have at times thought that some user stats might help us refine future product, so far we haven't performed any data mining. And I certainly agree that P1 needs to lose the network connection requirement for non-streaming usage. I'll see how to do this in a firmware update." Li On, Lumin Music

It's always lovely when manufacturers embrace constructive criticism in the spirit intended: to further refine their product and broaden its appeal even more. Bravo.