"I awoke to what's euphemistically called birdsong. It was more of a bloody racket, nine parts screeching to one part singing. In England the dawn chorus is genteel and melodious and inspired poets to wax lyrical about sparrows and larks ascending. It's blessedly short too. The poor creatures, demoralised by the damp and cold, sing a few bars to prove they're still alive then pack it in and get on with the day. Things are different in Calcutta. There are no larks here, just big, fat greasy crows that start squawking at first light and go on for hours without a break. Nobody will ever write poetry about them." From A Rising Man by Abir Mukerjee [Harvill Secker, London]. Crowing so wasn't on the X1's docket. Genteel was. If anything, I wondered. Did Lundahl's Swedish iron inject a wee bit too much pastoral elegance? Did it bleed out some vitality, scrub off a certain tension in the process? Amongst other things, it had been the element of drive—propulsion, urgency, grit—which returned me to transistor amps. That was after a sabbatical through mostly single-ended tube land and its sunny climates of 45/300B/6CC3. Names like Ancient Audio, Art Audio, Trafomatic, Woo and Yamamoto spring to mind. The X1 could undoubtedly do mellow, elegiac, elegant and gorgeous; more no-feedback triode than feedback pentode. That was different from LampizatOr's DSD-based flavour for their SuperKomputer reviewed just prior. Having met the X1's particular relaxed effect before, for enablers I'd nominate its output transformers. If so, it'd be a mark of distinction. It'd separate out from the pack of fundamentally alike digital. 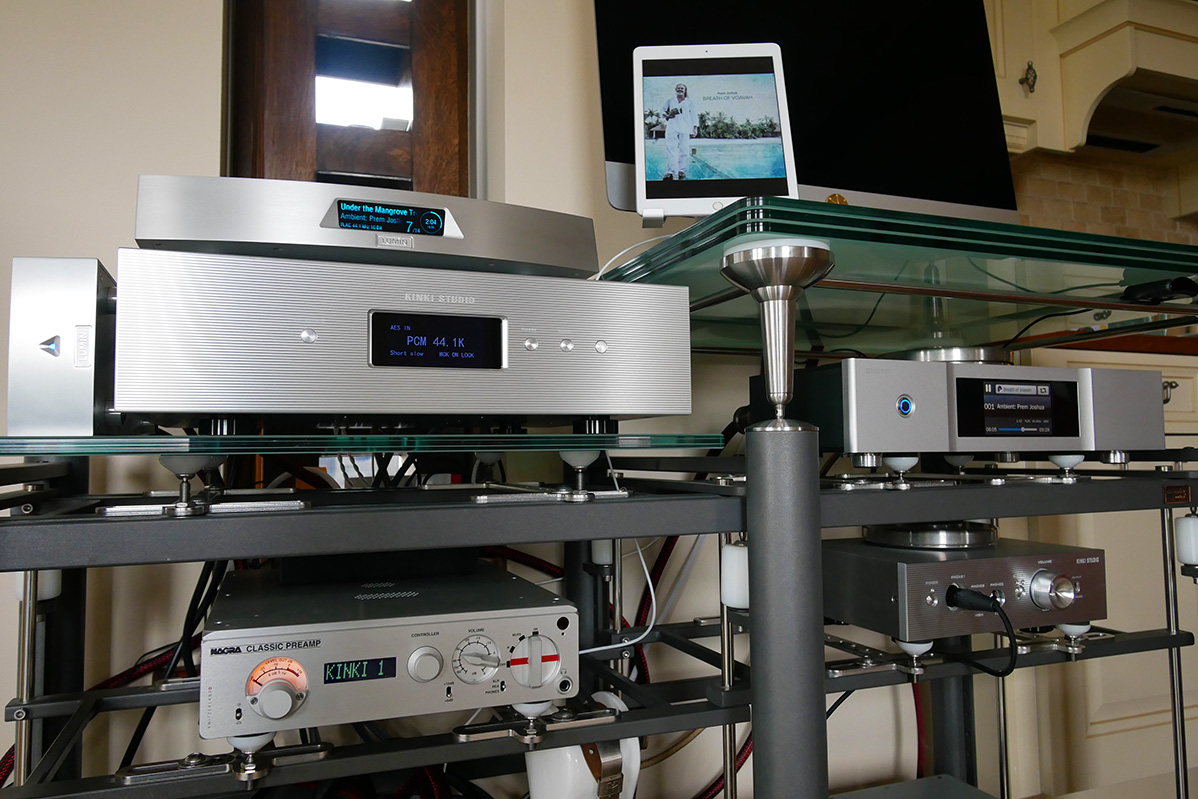 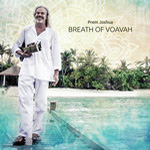 Comparative sessions showed tonality very similar to the Vision DAC-1. This placed the Lumin firmly on the robust materialistic well-saturated side where tone isn't glossed up like Photoshopped cover girls but instead allowed to exhibit naturally matte, dry but warm textures. Functionally, it did the job in one far costlier though smaller deck where I otherwise needed two bigger chassis and more cables. Even though the Soundaware too can be accessed via tablet—I've not done so to know what the GUI of its recommended apps look like—it's not accompanied by its own app. And whilst Soundaware and Kinki build very well, on sheer styling and carved-from-billet curviness, the X1 still took the lead. Part and parcel of its app are processor tweaks on word length, upsampling and resampling of PCM to DSD128. Particularly the latter makes for à la carte seasoning. 'Remaster' your entire PCM library to DSD on the fly. Do it strategically for select tracks or fancies. Don't do it. You're boss. With file-based music, accessing specific albums/tracks quickly is key. So is snappy playlist creation. Here Lumin's app explained why it's held in high regard. It's a mature piece of code writing. It has crisp graphics with full featurization. It represents serious in-house IT chops. Other houses hide their lack behind 3rd-party apps (easy to do when Roon reigns popular); or cruder attempts of their own. Lumin offer a truly complete package that's been massaged from industrial design to friendly usage to build to sonics. And yes, its sonically distinctive feature, subtle but pervasive like a quiet undercurrent, was this more 'genteel' gestalt. 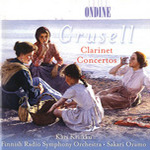 Because that wasn't accompanied by any ethereal lightweight tonal balance, it didn't generate a mood of 'all float, no punch' to adapt Muhammad Ali's mantra. It simply retained a certain civilized suavity. This suggested that its target audience will prioritize sophistication and not call classical music fit only for old fogies. The X1's purity really did luxuriate in classical. Of course good hifi plays anything you feed it. Just so, listeners experienced with swapping hardware know. Particular kit appears to guide our hand. It has us reach for specific music. If one stands back to watch this unfold without volitional interference, one may end up with a "X does particularly well at xxx" thing. Looking at what music I streamed, a high percentage was minimalist moody fare à la ECM, Kirkelig Kulturverksted or Al Gromer Khan's even more chilled paisley music: layered, atmospheric, less-is-more stuff with lengthy decays and the quietude to follow them through. It's where subtlety dominates over raucousness and how many speed notes can cram into a bar. The X1 knew that game too. But by temperament, it led more often to introspective fare. I also pulled out small-scale classical and chamber music. Think Brahms Clarinet Quintet, Schubert's Octet, Crusell's concertos with Kari Kriikku as soloist, the Dvo?ák Serenades. That seemed suggestive. Now to some screen shots to convey a feel for the Lumin app's skins. 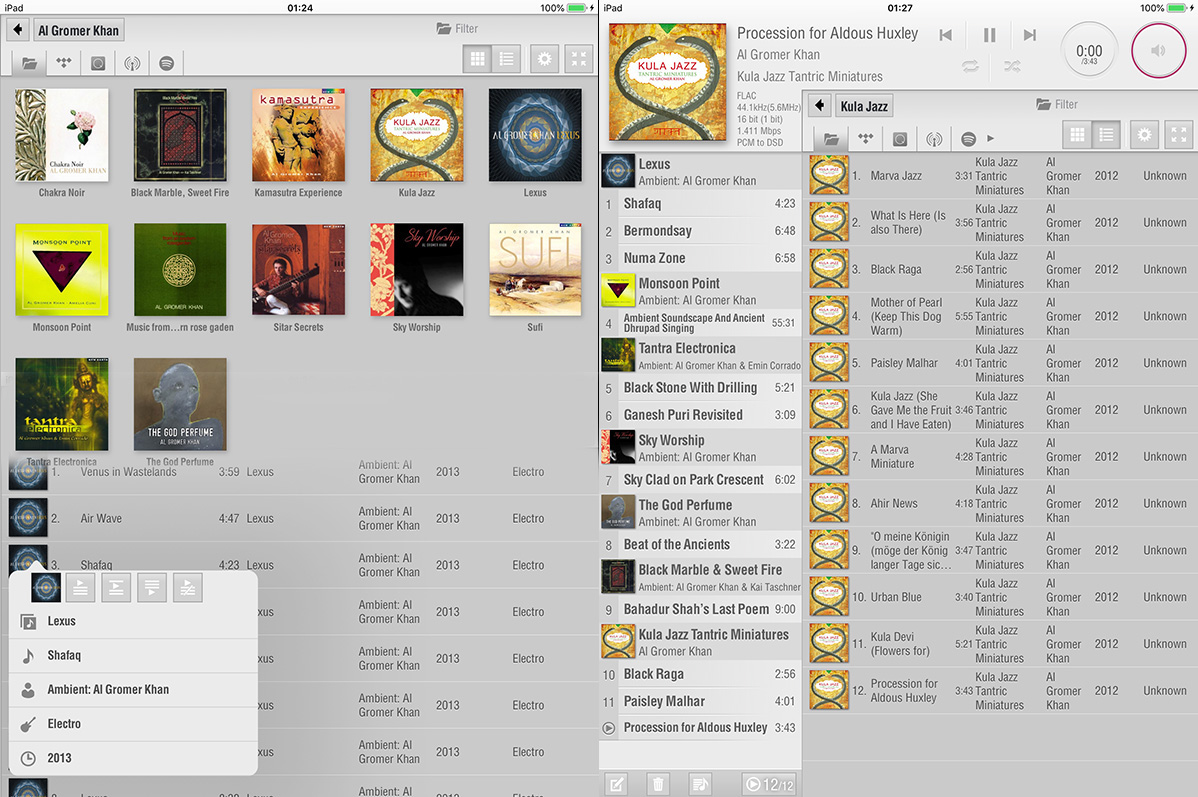 At left is looking at an SD card folder containing 12 albums by the same artist. On the split right screen, we see a playlist assembled on one side, on the other the open folder of the album from which I'd just pulled the last three tracks of the playlist. As indicated at the very top, the very last track was playing just then in PCM-to-DSD mode. 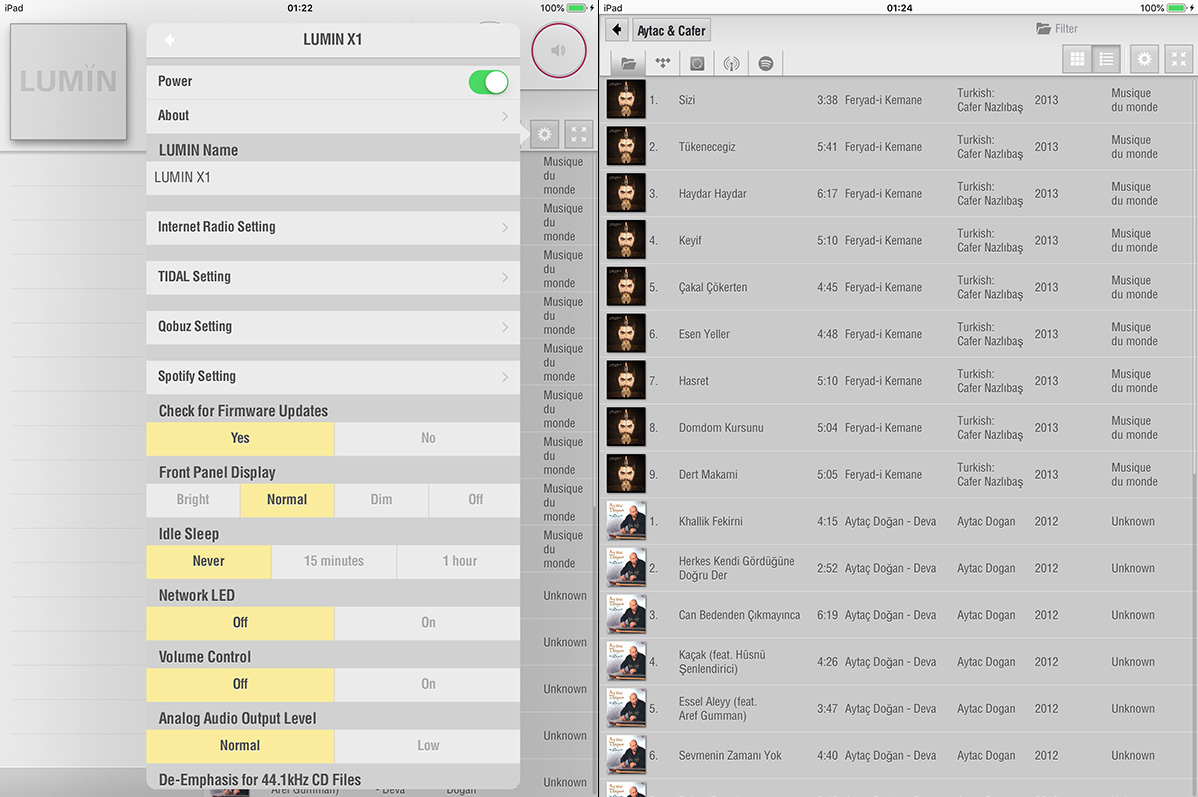 At left, a fraction of the app's Option menu. At right, the contents of a folder containing two albums enlarged to full screen. Note the proper rendition of non-standard letters from the Turkish alphabet. Those cause Soundaware to insert Chinese glyphs instead and have tripped up many prior servers coming through. 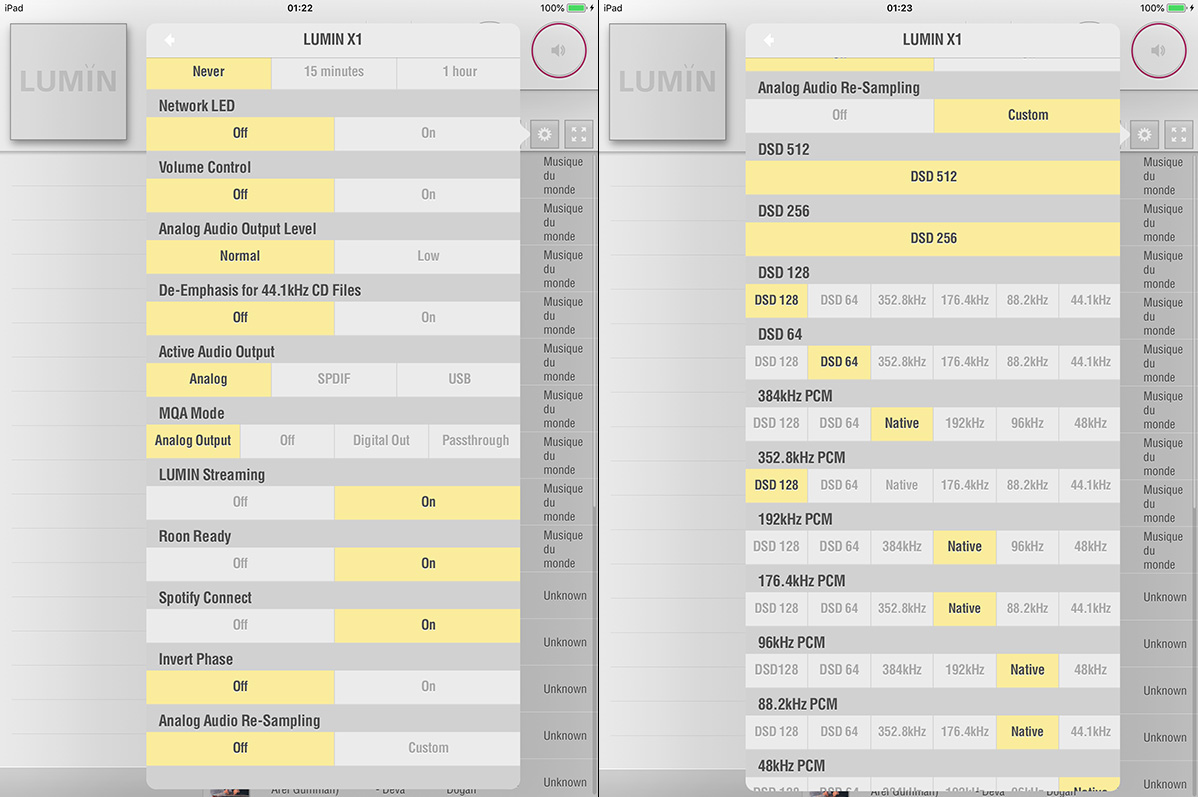 At left, more items in the Option menu; at right, the Analog Audio Re-Sampling Custom window presents its choices.

Like its tag, the X1 isn't for beginners; not because it's difficult to use. It's not. First-timers simply wouldn't recognize its sophistication to appreciate it for what it really is (rather advanced). To reiterate, unlike USB DACs playing locally hosted files, this networking deck quips 'error' when your network connection goes down. Unlike just streamers, it includes a high-quality D/A converter. Unlike servers, it contains no storage memory. Whether by subscription or network-attached storage, you need to bring music to it, not get it out. If your tunes live on a Mac as do ours, consider Audirvana Plus 3 as your UPnP traffic cop and defeater of non-audio computing activity to optimize an Apple for music. You'll never have to scan when adding tracks. And the Lumin app is a joy all around. Getting to the X1's socketry tucked beneath the deep back overhang is far less so. But feeling aggravated should happen only to career wire wranglers. That's not regular users. They do it just once. As a device connected to the Internet through your home network, the X1 is fluidly updatable. Hence the Lumin app is preconfigured to automatically check for available firmware upgrades. Unlike the olden days—pack up machine, ship back to factory, get MkII upgrade installed, ship back, pay money—X1 type gear is rather more advanced. It upgrades itself without ever leaving your rack. For free.

Who is it for? An audience with money who wants turnkey integration, non-PC cosmetics, top PC functionality, silent operation, Roon ready, MQA, DSD, Qobuz, Tidal, Spotify and sophisticated sonic elegance. It fully expects to use tablet remotes. Here even the rare WiFI allergic has learnt that an iPad may be hardwired to an RJ45 socket. Reliance on WiFi remotes—note to self!—no longer is an excuse to X out this Lumin X1 from consideration. Fanciers of SD cards for playback will enjoy the Lumin app's USB Server facilities with full cover art, search/sort functions and quick playlisting. Really, this is perfectionist hifi done right. It means the complete package with zero excuses. Considering Lumin's track record and this being their 2018 flagship, that probably shouldn't have been a surprise. But then, I'd never done a Lumin before. On staff, Joël had; thrice. Dawid had twice. The boss had sat it out. Until now. So yes, the X1 proved to be a really dialled proposition. Thanks to Li On for setting me up with a pre-configured iPad, the adaptors to hardwire it and the optical converter kit. Otherwise I'd still be uniLuminated. But now I've seen the light; or heard it as it were. I feel like a proper lumineer – a Luminear…