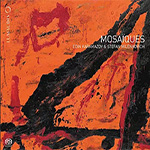 The emailer was Marin Fulgosi. "It's been a good while since we've been in touch. I moved back from Ireland to Croatia to start some very interesting projects. With my good friend and excellent conductor Tomislav Facini, I founded the Antiphonus Ensemble which over the past ten years has profiled as a most prominent vocal ensemble in Croatia. As well I founded the Lumaudis record label with lutist/guitarïst Edin Karamazov and businessman Daniel Vukov who previously owned another German label."

The first five hybrid CD/SACD Marin sent me—I don't do their alternative medium of vinyl—came in fine canvas-type covers imprinted with Emil Schumacher paintings for evocative outside art. Extensive liner notes and foam disc retainers with black cardboard edging for zero plastic completed the packaging. The titles included Ne le tue braze u tvoje ruke with the Antiphonus vocal ensemble for 13th-17th century early music; and Reminiscences, an assemblage with Edin Karamazov on guitar plus strings, of six Sting songs substantially re-imagined by Dusan Bogdanovic plus seven Beatles songs similarly reworked by Leo Brouwer. There was the Roman numeral XXI, a Karamazov solo effort on lute; and Séance, an album of guitar/cello duets between Edin Karamazov and Boris Andrianov. Finally there was Mosaïques, a guitar/violin exploration between Karamazov and Stefan Milenkovich. 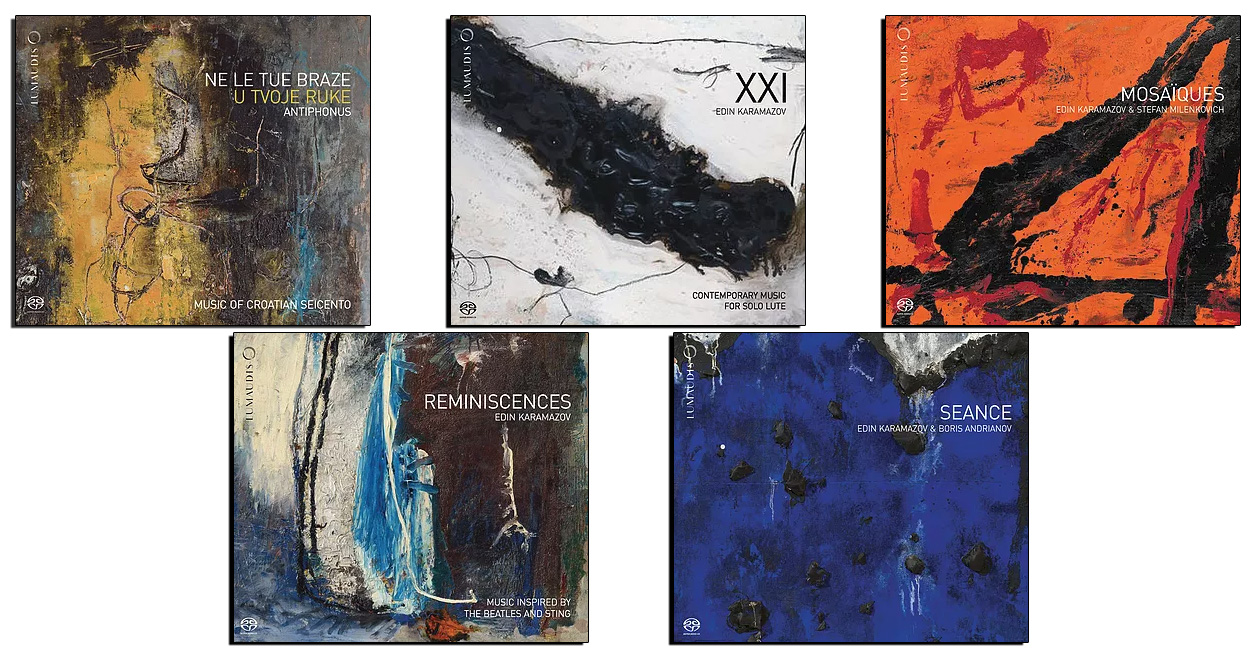 The launch of any new audiophile label which dedicates itself to top-quality sound and musicians/styles shunned by the mainstream ought to be cause for hearty applause by anyone who hates that falling technical standards and narrow commerce-first choices have become the new pitch black not vibrant orange of the recording arts. Whether we personally appreciate each and every new release on a budding specialty label like Lumaudis, Tonian Labs or trptk is immaterial. The far more important point is acknowledging their efforts. Like prophets in the wilderness, they invariably start as a pure labor of love by passionate creative folks who must carry all associated costs and often never break even. That said, I was also sent these first five Lumaudis releases for review if, after listening, I felt so inspired. Wherein rubs the lie.

Of seven releases on the newer Dutch trptk label thus far, I've really only liked one. For me, the others were too experimental and abstract. There I'm not alone. I met one of the label owners in Munich. He confided that they'd already decided to reduce coverage of 'experimental' works to just one out of ten forthcoming releases. With my present trptk percentage, consider me just a bit cautious. Of the initial Lumaudis crop, I found the deconstructed/reassembled Pop tunes of Reminiscences, for guitar and six strings, interesting but not really something I'll revisit. It's one thing to explore the liner notes. Here the re-composer explains his juxtaposition of a motif from Bach's Cello Suite N°1 with odd-metered Balkan elements for Sting's "Every breath you take"; setting "Message in a Bottle" to a West-African polyrhythmic groove; or "Roxanne" to a Baroque passacaglia form. It's musicologically intricate and clever. But actual hearing it didn't completely move 'interesting' into 'persuasive'. My wife felt likewise. We both failed the test of intended audience. If Lumaudis added a sampling feature on their website as they really ought to, you'd be able to listen in and decide for yourself.

Audiophile recordings are often the butt of jokes when it comes to their content. Swiss yodling accompanied by four alp horns? Obscure white man's Blues recorded in a Swedish church?

How about works for solo lute? This should squarely depend on your appreciation of classical and even earlier chamber music, albeit one that's often enhanced by more abstract interludes. Be it Edin Karamazov's immaculately played material on XXI or the early lithurgical/courtly choral music of the Antiphonus album with its pre-Baroque strings, one must enjoy such fare though even without that developed taste, one can still delight in the glorious timbres of particularly the purely instrumental numbers on Ne le tue braze. 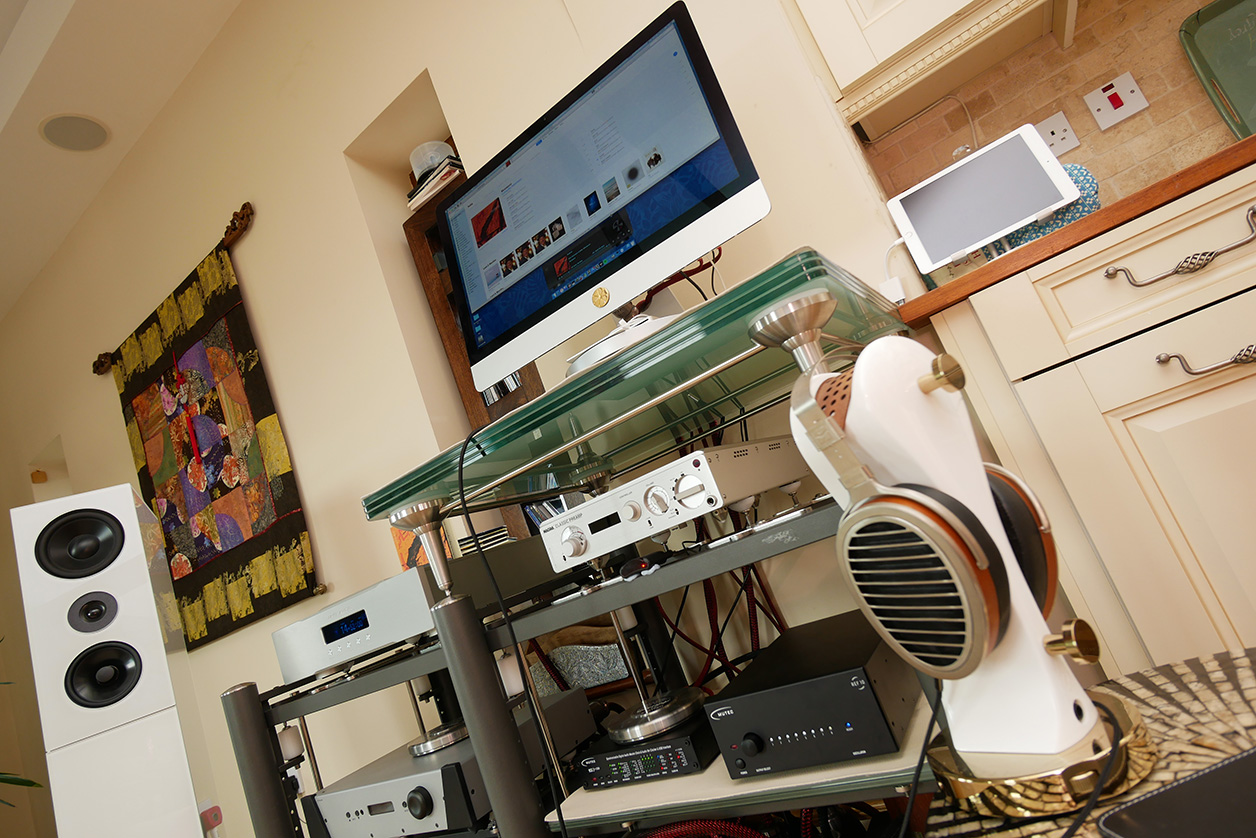 Likewise for the Karamazov transcription of a J.S.Bach praeludio for cello and lute on the Séance album. Meanwhile Erkki-Sven Tüür's modernist "Spiel" which follows it passed me by entirely. That's true also for most abstract modern sculptures as one spots them fronting/defacing a court house or big inner-city roundabout mound. I don't understand their selection committees. I do appreciate the desire for new repertoire especially with a poorly served instrument like the lute. Yet there's most excellent reason why the old masters remain perfectly relevant centuries later whereas the modernists starting with Hindemith get very little play. So hit 'n' miss—mostly the latter—was emblematic of my time with these first five Lumaudis recordings. To engage in delight meant being extremely selective to avoid the contrived, the abstract or the otherwise too elitist as in, demanding hard-acquired rare taste which this conservatory-trained musician didn't possess. In conclusion, I'll applaud the launch of this new label from Croatia which entered our scene with such splendid sonic and adventuorous programmatic ambitiousness. But I'd also ask for less abstraction and narrow appeal so that more people will want to partake more keenly and often. After all, popular music and fabulous music aren't mutually exclusive classifications…