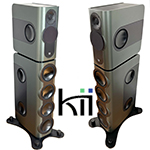 This review first appeared in December 2022 on fairaudio.de. By request of the manufacturer and permission of the author, it is hereby syndicated from the German original to reach a broader English audience. Ed. 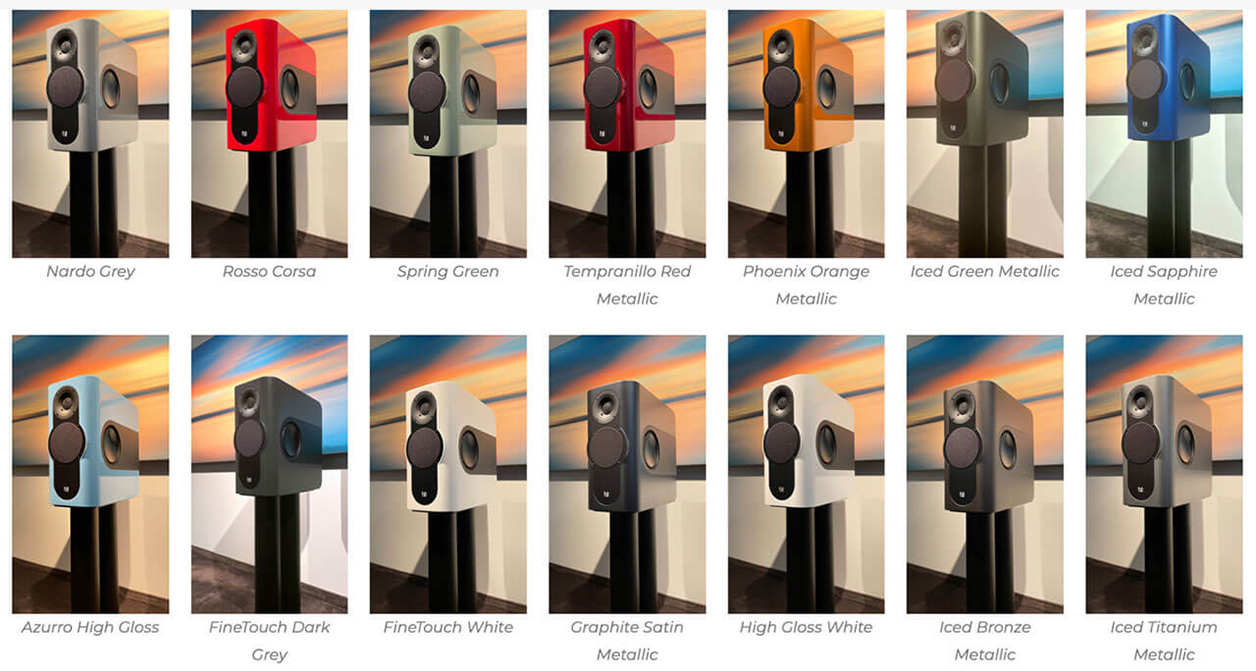 To Kii or not? If you've looked hard at this speaker concept, that's the question. Where answered in the affirmative with the compact Kii 3, sooner or later the follow-up question becomes whether to BXT or not. At €29'775/pr for the stack or €14K for just the add-on bass docks, this implies no classic subwoofers despite true depth mining. Short for Bass Extension System, the BXT is really an expansion of the Kii 3 concept. It's why the company avoid the 'subwoofer' tag which traditionally just bolts on quite narrow bandwidth. Now you ask why one should need more bass. This requires brushing up on radiation patterns, reduced driver stress and related distortion suppression. For starters, let's revisit the active monitor. The 3 above is a heavily DSP-assisted compact 3-way tweaked for time fidelity whose bandwidth in standard rooms puts significantly larger speakers in the rear-view mirror. Clever DSP steering exploits anti-phase cancellation between lateral and rear woofers to establish a cardioid dispersion pattern whilst compensating any involved time delay. This radiation control significantly attenuates how much bass reflects off the side and especially front wall to undermine big room-mode issues. In practice there's extra multi-stage boundary EQ to compensate frequency response depending on placement. There are also 14 more memory EQ options with various shelving filters to account for personal taste. 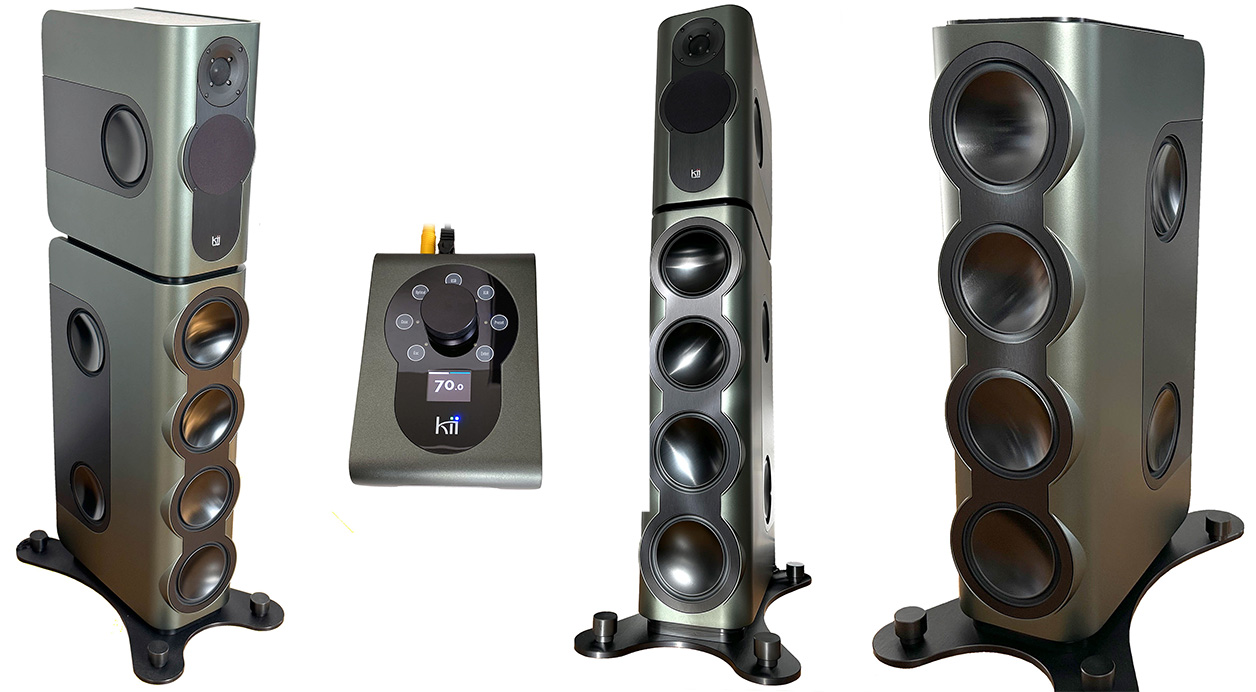 This friendly user interface called Kii Control allows even kids to access all this advanced operational IQ. I recall a chat with CEO Chris Reichardt who called most audiophile systems "extremely antisocial" because only one person is allowed—or even knows how—to operate them. Visiting friends or relatives are alienated. The Kii 3 begs to differ. It's curated for high convenience. As designers Tom Jansen and Bruno Putzeys explained, over time more and more clients starting asking for a bigger Kii. The team responded with a modular system which allows owners happy with their monitors to scale up without first being forced to sell off. Instead they dock their boxes atop the BXT module. Now the grown-up stack reconfigures itself automatically into a different fully integrated loudspeaker with new options to shape the dispersion pattern. For creatives like Putzeys who thrive on challenges, that presented a new sand box to play in.

Like for the monitor, a Black Forest subcontractor provides the raw polyurethan shells of the BXT. Immaculate gloss or satin lacquers then dress those up. Each BXT packs eight 6-inch woofers. Each is fronted by a Bruno Putzeys 250-watt Purifi class D amp. Plus the 1.5KW built into the head units, this adds up to a colossal 7'000 watts for a 2-channel system. Music of course isn't static. Extreme peaks are over quickly. On average, Putzeys sees users listen to 15-30 watts with their monitor and the same goes for the BXT. A clothes dryer consumes 100 x more. And while we're at heat, these Purifi amps are cool cucumbers. Even after spirited SPL my hands detected no increase in enclosure warmth. The form factor continues the III but inverts the drivers. Whilst that may look somewhat inconsistent, it's pure Physics. Look closer and you'll appreciate how the head's woofer quad gets mirror-imaged at perfectly matched spacing. It's the only way to continue the cardioid line-source pattern which, we're assured, is not to be had anywhere else. 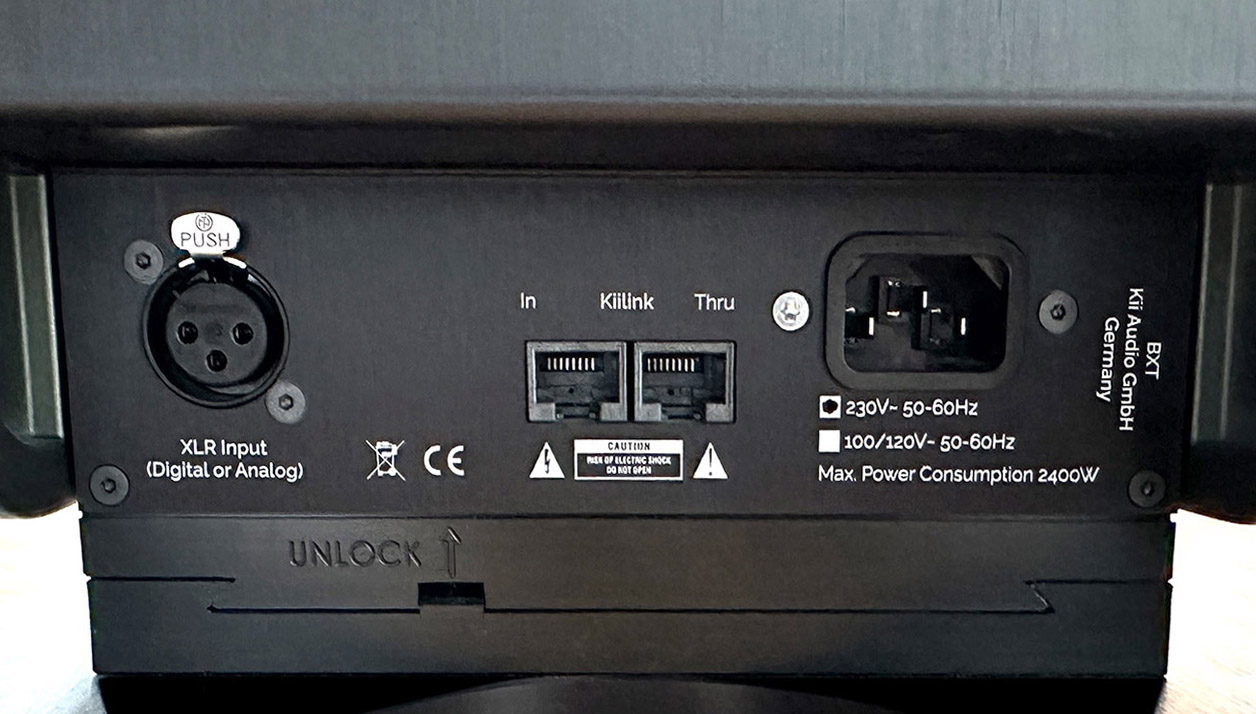 A new bottom plate bolts to the Kii 3 which now slides into the BXT's top where it clicks firmly into place for bombproof coupling. Connect a few cables and that's all she wrote. The monitor's DSP recognizes the add-on module to load new filter software. Presto, an altogether new loudspeaker. Instead of a 3-way with tweeter, mid and a quad of woofers, the number of the latter now is a solid dozen. As already hinted at, this extra artillery isn't primitively added like a basic subwoofer. It expands the vertical cardioid dispersion. This combines kidney-shaped with cylindrical radiation, the latter as a line-source function. This adds reduced floor bounce. Backed by high power exploited by DSP wave shaping, Kii's heart/kidney pattern now holds together down to 50Hz. Also, spreading bass burdens over thrice the cone surface reduces distortion. What the 3/BXT is not is a narrow speaker which acoustically behaves like one. That would have sound detach from the baffle from 600-700Hz. But here we have no typical directional to more-or-less omni transition. What's more, the cylindrical aspect of the wave propagation encounters less loss over distance; and where speakers which expand to full-space 360° dispersion below 700Hz cause 50-70% reflective sound, the BXT system reduces this to 10-20%. More direct sound minimizes the influence of room acoustics. Below 200Hz, conventional speakers behave as pure omnis. This triggers reflections from at least four walls, the ceiling, floor and all hard furnishings. Hello time delay and comb-filter effects. Not so with the Kii 3/BXT combo. But there's also less excursion-related distortion because so much more cone surface works a lot less hard. That's true even for the internal bass amps of the head unit whose redistributed load is now lighter. Finally more air motion in the low frequencies resets the system's -3dB spec to 20Hz where the Kii Three solo is already down 6dB. All this conjures up unassailable authority and stability. The latter is even true physically via a massive X-shaped steel plinth which lowers the center of gravity of the combined 120cm height.