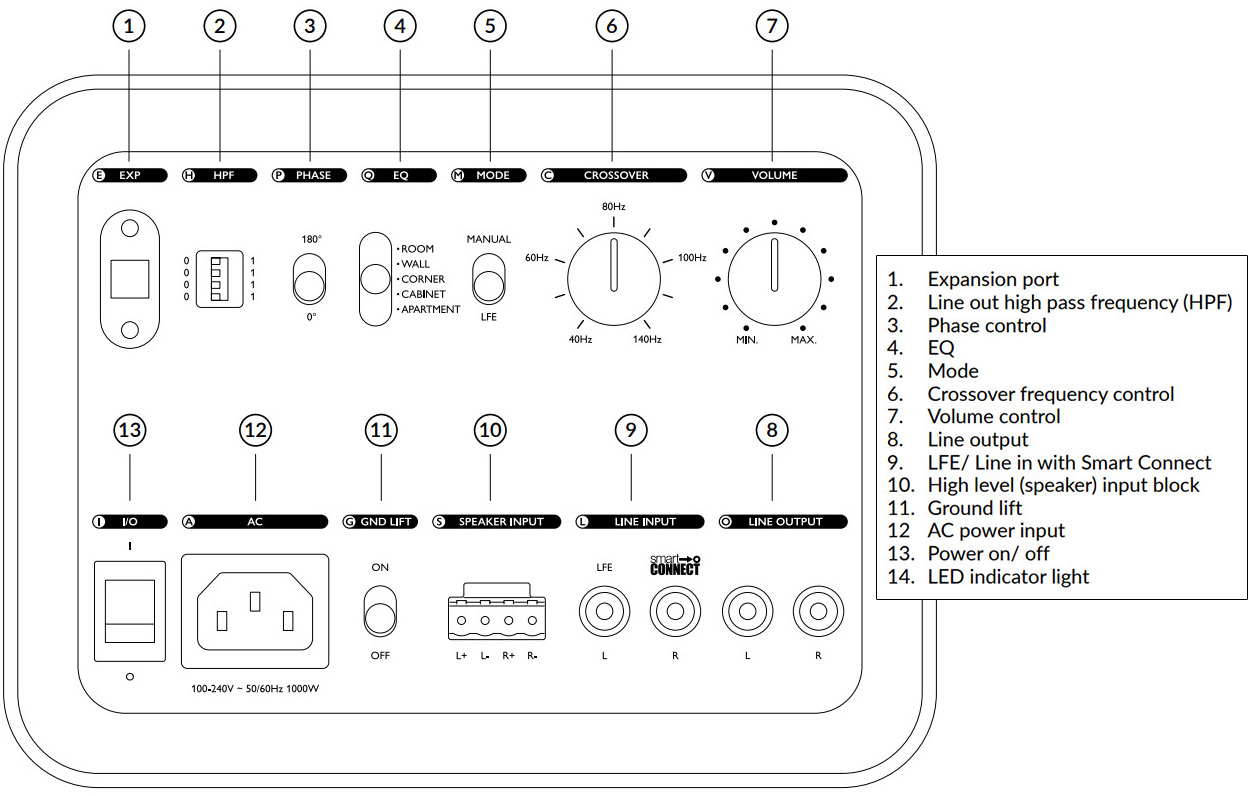 The graphic below shows how to hook up two subwoofers from either a pre/pro's LFE output or a preamp or integrated's pre-out. At left we see the dip-switch options for the high pass. That determines at which frequency the main speakers blend out. Trying to produce bass that's beyond them still taxes their mid/woofer or woofer by raising its voice coil's temperature. In an inverse square function, rising heat drives up impedance/resistance which chokes dynamic range higher up.

Relieving a main speaker of the lowest bass thus can benefit its sound quality. That's particularly true for smaller bandwidth-limited monitors. The obvious prerequisite for unblemished success is a top-quality preceding high-pass filter.

KEF's next-size-up subwoofer model is the KF92. That scales up to dual 9" woofers and a cabinet that's 63% bigger. Yet the only thing that going bigger buys us are 5dB more max SPL. 1000Wrms amplification and -3dB @ 11Hz carry over from the mini. Recommended room sizes are 5-50m² for it, twice that for the bigger unit.

The built-in DSP engine exploits the surfeit of available power and long-stroke origami suspension to optimize intelligent bass extension which counters expectations re: size, loudness and reach. That's coupled to a rev limiter to protect the device. 'Apartment mode' is mindful of LF bleed through walls which could annoy the neighbors. When selected, it attenuates the very low frequencies.

The basic force-cancelling topology minimizes the severity of physical vibrations driven into the enclosure whose sealed aluminium build anticipates very serious internal pressurization. In the olden days, Bob Carver's diminutive Sunfire subwoofers were notorious for going walkabout. We sold them at the Bay Area store I worked in at the time. I distinctly remember their silly propensity for not staying put because of the asymmetrical forces at work. They also suffered high distortion as value-subtracted tax for counter-intuitive power from a small enclosure.

Fast forward the clock of DSP to 202. Locate it inside an engineering-driven company like KEF. Digital signal processing. Motion feedback. Overdrive limiter. Custom drivers with specialty suspensions. The sum of these ingredients promises significant progress from then to now.

It consists of a transmitter and receiver for wireless 5GHz transmission without compression and low 17ms latency for home-cinema lip sync and proper music timing. Such bass data transmit at 24-bit/48kHz. Wireless reach specifies as 15-30 meters. The transmitter powers directly via USB,  the receiver from the KC62's expansion port.

If you have ground-loop gremlins careful routing and proper power delivery can't exorcize, there's even a ground-lift switch.

Based on the evidence of raw specs and photos, the li'l very handsome KEF KC62 cube promises performance we've never yet heard from a sub this compact. Lock-down and bitter Brexit as the mothers of invention? If so, hello baby!