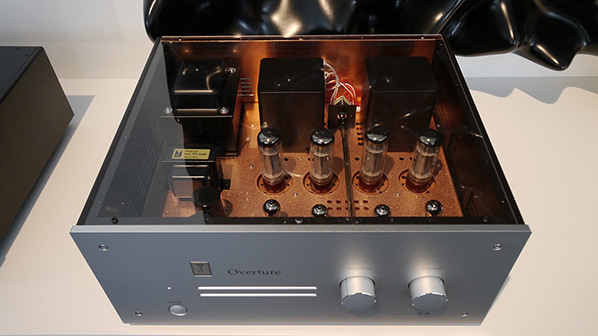 When I caught up with Kaiser at Munich, Rainer explained how Mini's flat and high impedance was a result of working with Kondo's EL34 Overture during R&D. Internal Mini wiring plus wiring for its ribbon transformer's primary is Kondo's famous proprietary silver. It's made available here to an outside firm for the very first time in 40 years. Another pre-show email from Rainer was signed Director of NVH, Continental Automotive GmbH. It came with a PDF article showcasing his work at Powertrain-BU Engine Systems. The header read "a man who literally hears quality. When it comes to the solving of acoustical problems, the principal expert for NVH is in demand across the continent".

It sketches out the backdrop against which Rainer develops Kaiser speakers: industrial well-funded measurement-centric research on how to lower automotive cabin and other noise. NVH is short for noise, vibration and harshness.

That very neatly condenses focus and purpose into three short words. It explains Rainer's unique expertise and approach to enclosure design. He looks at it like a car cabin that's exposed to all manner of undesirable noise from its own engine and tyres; and how to reduce it. The result is that we hear less of the box, more of the music. That's especially germane with smaller speakers of full-range ambitions. The louder we play them with bassy music, the more they pressurize internally to escalate stress on the box, its drivers and also the filter components – unless those seal into a sub chamber. More on passive radiators or ABR. "They cost a lot more than a cabinet hole with an attached tube of course. By using four, the Furioso Mini's raw parts cost already eclipses equivalent ports by a factor of ten. That still reflects a lot higher in the final price.

"Also, a port not only works at its tuning frequency but as a kind of organ pipe with two open ends. So it exhibits a lambda/4 resonance often clearly audible in the midrange. A passive radiator does not. It does however create a useful additional null in the transfer function below the cabinet tuning. That causes less energy in a band where the room already acts a bit as a compression chamber. In the bass, you're perfectly correct thinking that one would add the cone surface of the radiator/s to that of the active mid/woofer. For the Furioso Mini, this sums to around 500cm², more than a 12-inch woofer. Due to this large surface, acoustic coupling to the air is far superior to a small port. It's why an ABR usually enjoys more linear high-volume behaviour. To match a port's dynamic output to that of a radiator, you'd need big port area/volume. Then high SPL nonlinearities stop being an issue. Think of the old Onken enclosures. They used 90% port vs. cone area. Also, an ABR is very easily tuned to a customer's room." Here we remember that a passive radiator's functional principle is mass. Increasing or decreasing it by changing variable weights on the cone alters its tuning. 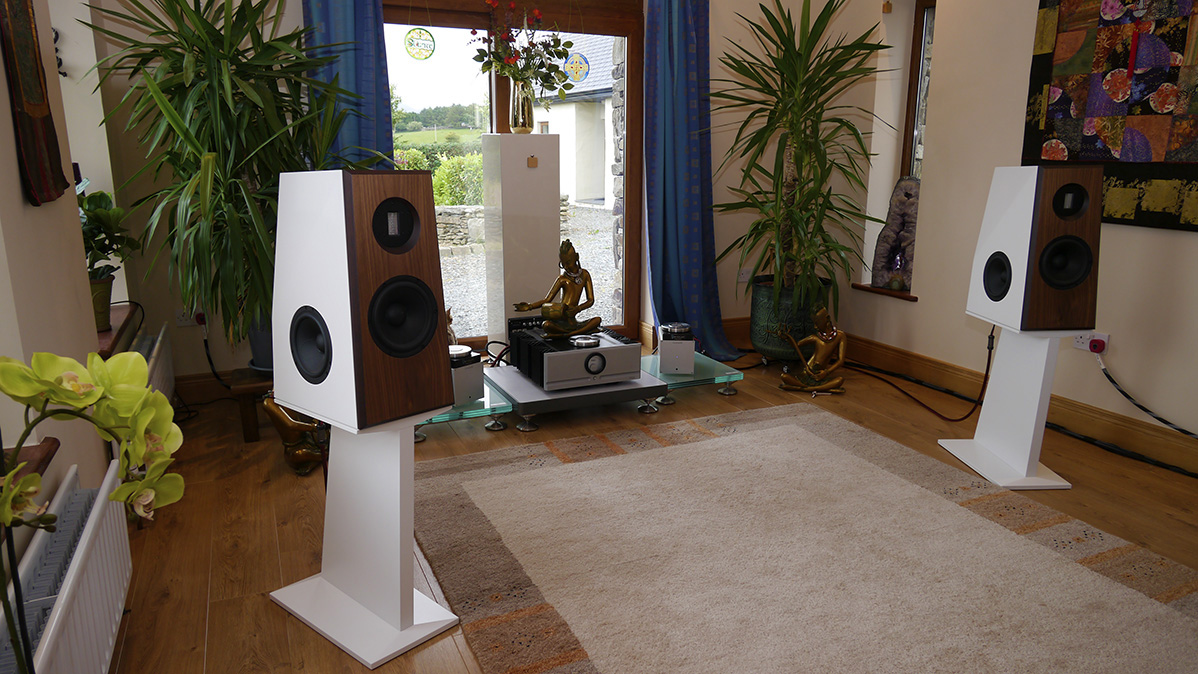 The recalled pair out to pasture. But against the next image, it again shows the v2/v3 changes.

By September 20th, "for your eyes only" appeared in my in-box. It had this terse message accompanied by a photo: "Test cabinets. Will send pix with mounted drivers this weekend. Looks rattenscharf. The new Mini." I'd not heard that German colloquialism in ages. Literally 'hot as a rat', it actually derives from Rattenschaf or 'rat sheep'. Due to favourable climatic conditions, sheep on the Falkland islands exhibit unusually frisky behaviour. Like rats, they copulate unseasonally to give birth thrice a year. Clearly Rainer thought the Mini an unusually turned-on box. Shown here in his workshop next to a Chiara, I had to agree. These cosmetics were much improved. 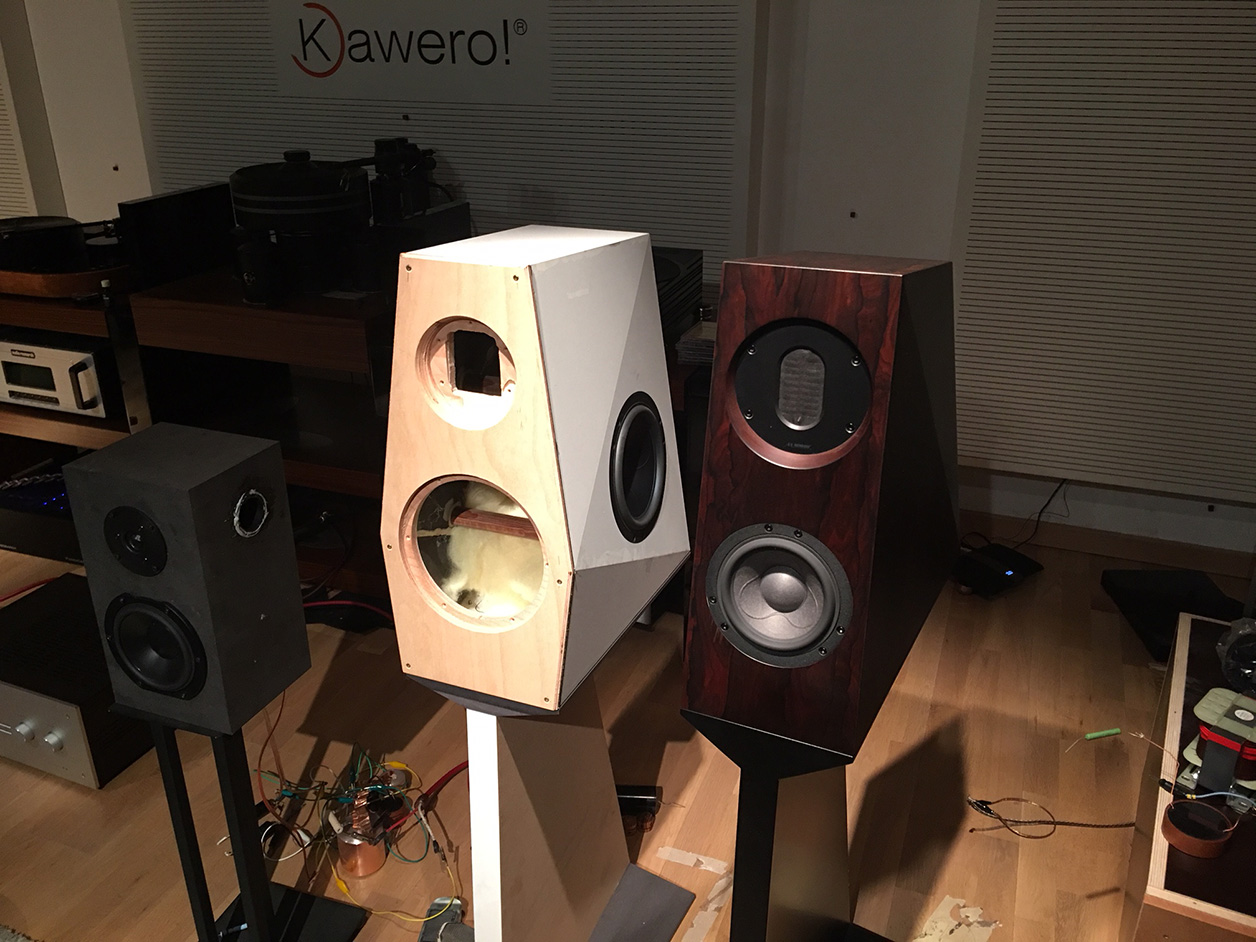 By September 26th, "I am testing Silvercore autoformers to attenuate the ribbon. Sounds very good. But expensive."

Rainer was leaving no stone unturned.

By October 6th, "making big progress. Went away from the Silvercores. Above 5kHz, they had less harmonic distortion than a resistive solution. However, despite high-passing the autoformer with just 1.1µF, I encountered high distortion below 1kHz. That probably was core saturation. A resistive solution performed much better and was x 30 cheaper. I still tested expensive Duelund cast copper capacitors but in this application, the less costly red Jantzen Superior Z caps were better. Next week I’ll get the final tankwood baffle. My prototype cabinet wasn't the very best. The actual enclosure will still improve bass and clarity. But already with the proto cab, the Mini outclassed Chiara." Talk about fratricide carefully engineered by the pater familias. Shakespeare would have been proud.

But Rainer wasn't done yet. On October 12th, the terse message was "ScanSpeak Ellipticor eats Viawave ribbon. HJ is changing the cabinet to fit new tweeter. "HJ was obviously Hans Jürgen Kaiser. And the ScanSpeak was a premium Danish silk-dome tweeter. That had swallowed a Russian ribbon for breakfast. When I told Rainer how interesting it was that originally, the Mini had adopted the Viawave as an improvement over the ScanSpeak Beryllium dome of the first Furioso Grande, "yes, funny, isn't? I was always a big fan of ribbons and I like their non-homogeneous radiation with less energy aimed at ceiling and floor. And I like natural tone colors. Ellipticor delivers. With regard to radiation, it is better also than a spherical dome. Do you remember the old Audax elliptical tweeter from 30 years ago, a piezo with a gold surface?"

I did. Pat McGinty whom I'd worked for used it in his Meadowlark Heron model. Furioso Mini was taking final form. What other upgrades lay in store before the book on it would close? As Rainer put it to a questioner on FaceBook, "Chiara is very good and has complete tankwood cabinets. This is an advantage. And Duelund parts. But Furioso Mini has incredible tone. As advertised in the ScanSpeak spec sheet , "true to life"." 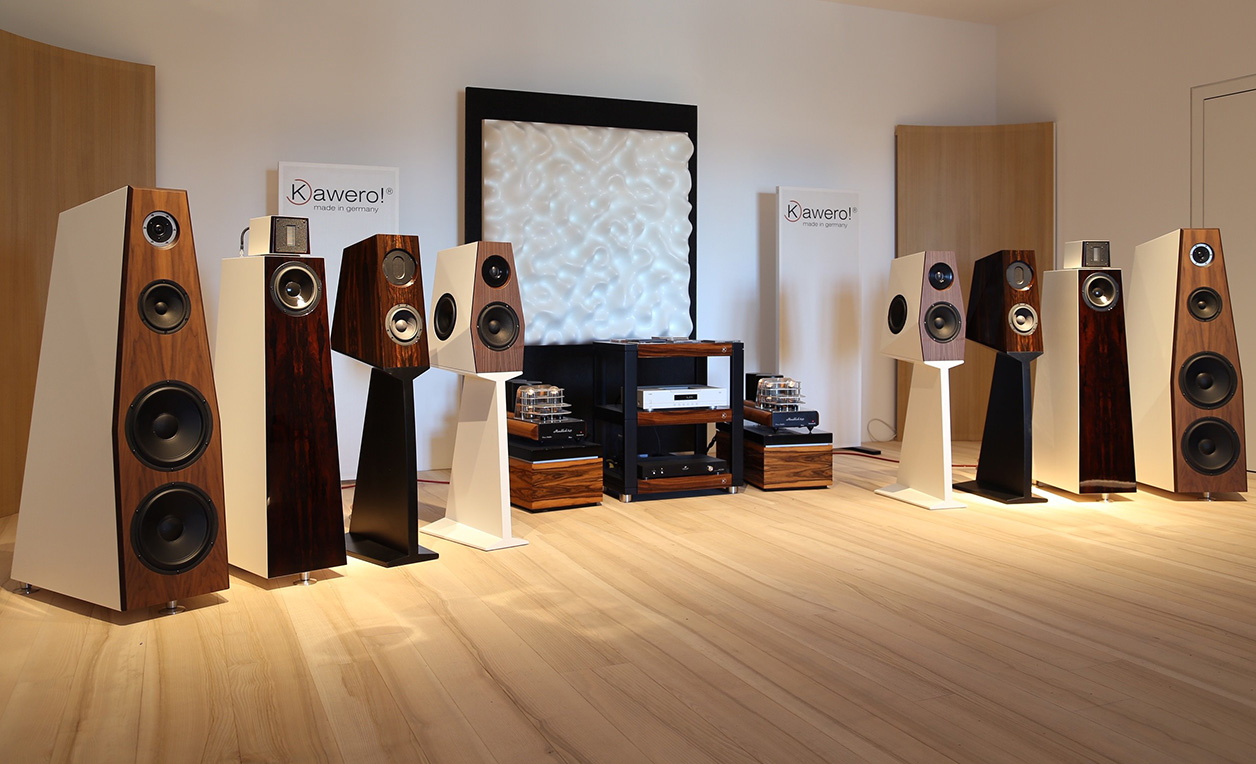 On December 6th, the email's subject header read "good and bad news". Seeing the sender, I knew the bad part wouldn't be life-threatening. "We had this November dealer show with Furioso Mini in Toulouse. Perhaps you've followed our FaceBook posts. However, the speaker is so good that we sold it to a visitor. In other words, it won't come back to us. Hans-Jürgen is making a new batch ASAP. Sorry for the delay."