Parallax? A standard aluminium dome tweeter will exhibit its first breakup mode at 23kHz. Magnesium seems good for 35kHz, diamond for ~70kHz. If you're a 55-year old male whose upper threshold is down to 15kHz, none of it matters a whisker. You'd think. Yet you still perceive the diamond tweeter followed by beryllium as being smoother, sweeter and airier. This indicates how out-of-range distortion can and will modulate the signal we do hear well below it. From that a generalized conclusion has it that the farther distortion is pushed beyond our scope of human hearing, the less it will interact with it. Zena's bandwidth is so far beyond the most extended of tweeters that one could question its validity. Isn't it the analog version of digital's ever-escalating upsampling craze? Today's Denafrips DACs will do 1'536kHz PCM and DSD1'024 yet 99.99% of all my recordings remain 44.1kHz Redbook. I don't own a single 705.6kHz album or file, much less one at this latest supported 1'411.2kHz.

Still, compare a transformer-coupled valve amp that's -3dB at 30kHz to a class A amp good for 200kHz to our class A/B LinnenberG monos. By contrast, the valve amp sounds dark, slow, warm, fuzzy and imprecise. The class A amp still acts demonstrably warmer, thicker and more opaque than the finalists. Cited as probable cause for greater clarity are less/no phase shift and faster/steeper rise times as bandwidth increases. Where the practical limits for this kick in is for the actual audio engineers to dispute and argue. All I will say is that having previously reviewed Gryphon's two Diablo integrated amplifiers plus their Kalliope converter and two speaker models, I never had an opportunity to precede our 1MHz power amps with equivalent solid-state preamps. Until now. Extending our super-fast highway of mega bandwidth all the way across the audible waters as it were… that clearly didn't go unnoticed. Though true cause could still hide elsewhere, I think it more likely that it doesn't. If so, to get the fullest benefit of this key aspect of Zena's circuitry could very well imply wanting to use an equivalent amplifier from Goldmund, Gryphon, LinnenberG, Spectral & Co. 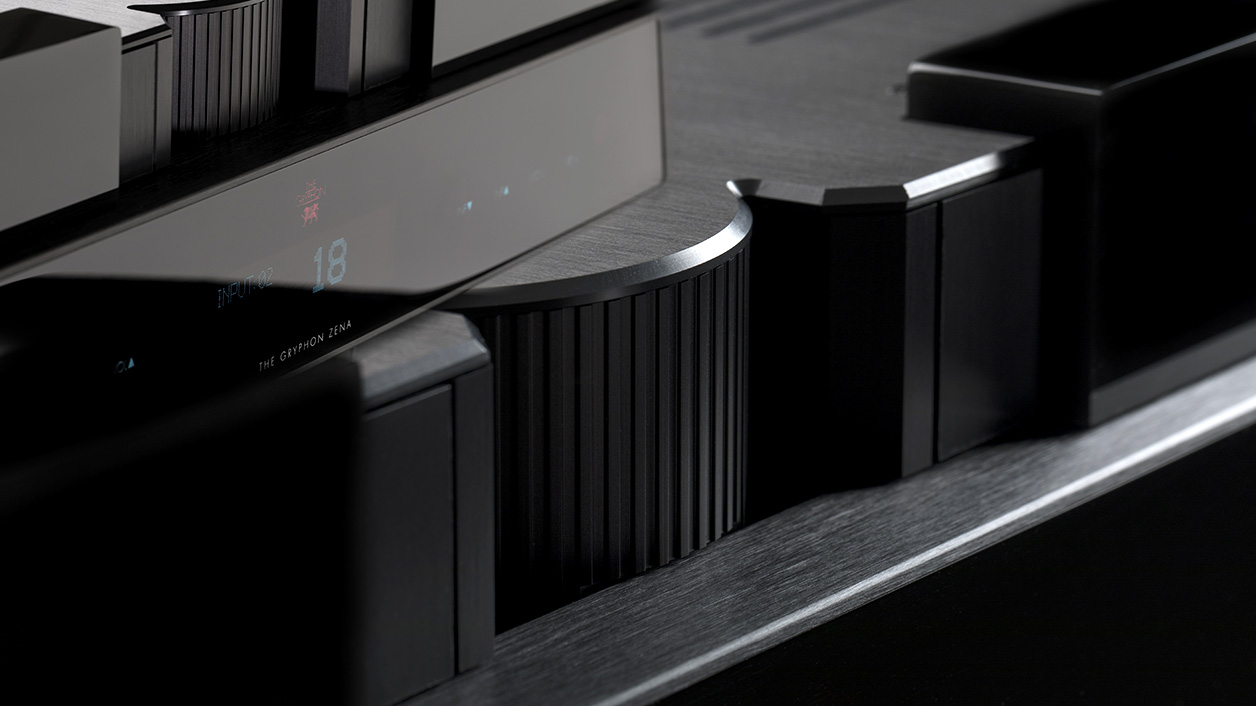 To compare preamps, Zena used her unfair advantage—why have one if not for crass capitalist exploitation—by running USB direct. To confirm that sample-rate warriors would be blissful, Audirvana 3 performed maximum power-of-two oversampling on a rare 24/96 file. Voilà, 384.0kHz acceptance confirmed on Zena's ultra-reflective display. Wyred4Sound's and Nagra's preamps were preceded by the Denafrips DAC which passed on the same USBits by analog XLR. After all, prior DACing had determined virtually stand-in performance for the hulking Chinese converter.

Override. Syndicated. As though all good things came in pairs, Zena's domination on the same qualities of radiation intensity for higher sound-to-silence friction and energy transmission plus superior harmonic density continued. On that score, Zena was the master thief who disappeared into the night with the most loot. On all the usual suspects like soundstage width/breath, even-tempered tonal balance and the lot, across a variety of music, this became a meet of equals. But those who equate tubes with automatic superiority in the game of fine harmonic retrieval, brought up from the murkier depths to the gleaming surface, would have been disappointed. In that discipline, the all-transistor Zena bested the small Swiss triodes for very similar coin. This also implied a higher degree of presence. To compete in Zena's league with glowing glass requires Vinnie Rossi's L2 DHT linestage with its 900kHz bandwidth, the three no's of output magnetics, coupling caps and driver tubes and big power triodes, not 12A.7 types. It'd also mean $20'490 with DAC for the American, so a bit north of the €17'600 for the Dane with DAC and far beyond the $3'495 for Wyred4Sound's current best without a DAC. 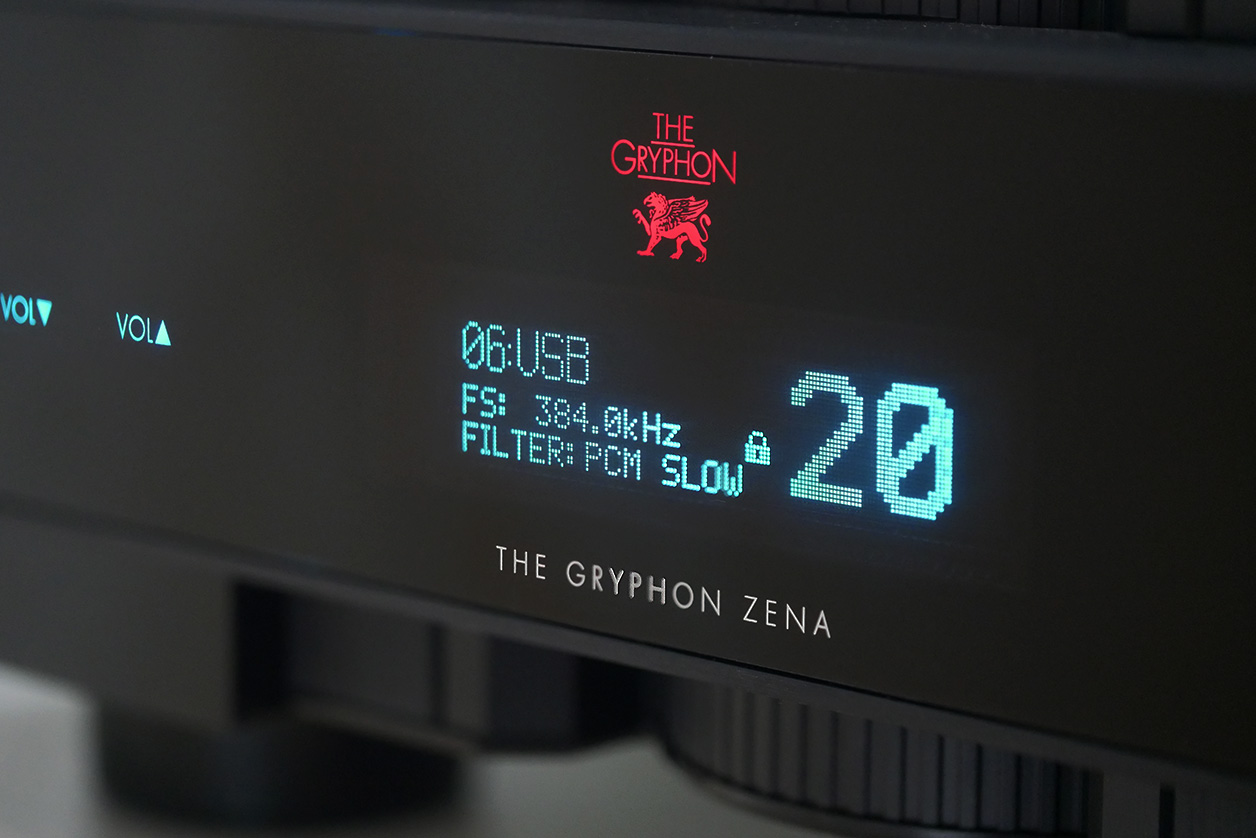 Did I detect anything beyond Zena's grasp? Aside from her exclusively black dress code, only that changed inputs didn't remember their last volume setting. If that memory function could be added with a future firmware flash, it'd be a boon for multi-source users who switch a lot. In my book, the DAC module is a no-brainer despite unavoidable perception of reduced ROI. If it's sonic excellence which you seek, I doubt the same outlay could elsewhere get you anything more other than a second big enclosure with its need for another power cord, another shelf and a set of analog interconnects.

As Gryphon have proven previously with their very well-received Diablo 300 and Diablo 120 amplifiers, integration at this level really is the smartest way to go.

Zena + DAC. So is it really the feminine form of zenith after all? After my time with this Viking princess, I'd say "very much so".