Downstairs. If there were a wall behind the listening chair, this would be another 4x6m space, here simply with vaulted ceiling and many Franck Tchang acoustic resonators. But without such a wall, it continues into an adjoining kitchen/dining and living room which are merely separated by a half wall of stone-clad fire place open to both sides. This makes for a total of ~100m², hence significantly more cubic air volume for the transducers and wide open space behind the listening seat. This hifi starts with an .aiff music library on the iMac's 3TB Fusion Drive. Tunes then get imported to 32GB RAM to spin down the drive and are piped out over double-header USB cable through the Audirvana 3 media player to a Soundaware D300Ref reclocker. That forwards them as digital I²S over HDMI to a Denafrip Terminator discrete R2R DAC with v6 DSP board. Now converted to analog, the signal hits a Vinnie Rossi L2 Signature Preamp—at this juncture with its stock ElectroHarmonix Gold 300B whilst KR and Elrog alternates remained en route—then a pair of fully balanced LinnenberG Liszt monos. All AC/DC filtering is via Spanish Vibex conditioners. Because here the floor was too uneven, I used the provided spikes plus spike shoes from Track Audio to protect the parquet. If that higher floor gap changed the intended radiation resistance, I didn't notice any bloomier bass.

In the mood for some quality Baku music, I cued up Sevda Alekperzade whose "Getme Getme" combines piano, cello and duduk with a Jazz-trained voice and good production values. Right off, the Italian boxes had zero issue filling the space. Sitting in the exact spots vacated by our usual Audio Physic Codex 4-ways, they didn't ride their room mode to avoid two associated very narrow bass peaks. Whilst obviously giving up 10-15 cycles of reach and some raw bass power which some Mercan Dede ambient would show later, losing that room interaction felt like a fair trade. When Sevda flips into her head voice at 3:34 and again a minute later, the A-6 Evo avoided going lean and hollow. That reiterated what would become a leitmotiv – of two small paralleled midranges behaving more substantial.

With Sevda having represented her country's female contingent, a light Azeri tenor had to follow. Deciding between Ilqar Muradov, Elgün Hüseynov, Eyyub Yaqubouf, Yaqub Zoroofchi, Agagadas Agayev and Azaz Shabanov, I went with Eyyub's bouncy "Yixilir dünya" also for its slinky clarinet played mostly in its low register. Its tonality felt spot on as did the real not synthesized strings. Most centrally, the system celebrated the richly hued tenor voice with proper gravitas of chest and diaphragm, not just throat.

… and return to Gold Note's home country, Venice in particular. For Baroque violins after some very potent hormone treatments, I had Vivaldi's Concerto for 2 violins in A minor transcribed for… very big violins compliments of Luka Šulic and Stjepan Hauser who record together for Sony Classical under the 2Cellos brand. This cut relies on very robust tone, clean timing and the ability to convey the heavily sawing bow action without getting obnoxiously aggressive and unduly wiry and strident.

Listening to this over the ribbon headphones at higher SPL can get just a bit trying. The Gold Note towers in their fetching Walnut outers toed that line, again. Modernized Vivaldi sounded appropriately energetic but not raucous. 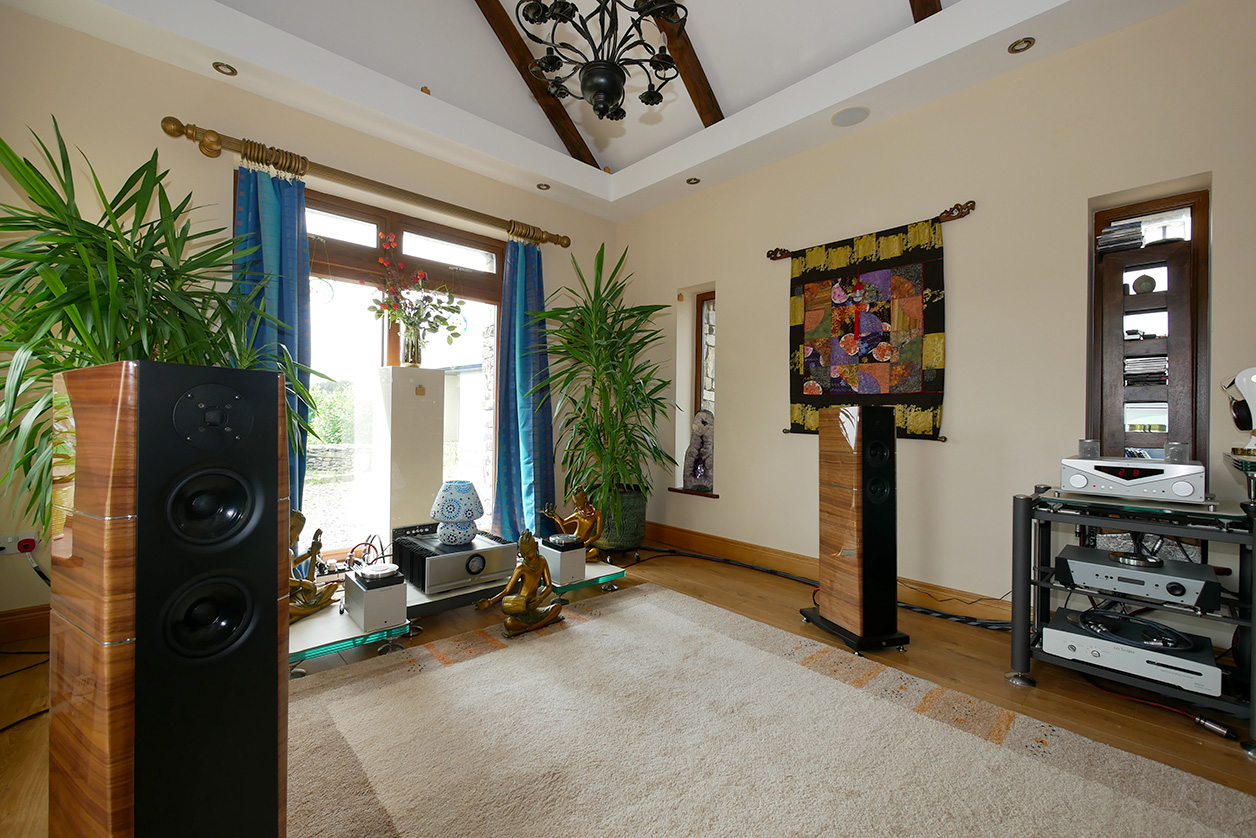 To conclude with a twilight variation on the recurring theme, I indulged some Abed Azrié from his Lapis Lazuli album with this "Wandering" track. Darkly hued, fabulously moody, a bit mystical in fact, this music lives on the gravelly French/Syrian's vocals which, like Leonard Cohen, ought to go under your skin, not stop short. They didn't but found their mark. Which, in a roundabout way through a few examples, arrives us at what I viewed—actually, heard—as the core attraction of the A-6 Evo.

This speaker is very cannily voiced to celebrate a properly weighty nicely saturated midrange. Treble and bass bracket with unexpected extension but the headline act or focus is really the vocal band. Where many 2-way monitors of equivalent dimensions minus the lower half will prioritize detail and speed, the Gold Note A-6 Evo uses its greater cubic volume and hidden woofer to move deeper into the tone/body polarity. With a cleverly tweaked dual-port system, it finishes off being unusually desensitized to placement which means well below-average room interaction in the bass. As promised by its design brief, the A-6 Evo delivers. It's ideally suited for medium-size rooms where nothing bigger is necessary or even welcome. It's lovely when a concept is so clear about what it wants, then so clear about giving us just that, exactly. Being rather handsome to boot then comes as a bonus…