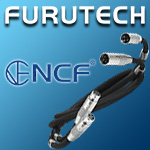 Alphabet soup translator. NCF RCA. The first three letters abbreviate Nano Crystal Formula. It's what in its 2nd gen Furutech employ in select products like upscale power plugs and distributors. Its primary function is that of noise trap. Other companies like Akiko, Shunyata and Verictum have their own formulae so the principle is well understood. NCF's secondary function is as "generator of negative ions to eliminate static". Not leaving good enough alone, Furutech then add nano-sized ceramic particles and carbon powder for damping in the piezoelectric realm. Translating RCA has more options. It can be London's Royal College of Art. Until 1969, it also was the Radio Corporation of America. It's since become shorthand for a hifi plug which the same RCA Corp invented in the 1930s. So it's a very old piece of legacy tech which is still with us. Now we've hit pay dirt. Furutech gave the ancient connector a rethink. They introduced their first-ever RCA plug with NCF, the CF-102 NCF. It's said to offer "a dramatic reduction in noise, improved imaging, focus and soundstaging." In this $210/pr plug the tube pin is of a one-piece construction formed of rhodium-plated OCC injected with NCF. The connector housing is a multi-layer affair "in which a hybrid of NCF and 3K silver/carbon fibre layer onto non-magnetic stainless steel. A special set screw ensures firm contact between connector and conductor. The solid-core Alpha-treated OCC conductor encases in double-layer shielding, a high-grade polyethylene dielectric and a composite sheath with resonance damping nano ceramic and carbon powder." 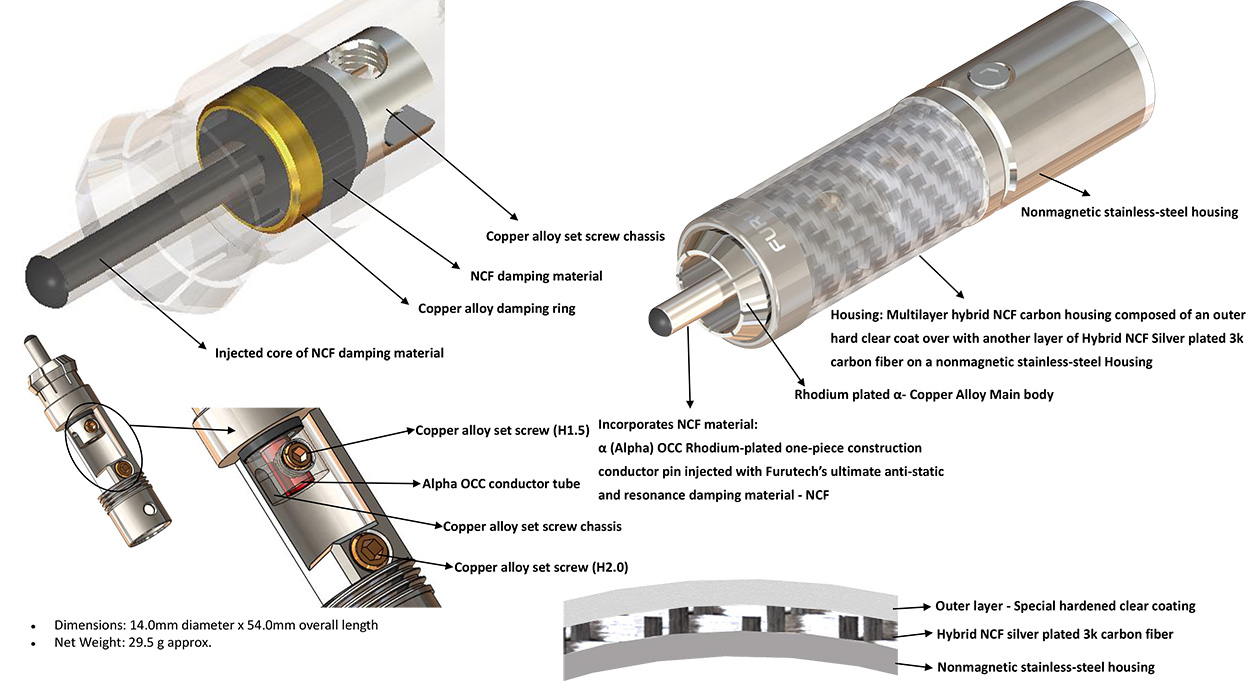 Having reviewed numerous NCF-enhanced power cables, distributors, cable lifts and plug-in noise traps which I now use in two systems, I've been a firm N-liever. That had me wonder when this clearly effective material would show up in low-level signal conduction. That time is now. With Furutech's vast parts catalogue, there's something for everyone including DIYers wanting to roll with this plug. Furutech's first interconnect with it is the Lineflux NCF. It launches 8 years after the original Lineflux without NCF hit the market. Cable Ø remains 13mm, standard length 1.2m. In Furutech's own words, "NCF delivers improvements in soundstage depth and  focus, harmonic retrieval and tonal balance." In my words, NCF's inclusion lowers the noise floor. Planktonic data otherwise caught up in it rise to the surface of audibility. At least that's the promise I read into it. With my prior NCF exposure, I didn't think it was empty. To be sure, I signed up. Was I betting on a plankton-filtering whale or small-time tinhorn?

In the upscale audiophile cable sector, the bling of massive plugs, heavyweight dampers and overkill girth plays to a bigger-is-better audience. Whilst Furutech's first NCF RCA plug is finished to a 't' to risk being lumped into the same drawer, it's got real engineering and material science in its corner. Likewise for Furutech's first NCF interconnect. It's modestly dressed, of standard girth and doesn't sling exotic geometries or rare metals, just quality solid-core copper and uncompromised mechanics. It shows a conservative detail-obsessed Japanese mentality. But perfectionism means a product that, though destined to hide behind components, is built to pride-of-ownership standards. That goes upscale but stops shy of being silly. Common sense says that we want components/speakers of high resolution to drill down into the micro realm of noise reduction we can realistically expect from such NanoCrystal² Formula applications. But common sense also says that cables make no difference. So perhaps common sense won't be quite enough to tackle this latest Furutech cable?

When R&D signed off on production, my contact Graeme Coley switched tacks. Instead of RCA as originally scheduled, he now proposed to send me the equivalent XLR cable. Its connectors carry the internal CF-601M and 602F designation for male/female respectively. The XLR plug of today dates back to the late 1940's and one James H. Cannon, founder of Cannon Electric of LA now part of ITT Corp. By 1950 the XLR had acquired today's locking latch. Original manufacture was in Japan and Australia. The latter plant sold to Alcatel in 1992 which Amphenol took over in 1998. Today ITT Cannon still make XLR plugs in Japan. Also, Switchcraft entered the production game as did Neutrik, Oyaide and Furutech.

4-pin XLR show up in intercom headsets, professional film/video cameras and LED microphones. XLR5 show up with digital lighting controls, XLR6 with dual-channel intercom and stage-lighting gear, XLR7 with certain tube condenser microphones as well as wired remotes of fog machines. In hifi, XLR are either of the 3-pin variety or, for balanced headphone drive over a single cable, 4 pin. Now we're ready to listen. 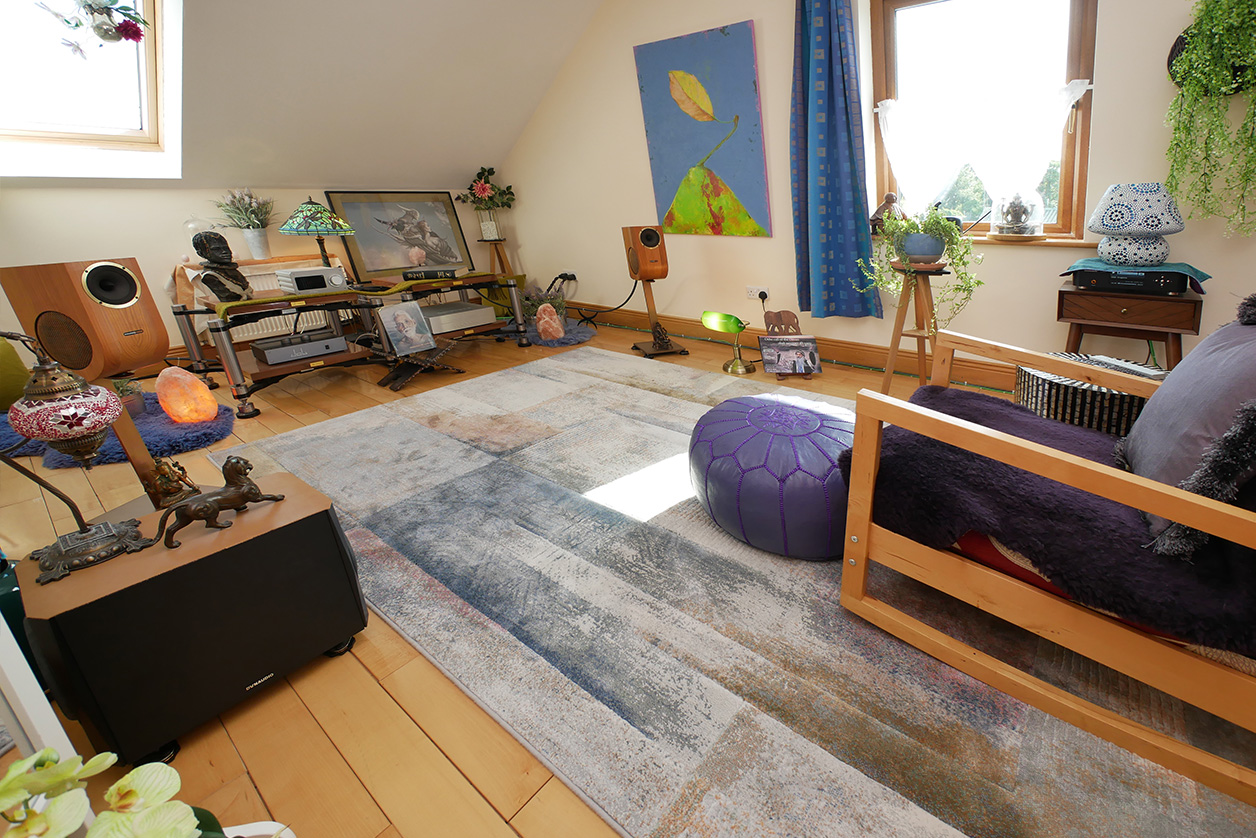 This upstairs system runs a suitably short XLR cable between Denafrips Terminator Plus—which reclocks the Soundaware D100Pro SD transport next to the seat which sends out digital data via I²S over RJ45—and a Passive Preamp icOn 4Pro SE. There the analog signal splits into a 40Hz/4th-order high and low pass. The former sees a Goldmund Job 225 amp fronting sound|kaos Vox3Awf monitors. The latter sees a Dynaudio S18 sub which sits closers to the chair to compensate for its 2.5ms latency. The usual analog interconnects here are 1st-gen twisted coaxial Crystal Cable. Whilst I prefer cable reviews which swap entire looms to maximize their impact and streamline conductor/geometry types, today reports on only swapping one cable pair. Would that be a recipe for not hearing much if any change? Of course Crystal Cable and Siltech are by now on their 9th-gen silver/gold conductor. My vintage specimens are hardly representative of their current best. Still, one rolls with what one has. I'm not in the habit of upgrading my cables every few years. This gig would thus be something of a personal check-up. What had more than 15 years in this sector wrought with a 2022 effort at a statement cable from an engineering-driven outfit?