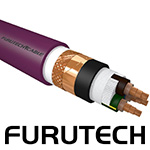 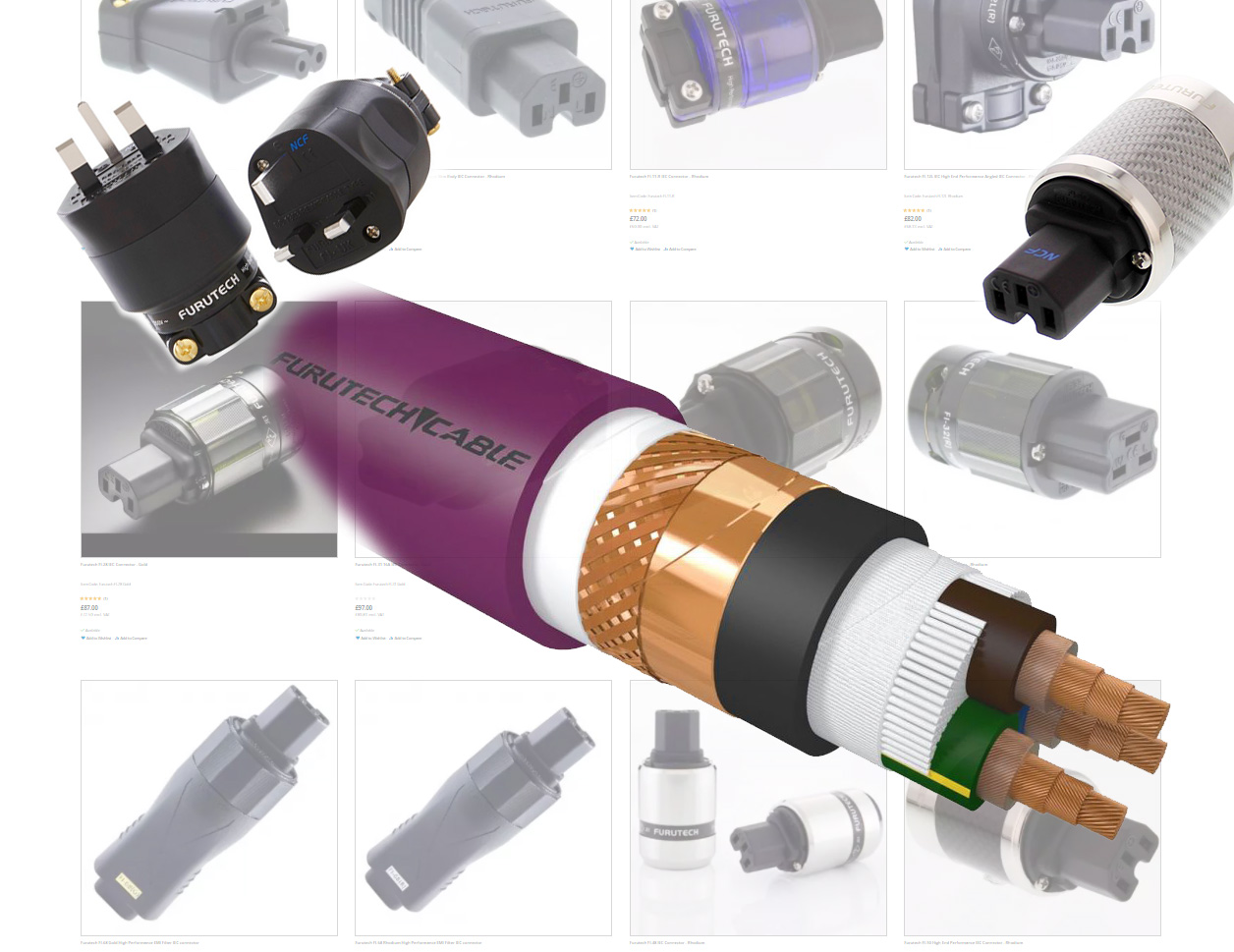 OCC-DUCC. In this alphabet stew floats Dia Ultra Crystallized Copper. It's from Mitsubishi Material Industries*, the world's foremost supplier for it. Their in-house and strictly quality-controlled process is different from the cast Ohno process but still creates an "optimally aligned long-grain molecular structure" for their oxygen-free copper. To it Furutech add their multi-stage cryogenic + demagnetizing Alpha process. Voilà, power cord OCD up the duct. If you live in the UK/Ireland and desire Furutech's very best, add the above FI-1363 NCF rhodium mains plug. It includes Nano Crystal² Formula, their piezo-electric crystalline compound mixed with ceramic particles and carbon powder which we've heard so much of in my recent Furutech reviews. To splurge, select the matching rhodium FI-50 NCF IEC connector. Hello high-current power cord with passive noise filtering built into either end. It's ideal to go between wall and power distributor. For à-la-carte assembly at your chosen length with your hand-picked plugs, visit the UK's Futureshop. They will also sell you the raw parts if your oujia board spells out DIY. Given the depth of Furutech's parts catalogue, that could quickly lead to PTSD to hit up more letters. Being made of lesser stuff, I let Furutech's Graeme Coley make those choices for me. I merely specified 3m of length and a UK mains plug. What would his team cook up for our upstairs system's primary power connection?

* "Conventionally, high-fidelity sound was pursued by increasing copper purity and crystal size in audio cables to avoid impurities in signal transmission. For the purpose of developing an ideal conductor for audio cables, we investigated the state of impurities in high-purity copper conductors and whether the conductors had any physical directionality. We found that the crystalline lattice does show a strong crystal orientation in the conductor's cross section. Moreover, we found that impurities believed to exist only at the boundaries of crystal grains also exist on the inside of crystal grains" [from Mitsubishi's internal review N°5]. The D.U.C.C.® process thus goes beyond attempts at creating 'mono-crystal' conductors and also minimizes directionality effects.

Mitsubishi Cable Industries have this table to show chemical inclusions found in CDA C10100 i.e. oxygen-free electronic aka OFE copper of 99.99% purity and 0.0005% oxygen content. For contrast, they show the values for their MOF®-6N8 copper [the unit of measurement is ppm]. Armchair warriors will endlessly debate their merits relative to audible performance. Showing this graph just suggests that not all 'oxygen-free' copper is created equal. Titan Audio of Ireland have availed themselves of a local university's tech department to conduct measurements which showed costly long-grain copper to have measurably better current conduction than ordinary copper. It thus shows up in their better power cords. Siltech and CrystalConnect also spend extra to source 'mono-crystal' copper and silver. Furutech are far from alone to think such materials superior for ultimate signal transmission. From the periodic table of elements, we see that in sequence, the listed inclusions below are manganese, phosphorous, sulfur, iron, nickel, zinc, arsenic, selenium, silver, cadmium, tin, antimony, tellurium, lead and bismuth. Our takeaway is that Furutech's OCC-DUCC conductor is mono-crystalline copper; very high-purity copper; undergoes multi-stage cryogenics; and adds demag treatments. Phew. If only I were an electron hit by current. Then I could tell you exactly how this makes life easier on me.

In the absence of that nano perspective, I must trust my ears. That's where strict objectivists bow out to return to their oscilloscopes. As in love, all is fair in hifi as long as we're having fun, be it in the seat or on the bench. If power cords bore you stiff, log off now. Today we're headed beyond generic freebie cords. Our tour guide are Furutech who began as an independent distributor of Furukawa Electric PCOCC products in 1988. Furukawa themselves started operations in 1884 with the opening of the Honjo copper smelting plant and Yamada Cable Works. Clearly these folks know more on the subject of copper and cables than average chop shops which dress off-the-spool wire from Mogami or Wanlung Neotech in fancy jackets and heat shrink.