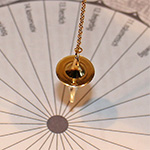 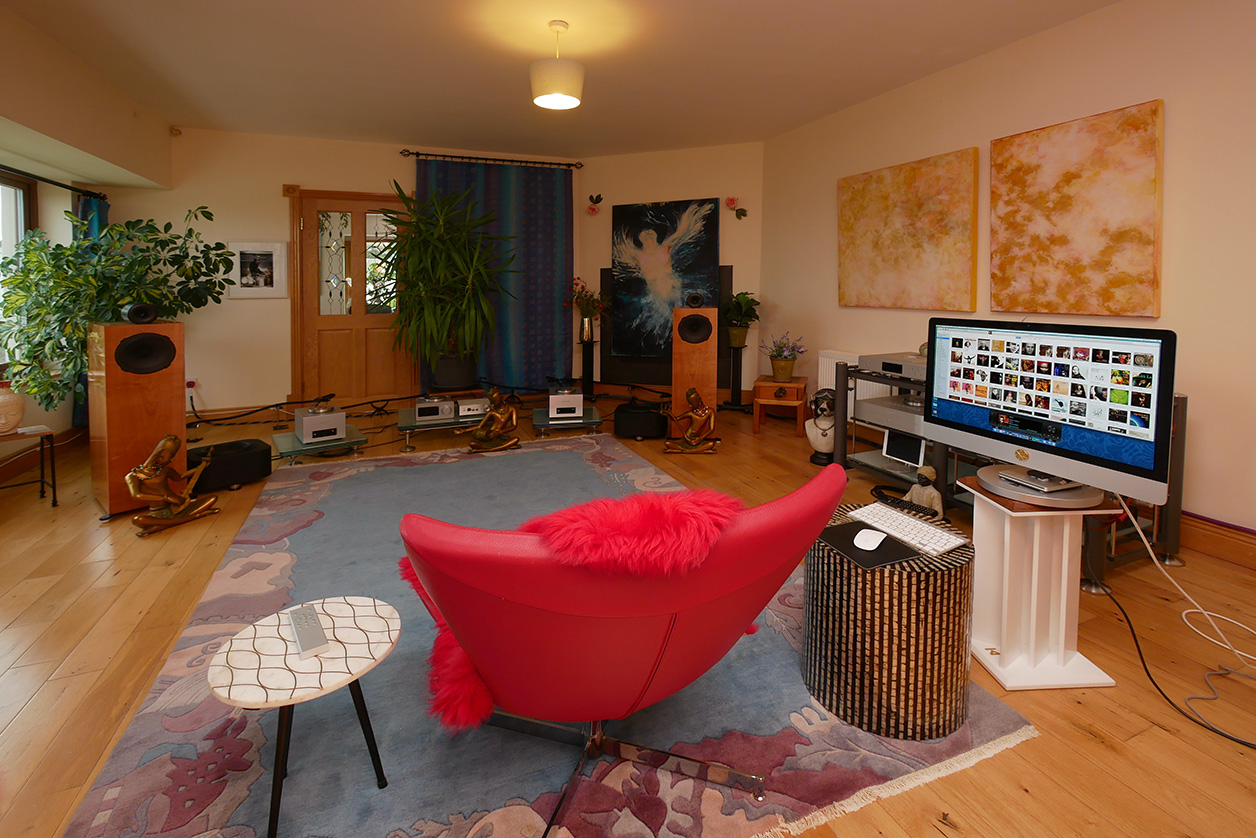 I've touched upon the new downstairs sound room already here. A week later, I'd chanced upon a favorite track, "Promenade" from ECM's Melos album with pianist Vassilis Tsabropolous, cellist Anja Lechner and percussionist U.T. Gandhi. The upper piano range sounded strangely glassy, the triangle strikes too white, the cello weirdly plastic. My balance erred on the side of speed, transients and most of all, too much high treble.

Sitting with the impression, I inquired into it. I instinctively felt that some damping was called for. A dense sub carpet beneath the Nepalese throw rug perhaps? Upstairs I've got more than 15kg of densely woven sheep's wool beneath the visible rug. Here instead I kept eyeing that bare front wall. What if I hung there one of our light-proof 240cm long blue curtains from Manor in Switzerland's Vevey? It'd cover a big area. The gap to the wall would set up a twin barrier for HF penetrating the fabric, reflecting off the wall behind it then hitting the same dense weave again. It'd naturally be utterly ineffective at lower frequencies. Those simply weren't the culprit for a change. My bipole horn tweeters' rear energy was. It needed taming. If the curtain didn't do the trick, it'd still work as a décor decision. Sleeping on the idea, I awoke with certainty. A quick trip to our local hardware store secured the necessary curtain rod. An hour later, I looked at a lot of royal blue. Coronation or abdication time? 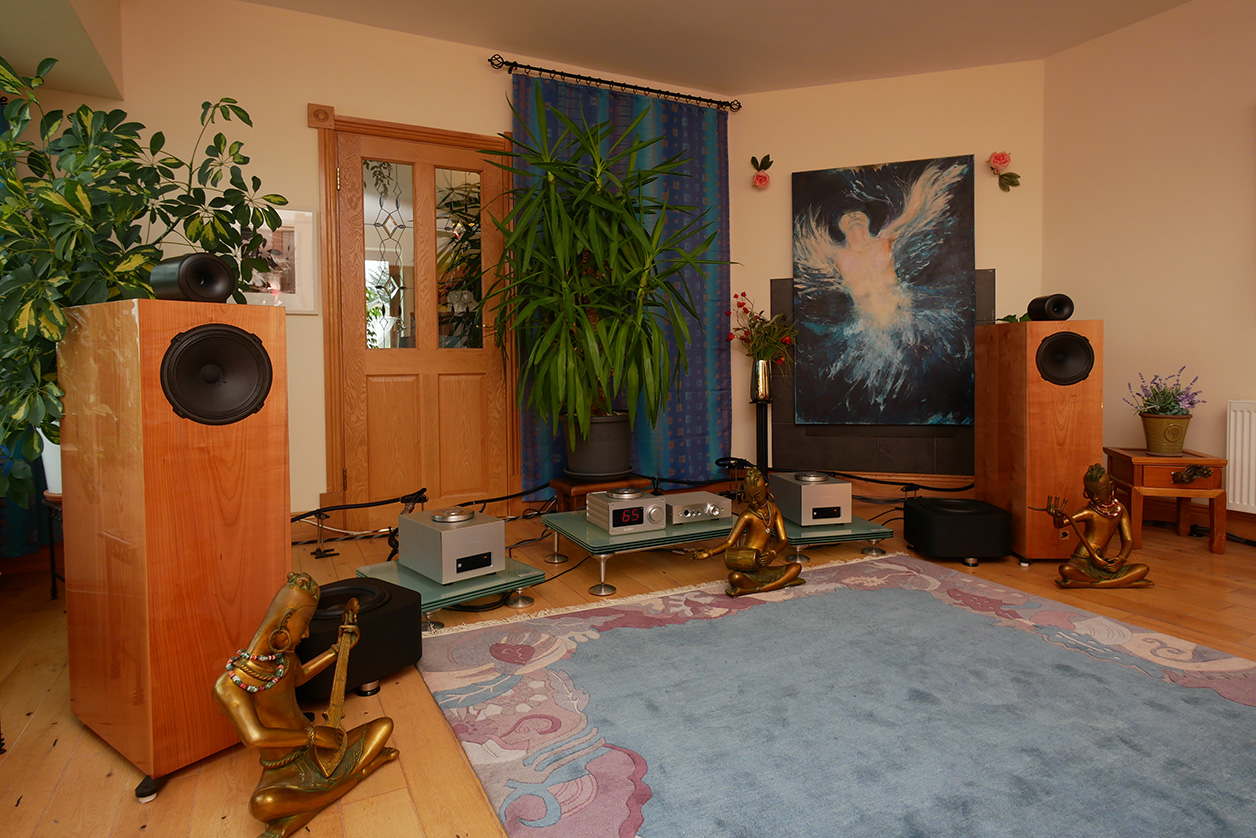 You may disagree but to me this looks better than recording-studio diffusors on the wall.

Cueing up the same track again, I had indeed chanced upon the needed shift. Old dog, old tricks. The piano's glassiness now was attractive radiance. The fiery triangle hits had regained proper lower treble weight, the cello its bel canto woodiness. At the end of this day, I drove with a full tank. I'd live with this new balance for a bit until another impromptu track selection might send up distress signals again.

It's easy to spout that a hifi should be genre/style agnostic and play whatever we cue up with equal aplomb. But techno and electronica differ wildly from string quartets, an operatic soprano creates different challenges than Mongolian throat singers and so does a close-mic'd slapped e-bass versus a farfield bowed 5-string upright. In reality then, any tune-up will swing our pendulum back and forth until we stabilize what we consider the middle. When all of our most important music sounds good to us, we're done. 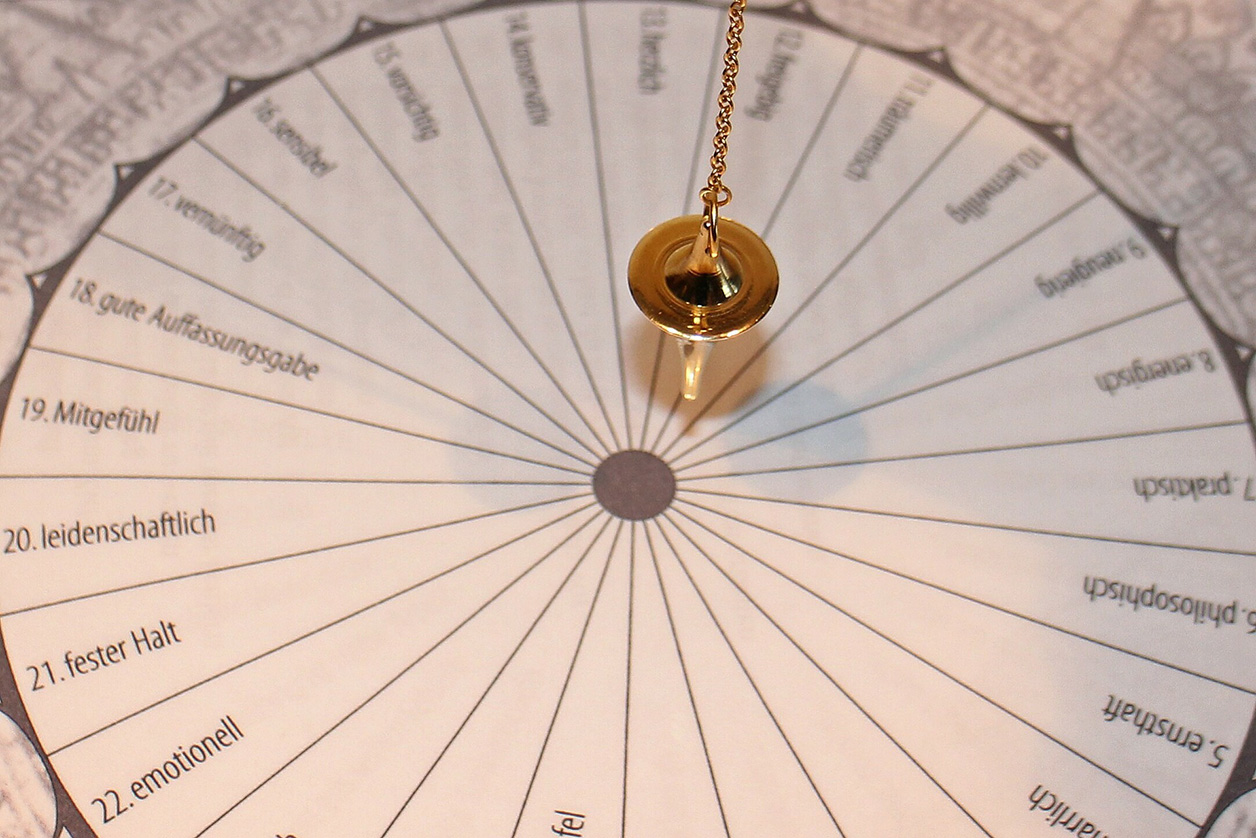 The middle is elusive but most of us recognize when we hit it. The question is, will it be right for all kinds of music, no exception? The more diverse our musical tastes, the harder this gets.

At times, putting up a floor-to-ceiling curtain where there's no window can do the trick. I'm curious what else this new space might prompt me to do. In my prior article on this space, I already mentioned that I leave the door open behind the listening chair to vent into the big hallway and my office. It neatly avoids pressurizing this room in the bass. Time to let the latest change settle in. Would this course correction mandate a subsequent counter steer because I'd overshot somewhere else? 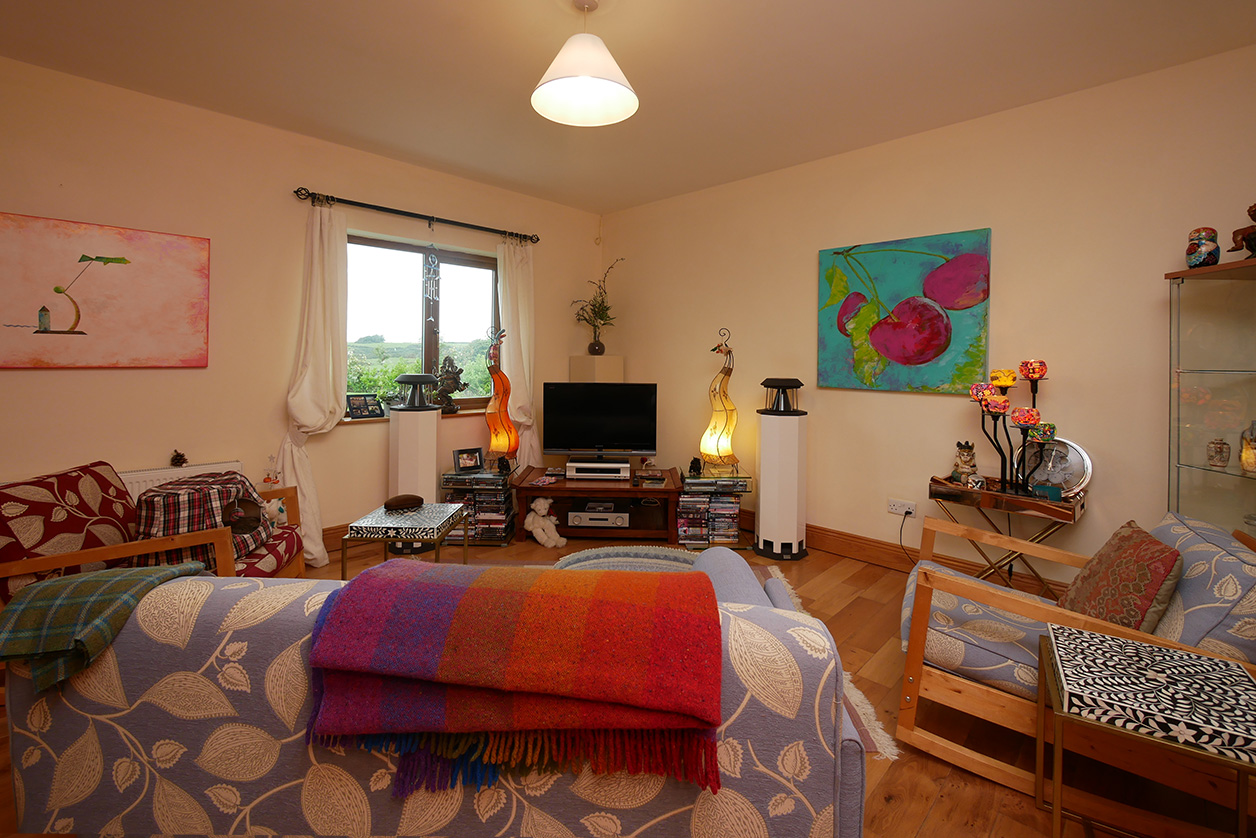 Sai Baba the lounge leopard's igloo on the red chair. Cats too like their creature comforts.

Incidentally, the diagonal setup doesn't just work under temporary show conditions for hotel rooms. It works swimmingly in our new 2.1 video system with Zu Submission sub in the corner behind the TV. Keeping it simple, the electronics here are an Oppo BDP-105 universal player and Simon Audio AIO. Speakers by German Physiks. "But they're so close to the wall!" That's by design. They're full-bandwidth omnis. The nearer we set their first reflections, the less time confusion we inject into the sound. My worst experience with upfiring omnis was under vaulted ceilings. Now extra-long reflective path lengths overstretched the room's decay times to get too blurry. The intended upshot is, should your square-ish room play hard to get for good sound, try setting up your hifi diagonally. It may just surprise you. Another useful trick can be to veer off the center line. This isn't about the stereo triangle where it's key to have left and right speaker at equal distance to your seat. It's about setting that up not perfectly centered along the room's middle axis to create slightly dissimilar distances to the sidewalls. A little deviation can work really well yet not tell visually. So experiment beyond the text book. If something doesn't work, put things back. Moving bits around doesn't cost a penny yet often makes that 5-10% difference between nearly and all the way there. It could even be more. Why leave that under the table? Often the difference between good and great lives precisely in these margins.

… most likely to be continued…