That was simply unlikely. Regular readers remember my July 2017 Ecobox Daydream review. It covered a dipole design based on a concept by Aleksandar Radisavljevic of Raal Ribbon who listens to something similar at home, albeit with winged deflectors and lower-placed woofers. Regular Warsaw correspondent Dawid Grzyb subsequently reviewed the more upscale A Priori for HifiKnights. There we learnt that Ecobox had started operations by restoring vintage reel-to-reel recorders and turntables. They'd subsequently segued into designing and building their own Schumann and bell resonators. In my Daydream review, Svetoslav, an economist with a master's degree in finance, had introduced himself as "CEO of a young audio company based in Sofia. After our participation at the Munich HighEnd exhibition last month, we believe (and our attendees confirmed it) that we're ready to present ourselves to the global audience." Three years later, they had four speakers models, class A 90-watt monaural amplifiers and sundry ribbon cables. Clearly our CEO's economic muscles had flexed a few times in the interim. 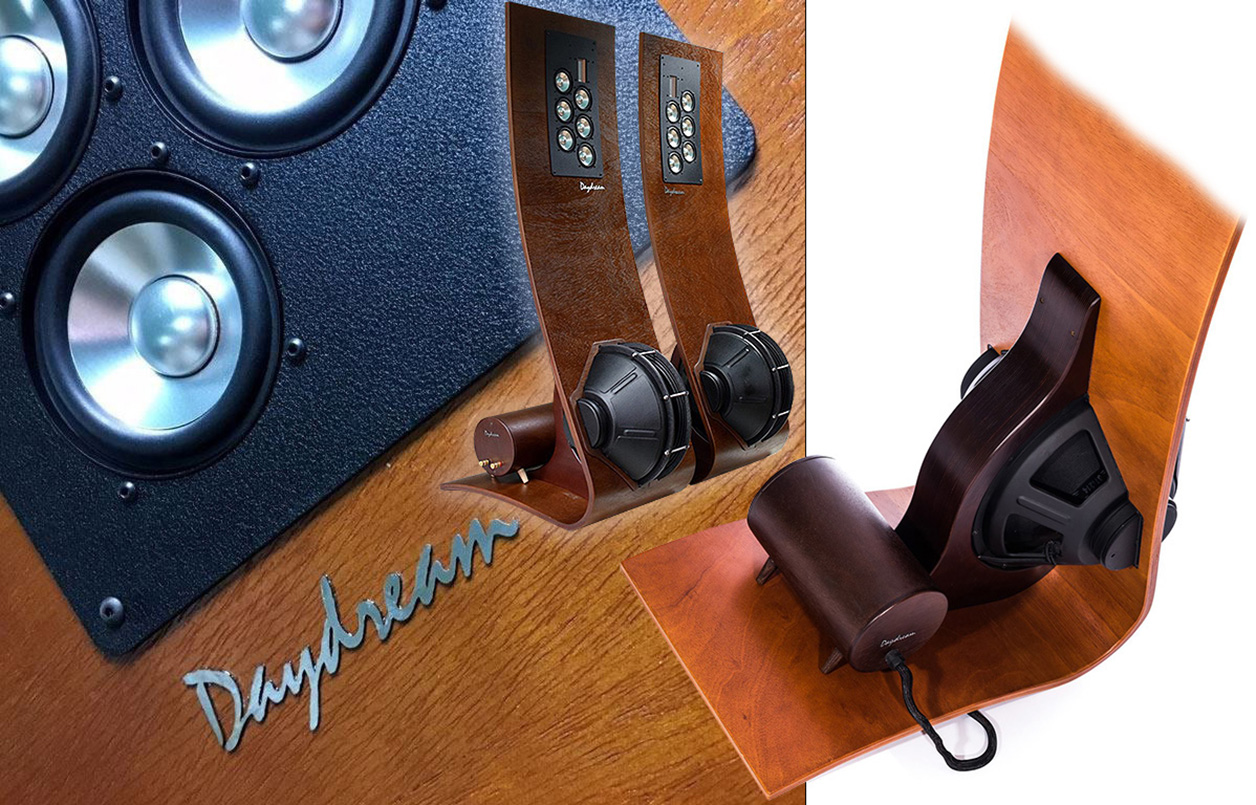 The eco in today's box is also recycled paper. Think 17mm thick panels of pressure-formed resin/cellulose composite. As Wikipedia put it, "multiple layers of paper are soaked in phenolic resin, then molded and baked into shape in a heated form or press. Originally distributed as a commercial kitchen surface in the 1950s, the material has since been adapted for use in skateboard parks, residential counters, cabinetry, fiberglass cores, guitar fingerboards, signage, exterior wall cladding and architectural applications." So Svetoslav's eco isn't just for economy. It's also for ecology.

As a quasi custom shop, his team works with their clients on special finish requests. Interested parties should inquire about what's possible. I'd find out what my loaners would wear when I took them out of their cartons. The classy brass trim seemed a given. Ditto paper cones, whizzers, phat phase plugs and pleated fabric surrounds. But was the driver 8 inches or 10 across, its motor iron, neodymium or Alnico, its loading a true transmission line or TQWT alignment? For more tech notes, I'd work on Georgi. Make him earn his keep. My resident widebander judges would be Polski (Cube Audio Nenuphar) and Yankee (Zu Druid VI).

As Georgi forwarded, the Ecobox EB-02FR is an 8" paper-cone membrane in an aluminium basket with 1.3 Tesla ferrite motor. The voice coil includes Kevlar threads and the total weight of the driver is 1.7kg. Its resonant frequency is 35Hz, its Qts 0.44, nominal impedance 4Ω and sensitivity 96dB/1w/1m. And the enclosure is confirmed as an actual transmission line.