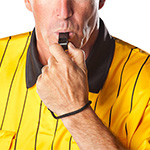 Confirmation bias. It's the instant expectation fulfilment which proponents of blind listening tests claim to avoid. It's not like ordering from Amazon and getting exactly what we paid for. That's an actual legal contract. If we don't get what we paid for, there's recourse. We exchange for the correct item or get a refund. If we get what we thought we wanted but change our mind, there's often a 30-day cooling-off period. We return the item in original nick and get our money back. With confirmation bias, objectivists call out the power of imagination. That's the placebo effect. They say that we delude ourselves. We hear, see or feel things that aren't really there. Of course if we're sick and our symptoms disappear with just a sugar pill, should we care? Must we parse whether it was a miracle, mind over matter, the power of suggestion, self hypnosis or some other mechanism? If our healing doesn't reverse, we probably couldn't give a toss. Or perhaps we might get religion.

Ruminations to that effect wafted like smoke signals from my noggin whilst prepping for an Audio Physic review. I moved out our customary Aurai Lieutenant speakers and in our Audio Physic Codex. I'd not heard the latter since our prior Liscarney digs. Once in Kilrush, the mighty sound|kaos DSUB15 sub had set up shop late last year to clean house on LF propagation by knee-capping my speakers with a 4th-order/80Hz high pass. With the Lieutenant's ~95dB sensitivity, assigning a 25wpc Enleum AMP-23R to them and a 250-watt Kinki EX-B7 to the sub had arrived at perfect gain balance. With the 4-way Codex six dB less efficient, I now fronted them with two Kinki monos. The passive sub got a 200-watt Ncore mono. That threw off the gain balance. The sub no longer went loud enough. Unlike Enleum's variable gain, the monos on the mains were fixed. They couldn't be attenuated to make up the difference. Raiding the hifi closet pulled out Wyred4Sound's preamp. Above 63 on the dial it adds gain up to its 80 end stop. That did the business and added remote over the sub's volume. I could A/B Codex with/without sub; and incidentally not for more or less bass extension but earlier or later stoppage. What's that you ask? 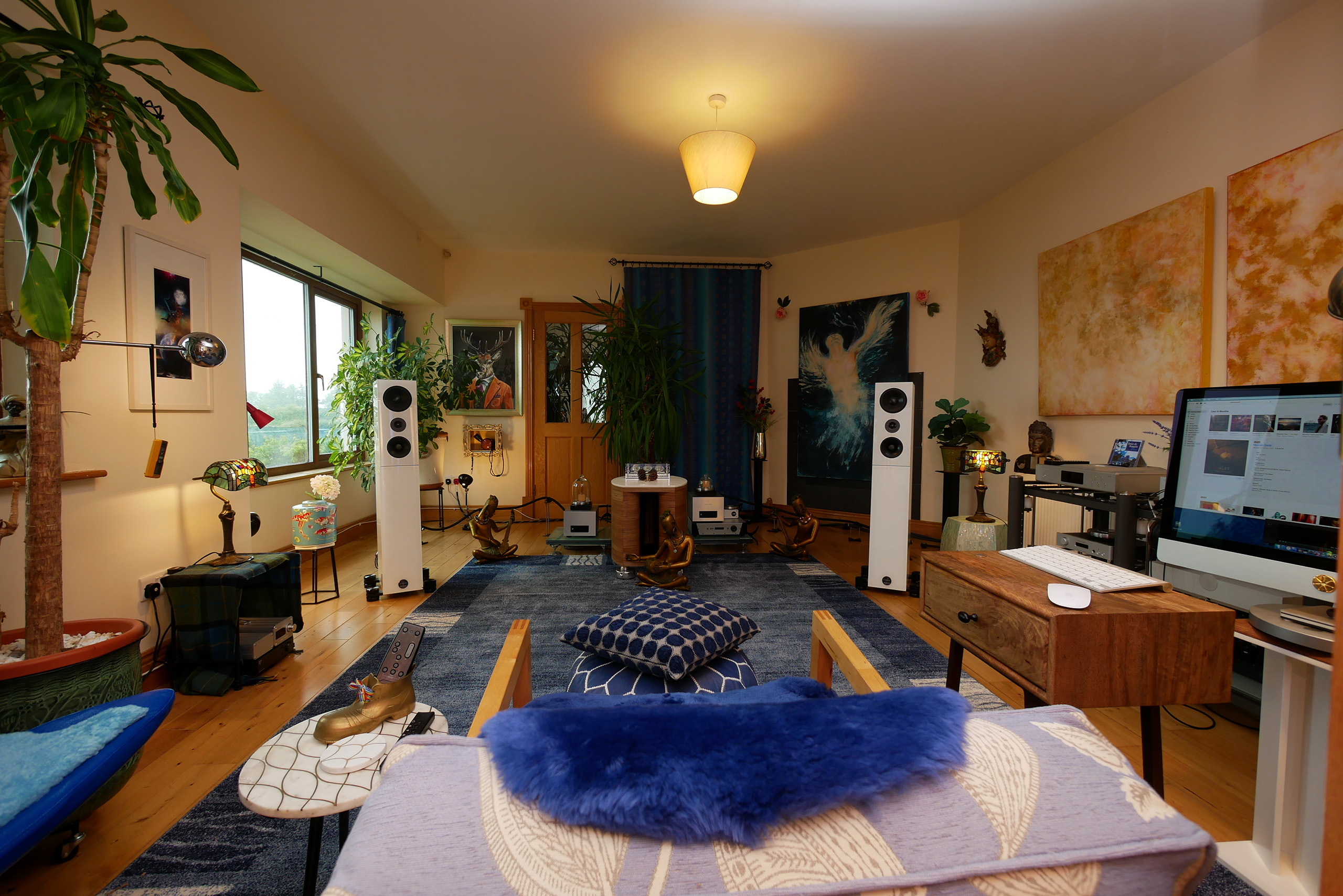 Manfred Diestertich's invisible 10-inch woofer works in a separate mini box inside his Codex. That vents out a narrow slot behind the front baffle facing the floor. Run unfiltered, its bass is better controlled than most ports. In fact, listeners used to ports—the vast majority in other words—would welcome even more extra fat and fullness. They'd be utterly oblivious to the attendant blur it causes in the time domain. Once I inserted my usual hi/lo-pass filter into this chain, I was back at highly directional bass which works to the velocity converter not pressure generator principle. Now the low end exhibited far better stoppage so much reduced overhang. Two sub 100Hz room modes no longer triggered. Together that erased the floating silt whereby full-range Codex still stirred up a mud-floored creek, individual bass beats like stomping feet. Instead of crystalline running water I had suspended mud particles. Those obscured my view into the water and the brook's bottom. Just because Codex's bass alignment showed superior self damping than I remembered from the prior room didn't negate the big gap it still suffered compared to the Ripol's handling of the same bandwidth. Once you hear significant gains in overall clarity from superior intelligibility due to greater textural linearity, why would you want bass that so clearly stirs up mud?

Writing in a good week prior from Hifi Deluxe, the alternate HighEnd Munich 2002 show in the Marriott Hotel, had been reader Vincenzo Picone. He moonlights as a sound|kaos brand ambassador for France: "You'll be interested to hear that once we switched speakers to the Vox3A monitors or Libération open baffles, we ended up using the 75Hz hi/lo-pass cut-off most of the time. Sound quality improved across the full spectrum: bass because of the unique Ripol dispersion in the low frequencies, mid-highs because of the much easier load on the main amp and drivers which translated to greater dynamics and transparency. Pál Nagy passed by yesterday evening and was very pleased about the contribution of his icOn 4Pro passive preamp and analog filters to this progressive setup. It will take time to shift customer habits but for those who have tasted it, the sound|kaos monitor + Ripol sub combination is the new king in town." I replied: "I'm not surprised at all. Running Ripol higher up increases its room-cleaning benefits because modes typical between 50-120Hz get cancelled out. That cleans up not just the bass but also the midrange." Vincenzo concurred. "Room cleaning is exactly what's at play here. Ghostbusters! The question now is what is the optimal Ripol cut-off frequency: if 120Hz is indeed the optimal frontier, shouldn't we go for two smaller Ripol subs in stereo?" 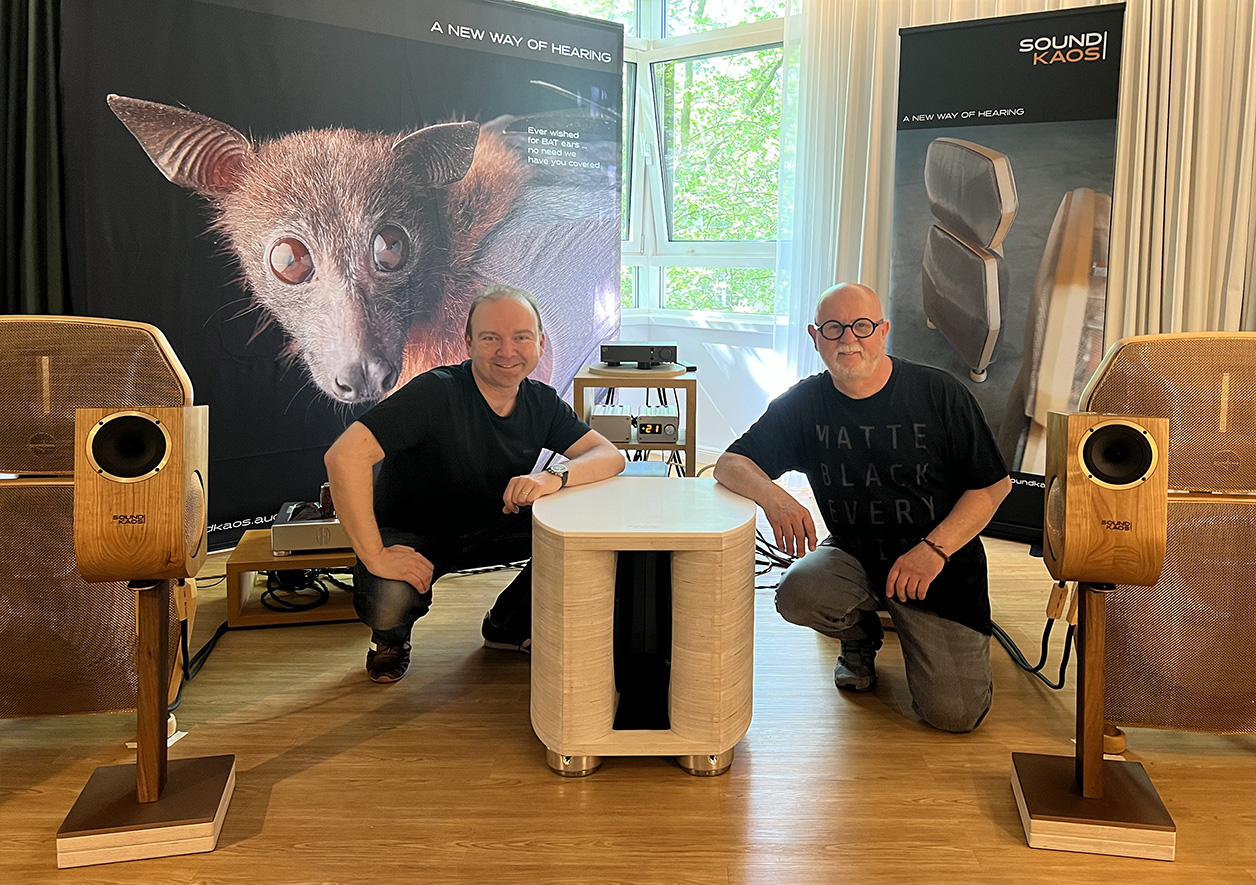 I answered: "At 120Hz I might indeed lean toward two 2×12" subs. The cut-off will depend on room size. The smaller the room, the higher the room modes. Now Ripol action across a broader bandwidth is advantageous. Without compensation for their 1st-order roll-off below the resonant frequency, we've simply not yet heard all that Martin's Ripol can do on ultimate extension. It's why Siegfried Linkwitz always actively compensated his dipoles at the bottom; or championed a box sub below the lowest room mode. It's why Pál's Gradient Box will be important. Not only do we get to select the filter hinge we find best, we can dial in an all-pass shelving to notch up 20Hz by +3dB or +6dB. That'll be another frontier to cross. Hopefully visitors to Martin's exhibit recognized what was responsible for the difference in clarity."

To illustrate that difference for his clients, I pointed Vincenzo at Andrew Startsev's FIR filter build into the DSP of his active DMAX Super Cubes whereby he cleans up their time domain behavior for superior driver stoppage. Now playback better tracks recorded impulses rather than lingers on to cause the post ringing we see in the right and middle section. That's the acoustic equivalent of the post ringing of digital filters but far worse. Omnipolar radiation of ubiquitous sealed/ported bass reflects off all hard surfaces. That's four or more walls, ceiling, floor and hard furnishings. Now low frequencies arrive at our ear as a mix of a few direct and far more delayed/reflected sounds. Delays equal late. Dissimilar delays stacked atop one another equal blur. All of it occurs far later than the microscopic post ringing of digital filters. It's why today's header was Earlier Stoppage. If we want high res to mean high resolution not resonance, stopping on time is key. Copious room treatments of sufficient cubic mass will absorb otherwise reflective low frequencies. That's one very big solution. Active bass traps à la PSI Audio are another and smaller one. Cardioid bass à la Ripol [zero DSP] or Kii 3 [heavy DSP] is yet another. Now we're down to just active sound makers, not add-on absorbers. I've gone Ripol because it decommissions the need for bass traps; but unlike the fully active Kii, doesn't decommission the remainder of my separates which I continue to need for reviews.

The upshot and intended takeaway: Adding a 2 x 15" subwoofer not for extra reach—Codex solo is good to an in-room ~25Hz—but to do the job which massive bass traps would otherwise do remains a rather novel concept. Without thinking about how it works, most in fact will write it off as imaginary. Having just reconfirmed its efficacy on a very capable full-range speaker called for one more editorial on the subject. Opportunities to hear this in action are sadly rare. Certain Bastanis, Cygnus, Ecobox and Voxativ speakers include Ripol bass systems. ModalAkustik and sound|kaos offer standalone versions. To my knowledge that's it. As a very obscure but terrifically effective solution, Ripol bass deserves all the visibility it can get. At least that's my excuse. What's yours? Confirmation bias? Or could it be (cough!) lack of imagination? I've gotten true Ripol religion. I hear its relevance every time I return to basic 360° box bass no matter how much I otherwise like the speakers which that's part of. With Ripol, I no longer have to dream of superior bass. It's here now. For real. That's confirmation of my Ripol bias. It's also instant expectation fulfilment. All it takes to prove it is bypassing the hi/lo-pass filter box. That means unplugging and reseating one set of interconnects. Anyone can do that. Anyone can hear that. It just requires having such a filter; and a Ripol sub. That's where la merde drops. But don't shoot the messenger. Aim your displeasure at an industry that hasn't caught on to provide us with more such options.

Hello? Anybody out there? Houston, I think we have a problem!

PS: "When asked in an interview Tuesday to give advice to an elderly widow whose energy bills had risen so much that she had been forced to ride the bus around all day to stay warm, Boris Johnson the British PM began his response by taking credit for introducing free bus passes when he was the mayor of London [from a CNN report May 5th, 2022]."