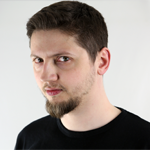 After the maturity exams, I badly wanted to go all in with my language skills. Yet it didn’t happen. I miscalculated and back then aimed too high. My English wasn’t sufficient enough to earn a cozy place at the university – painful perhaps but certainly true. Reality stomped confidence fuelled by pride. That’s what happens to youngsters with a bad attitude. But it was a mistake badly needed. Failures shape character, at least for some of us. My lesson was learned the hard way but learned nonetheless. People divide into two groups. In time of great crisis, some get devastated, shocked and numb. Others will, in their biggest and priciest failures, see a terrific wake-up call. Clearly I was the only one to blame. At that time I was already aware also of my fair sculpting skills. Someone from the family was in the dental prosthetics business. It all added up neatly. Shortly the cat landed on its four feet. School was finished, the diploma received and joy rightfully earned. That kind of achievement creates more courage and motivation. Instead of taking the easy opportunity, I decided to leave my comfort zone and try something I always wanted in the first place: writing. Chasing down the rabbit hole was exciting especially if there was candy at the very beginning. In the worst case scenario, I had a place I could return to. That was a clear win/win.

At that time I was really deep into computers. Early 2000 was the era of Poland's first broadband Internet providers and for geeks like me, the world was changing in front of our eyes. Some time passed and I'd acquired a fair degree of computer knowledge. One day the biggest native IT site—and as it turned out, one of the biggest in Europe—published job offerings. Everyone with knowledge, good attitude and decent language skills could apply. I happily did. That was June 2007 and I was in. Fast forward several years and I’m still working for PCLab.pl as a photographer and reviewer. It started inconspicuously enough. All the good and interesting topics like CPUs, graphic cards, mother boards and so on were already taken. Left were games and audio-related gaming peripherals. That was my niche then and from time to time, purely for fun, I still write about those things. Old habits die hard.

After reviewing my first headset, I learnt that it wasn't easy. The very critical crowd was huge, demanding and came with very decent knowledge to test mine. There was no place for newbies. To keep up, I had to dig in. Head-fi.org rather quickly revealed itself. "Hi, welcome to HF and sorry about your wallet!" That's how people greeted me. Not even one week passed and my shopping list was full of stuff like Westone 3 IEMs, an iMod and the p-51 Mustang amplifier from Ray Samuels Audio. But that was just the beginning. Shortly after I’d found my happy place – headphones. I acquired Sennheiser HD800 along with Audio-GD's Phoenix balanced monster. Then came Audeze LCD-2.2, on top of that additional IEMs. And then some. Not too long ago ten custom earpieces from brands like ACS, Westone, Heir Audio and Alclair were sitting in their Pelican boxes. But that still wasn’t enough. Not even close.

There was additional hi-octane fuel waiting to incinerate by way of a decently damped cellar which was yet to be used for audio purposes; surely a crime begging to be solved. First came a small Amphion + NuForce combo, then a Denon DCD-1510AE and PMA-1510AE followed. I still have those Denons as a thing of sentiment, tokens to remember the very beginning of my home stereo adventure. From there and to my great joy, things escalated rather quickly. Collaboration with two domestic audiophile print magazines followed, my own PCLab.pl blog happened and now, 6moons syndications. It's lots of work but happy times. By mid 2015, my hardware setup included HifiMan HE-1000, Questyle CMA800R, LampizatOr Level7, KEF LS50, Boenicke Audio W5, NuForce REF9 V3SE, Asus Essence III and Hegel H160. This inventory keeps growing rather fast. The sound improves in often marvelous fashion. And that’s what this is all about. During my school years, I never did much homework, hardly any in fact. Now I have plenty. Simply stating that it has to be done would be criminally mild. There’s really no other way since I completely devoted myself to journalism. Writing and learning something new and audio related is what I do every day. But this time it’s different. This job has its own ups and downs but it’s a hobby above all else. This leads to fun which provides happiness. And that's a priceless thing to have on a daily basis even when one feels uncomfortable and the learning curve is steep. In this business, it’s worth the effort though. I really believe that. Cheers.

PS: Dawid is the co-publisher/owner of the Polish online magazine HifiKnights.com. As such he routinely submits articles for syndication.