For limbering-up calisthenics (my own?), I brought the not small Nenuphar upstairs into a secondary bedroom system. This would also report on happiness in smaller spaces. Delivered on a single palette, each speaker came in a sturdy cardboard box with massive foam cradles top and bottom. It then was additionally sleeved in a thick cotton frock for paint protection. My all white loaners already had the new white-gloss baskets. This made the overall package look more stylish and light than size and geometry would do otherwise. Additionally, such lacquers are far less reflective and fingerprint fussy than high-gloss black. They wear easier and make the taking of better photos easier. At 400wpc/4Ω, a Kinki Studio EX-M1 integrated would—only attempt to as it turned out—pursue maximally developed low frequencies. Its gain structure and Nenuphar's 93dB spec also meant that for stout room volumes, I wouldn't really eclipse 20 on the dial for most files. With its attenuator in 0.25dB steps, that simply wasn't an issue. 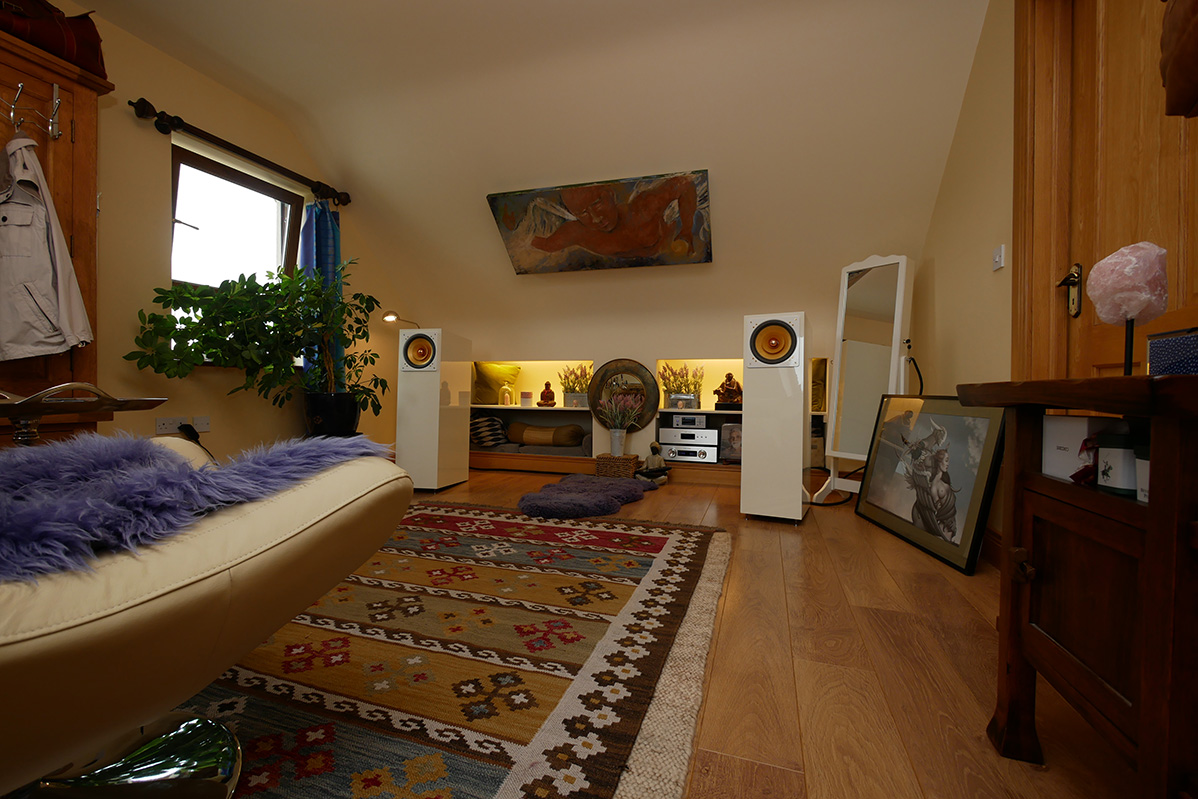 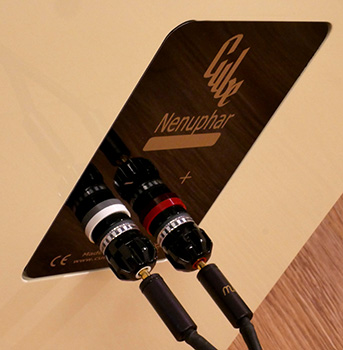 Mild toe-in crossed far behind my chair. This proved better than firing straight out. Too much toe-in elevated the upper presence region as the graphs indicated. Fixing the perfect angle that's right for your ears and room will be key. Making this so easy an adjustment is practical. There's quite a window of variability so don't underestimate the importance of this bit of generic hifi housekeeping.

Here that's more important than in general. With a single-driver speaker, bi-wire terminals would be silly. Nenuphar thus only needs these luxo 5-way singles on a black terminal plate with basic model, company and country of origin markings. A pair of tall spikes for the fronts executed the designed-for rake automatically. In the back, Nenuphar sat on just rubber bumpers. Shallow floor protectors for the spikes came with the shipment. Inside the enclosure's big floor opening, an invisible black cloth grill prevented ingress of insects like spiders which love to nest in dark places.

With low bass mostly MIA, I cued up Mercan Dede's Dünya Vol.1 album. I set it on endless repeat to stout volumes whilst Ivette and I spent a day in faraway Dublin. At lower levels to not pollute our digs when back, I added another day of working hours. Then it was time to lend an ear before relocating the show into the main downstairs system. By now some bass had signed in for duty. In no particular sequence when impressions against one's status quo fire instantly, novelty contrast at its peak, staging went point-source panoramic and way deep into the room's front corners. That meant unusual width which went virtually wall to wall. It expressed nicely articulated depths to lock sundry sounds to their very specific distances.

Detail intensity mimicked that of top thin-membrane headphones. They peel out percussive ticks, clicks, taps and hits like pelting rain on a bright tin roof. This gave polyrhythmic fare very high perspicacity. Think of a timing-first perspective. It clocks music on its transient prickliness. It's very beat driven. The sensation of musical motion set by percussive accents in the microdynamic domain has high priority. That differs from a reading which focuses us first on tone, flow or density. This one prioritized time keeping as music's inner glue or tension. It did so at very high magnification or 'urgency'.

Directly related were brightly lit densely populated soundstages. Human hearing relies on transients to localize sounds. The higher a hifi's transient fidelity, the stronger our ear/brain's biological DSP actualizes this virtual seeing. Here the effect was one of banishing all of the typical half shadows. Data softened or partially enveloped stepped out into the light. This created more detail. Vistas now presented as unusually occupied or animated, not half empty and more static. It was plainly higher data density or pixel count with profound informativeness. You imagine yourself at the centre of the action where all is visible. Particularly in the upper vocal range, the sense of feistier dynamics and insight over our usual 5.5" Accuton two-way towers with transmission lines was startling. On-string action plucked, struck or bowed as well as drum set exploits were nearfield exposed and explicit. Not only was there more detail, it sat in atypical contrast and stark relief. It felt intrinsically lit up and very lively. A potential veering into the unnaturally bright was partially anchored by low-end counterweight. Just so, the illumination or tacitness wasn't equal in the bass. Though not so much upshifted in tonal balance, the combined qualities of dynamic impact, transient grip and articulation played dominant in the mids and treble. Here the presentation was nonlinear. It was dynamically top heavy. The lid which had blown off certain parts of the bandwidth hadn't come off equally all over. To dig deeper, I needed the downstairs reading with various amp options for either confirmation or an alternate take. Perhaps the powerful Kinki amp actually overdamped these high-gauss drivers? Would mild subwoofer assist coming in low enough be advantageous? The big rig had Zu's tall Submission in standby just in case. Fellow widebander aficionado Jacob George of India's speaker house Rethm uses the imagery breath of life relative to intense +1'000Hz illumination. The experience which his term points at certainly arose with Nenuphar. Its dynamic nonlinearity—higher acceleration above, lower acceleration below—had a definitive effect. This did not rely on elevated SPL to kick in. Think twitchy and quicksilvery reflexes, a bit like a live wire that spasms across a floor shooting sparks. Despite recognizing it as a form of special effect for a localized hence skewed quickening, it was quite addictive. It behaved like musical caffeine. At the same time, it also was a high-wire act sans safety net. Close-mic'd vocals could seem pornographically exposed well down their throats; unduly intimate including spittle and hyper pixilation. Poorer productions could suffer steely or glassy undertones not usually noticed. Obviously this powerful effect had to be managed to not flip. Just what optimally managed would mean I still had to sort out. With class A SIT1, SIT3 and F7 amps from FirstWatt, a class A Pass Labs XA-30.8 and class A/B LinnenberG Liszt monos, I had some terrain to explore. It would simply exclude the typical valve amps widebander fans champion. The larger downstairs room would also have me sit farther away and add higher ceilings. Even so, the upstairs sessions had already signed off on general suitability for a ~4x6m room with less than a metre space between back of speaker and front wall. Nenuphar staged so superbly that unsightly placement deep in the room wasn't necessary. Especially in the white lacquers, the boxes looked less imposing than they would in black to reduce the visual impact on a smaller space. Being hifi whisperers to electrify at very low SPL slotted in the same drawer. Smaller rooms want lower volumes, hence speakers that come on song sooner. Check, check and check. Just so, Nenuphar's mature dimensions and bandwidth meant that it should work ideally in bigger rooms. Time to get the stair-devil furniture dolly out of the garage and move these Polish speakers into the main system. But first, the obligatory comparison to Zu's Druid VI. On the same Kinki integrated, the Americans had plainly more bass reach/power and the overall warmer slower meatier personality. Whilst they didn't turn the tunes anywhere near as inside out, they also well avoided a line which, on poorer productions, Nenuphar brazenly crossed. At this point I suspected that the downstairs LinnenberG Liszt monos with their 1MHz bandwidth and loaded speed would play similarly against the Poles. They did. DC-coupled ultra-fast amps with 3rd-order dominant THD plainly weren't the ticket. The sweeter class A Pass Labs XA-30.8 was better. Still, it behaved unusually light in the bassment and by contrast to the Kinki/LinnenberG polarity somewhat opaque. By now I strongly suspected that I overdamped these high-flux drivers. They didn't need/want anywhere near so much control. Wholesale transformation came from the 10-watt FirstWatt SIT-1 monos. Those hit the mother lode. Suddenly the bass showed up in full to justify the specs and graph. The prior explicitness which could sound hyper pixilated completely vanished; quite as though I'd imagined it. Finally, the tightly tensioned nearly overcooked timing relaxed. Now it exhibited free elasticity without any loss of clarity. What worked so well with and for Druid VI, Albedo's Accuton ceramics and Audio Physic's 4-way Codex was plainly wrong for Nenuphar. Repentance—the Biblical term for a 180° turnaround—just meant recognizing it, then being lucky enough to possess amps which stopped misreading the situation. Transistors per se weren't the issue. Hitting upon the right ones was. With the SIT-1, the performance-based ask was spot on. The pricier Nenuphar performed in a higher league than Codex indeed. And of course, the SIT-1 and Codex wouldn't work at all. Horses for courses and right tools for the job.