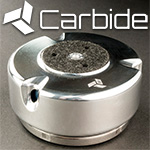 This review first appeared in December 2021 on HifiKnights.com. By request of the manufacturer and permission of the author, it is hereby syndicated to reach a broader audience. All images contained in this piece are the property of Dawid Grzyb – Ed. 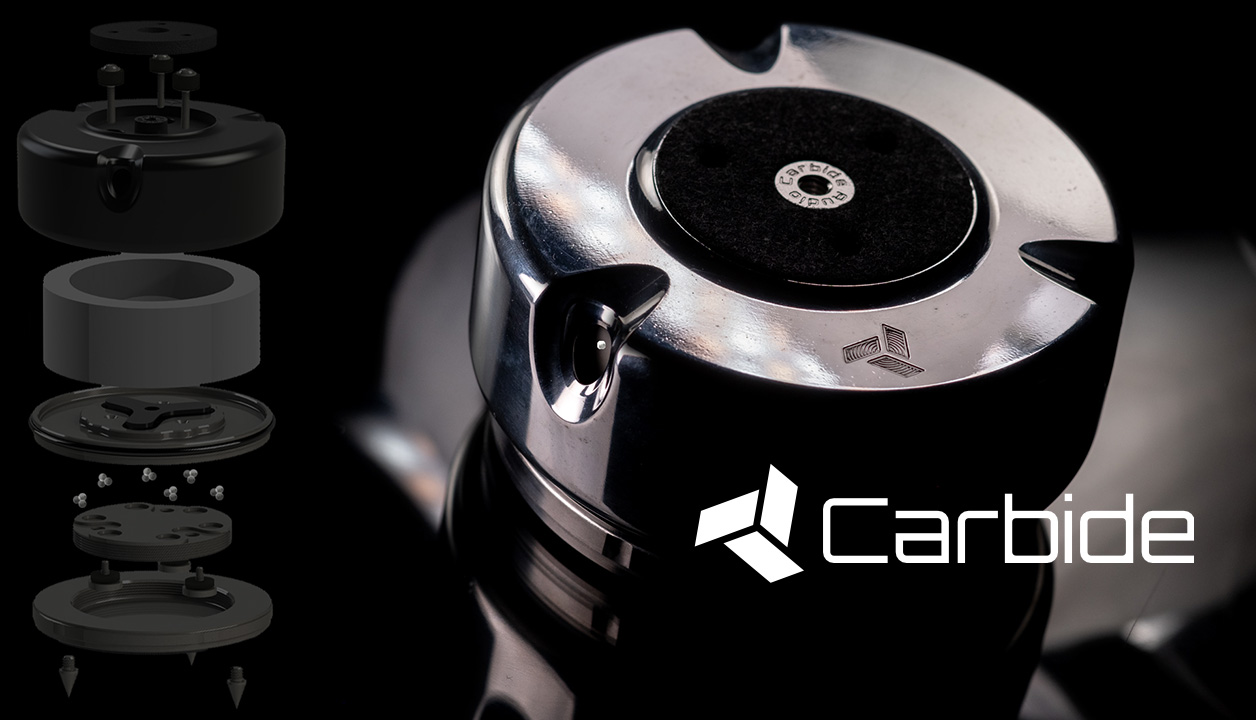 Newcomer Carbide Audio have currently just one product in their roster but on appearance and topology the decoupling device baptized Carbide Base is unlike any other anti-vibration footer I've seen. Now is the time to find out whether it's any good. Anti-vibration accessories aren't frequent guests at our site but those I did review since our launch were beneficial where it mattered and worked exactly as advertised. Testing such devices is neither complex nor difficult. Their application nets pretty much instant sonic shifts and the only question to answer is on the type and intensity of the changes. That said, Stacore's Advanced platform and the Ansuz Darkz T2S footers turned out potent enough to surpass the mildly effective supplementary status that's so often associated with their decoupling kind. By my standards the performance gains from these two costly specimens were drastic to count as effective means for profound results. Both were essentially directional sinks designed to absorb input resonances and prevent them from re-emerging. Other than that they were vastly different in execution.

Stacore's platform was primarily made of Italian amorphous slate with an elaborate internal air suspension network plus roller bearings and viscoelastic material between the top plate's twin layers. The Danish footer comprises 2×3 titanium balls captured between three ultra-hard titanium discs with tantalum, scandium and diamond skins etched into their surface. Although the former is an unapologetically massive full-sized behemoth and the latter a tiny puck, their respective roads led fundamentally to the same place. Now let me introduce you to yet another solutions that's unusually sized. In late October an introductory mail from Carbide Audio founder Jeffrey Jenkins expressed interest to send me his first commercial effort by way of today's Carbide Bases. I'm fine handling a DAC, amp or speakers but compact decouplers just make me smile. Little did I know that the man's devices were of more land-mine caliber and would arrive 24 strong. Imagine my surprise upon receiving a 30x30x30cm package that hit the scale at 53kg!

Since the name Carbide Audio didn't ring any bells, their website was my first stop. Its cleanly executed buttoned-up look with easily accessible information implied commitment to the decoupling cause with express seriousness. Anti-vibration products tend to divide roughly into soft and hard types but this footer combines multiple hard-contact roller bearings with a compliant viscoelastic ring for two-fold action that's optimized to handle horizontal and vertical isolation separately. The ring acts like a spring of low spring rate for a low resonance frequency, wide isolation bandwidth and over 65% of input vibrational energy conversion to heat. Jeffrey explains that viscoelastics beat metal springs on resonance dissipation due to their higher loss factor. Achieving a low spring rate simply demands tall thin walls which compromise stability. The tricky part thus was arriving at a ring-shaped material that remains mechanically stable under heavy loads and still effective at its core job. It took two years of R&D to get there. 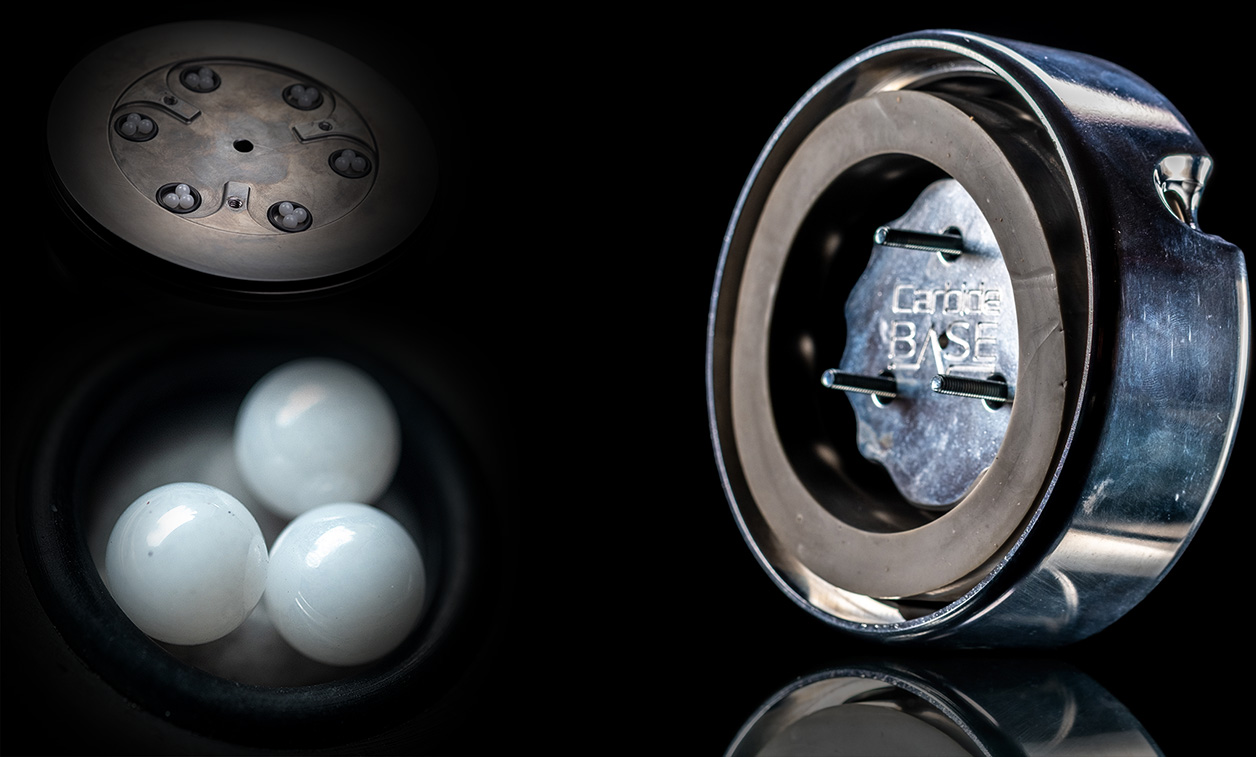 A single Carbide Base measures 64x124mm HxW and weighs about 2.2kg, a lot for an add-on footer. Still, upon taking a closer look at the design, it becomes apparent why it must be so big. Its internally threaded bottom section with three round felt pads houses a compact plate with outer threads to regulate height which proved useful with my room's uneven concrete floor. That threaded piece bolts to a larger plate above whose 6 wells of 3 each tiny zirconia balls make for deliberate play. The same roller-bearing plate also seats the critical ViscoRing while the end cap's milled underside locks this squishy insert in place and prevents it from bulging outward. Protruding round felt pads on top prevent scratches on supported gear. Each puck is fitted with ¼"-20 threaded top and bottom holes to accept optional spikes to pierce carpet or a component's footers. Their internal elastic rings compress under load but it's quite clear that these massive footers are built to withstand a lot. On assembly, internal complexity and substantial feel the asking price of $270/each seemed justified already. If shiny silver as showcased in my loaners isn't your color, semi-matte black is the alternative at no extra cost. A set of four light/medium/heavy ViscoRings can support up to 32/64/318kg loads respectively. They work best near their upper loading range. Should you need a different ring, each sells for $29. Just unscrew three small bolts on the end cap to access the sticky elastic insert, unpeel, pop in a new one, bolt back the top. Convenient. Now we should move onto sonics but during our email exchange Jeffrey provided lots of useful info that turned into an effective mini interview.