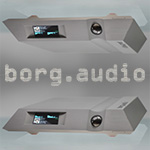 May I borrow your ork? If we did Lord of the Rings, that'd get us at bork. Hello loaner ork. Grunt.

Alas, wrong movie. borg.audio who insist on the spelling invoke Starship Enterprise and its crew's cybernetic phantom nemesis, the hive-mind Borg. Fittingly, two of their models go by warp. Check. Another two are called dune. That's another movie altogether. But who's counting? Uncheck. If you are, counting, pricing for the dune/warp duo of 3-in-1 server/DAC/preamps is €16/16.5K respectively. €16'000/pr also buys you a pair of matchingly styled dune/warp mono amps. That's €32'000 for the set. The next level up gets you at €36K for the zoom components. The final level is poignantly called edge. That means the Rubik cube €50'000/pr flagship monos below. Hello Danzek!

So we need properly deep pockets to proceed; or focus on the mobile player float which doubles as remote control for the grown-up kit. All of it is from the German city of Nürnberg. As youngsters living in Kiel on the Baltic Sea, 'twas simply the place whence our favorite Christmas Lebkuchen aka gingerbread cookies came. We knew nothing of its war-crime tribunals when our parents were still young.

Before we take another step, let's acknowledge the obvious. This milled-from-solid gear looks strikingly different. It's quite as though it had just, er… beamed down from another dimension. I won't invoke The Twilight Zone. Let's not mix up one more movie franchise. Still, more conservative tastes could certainly think so. Fair enough. Today we're simply going where no hifi has before. Cue the famous musical theme. This industrial design is in our face. Hi tech. Hewn from solid. Angular. Sharp-edged yet sleek. Borg. A bit—a lot?—alien. Definitely not your usual 0815. That's colloquial German for business as usual.

I'm quite uncertain though who the intended buyer is. Prematurely well-off young IT geeks? Glass 'n' concrete lofties? Abstract art collectors? SciFi buffs? But then I'm at an equal loss with current D'Agostino. The point is, aside from sonics and functionality, today's upscale gear is under pressure to differentiate itself; at a glance. It's a point borg.audio have taken to heart and deliver upon. Like mondo-retro Thöress from Aachen, you won't mistake their gear for anything else. As they say, that's half the battle? Make a statement. Plant your flag. Gather your troops. Stand for something. Hold your positions.

The future will tell how well they judged their audience. It's happily not the battle reviewers fight. We're on about the sonic half whilst checking that fit'n'finish level and all functions operate. Otherwise any positioning on price and aesthetics we cover in passing only. Those things are up to the buyer. They really are not—or shouldn't be—our concern. If they were, we should refuse all assignments whose loaners fall outside our fiscal or stylistic comfort zone. Wouldn't that be boring? So let's take a walk on the fiscally and cosmetically more Borgias side of things and learn what borg.audio are all on about. After all, with looks like these, there must be quite a story behind it all, mustn't there? How about futuristic tech inside these monolithic casings? Shall we breach the Borg's enemy territory and dare an adventure? Nothing ventured, nothing learnt!

And of course it's no coincidence that the above machine would display Pink Floyd's Dark Side of The Moon at 24/384. It stands for uncharted territories and warp speed. Once we learn of 3KW power supplies and switchable class A/class AB operation, the imagination begins to heat up quickly. If yours doesn't—let's switch movies one last time—you must already be in Elysium.