If you live outside South Korea, buying direct from Aurai Audio is the only other way to nab a new Pratali speaker. It's a bit like Tullio Masoni's 200sqf vineyard. It sits on the roof of his house on Via Mari 10 in Italy's Reggio Emilia. It produces just 29 bottles per annum. Unlike their €5'000/ea pricing, Alain's direct scheme goes the anti-exclusive route. It eliminates the usual markups. Still, few know Aurai because they don't advertise or attend shows. On that score they are très cher. Hence my coverage. The rest is up to you. I'll simply add the name Franck Tchang. By doing things well different far off the mainstream, Franck and Alain could be brothers from another mother. As it happens, they're both self-made auteurs; and call France their home. It must be the fresh baguettes and cheese. Or the French wine? More likely it's that Gallic propensity for la révolution. That always starts deeply underground. And wouldn't you know it, both Paris and Marseilles where these gents live sit upon catacombs. 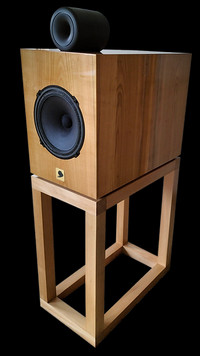 Alain's friend Antoine Rouault runs the one-man Normandy shop where Aurai cabinets are born. He doesn't do boats or the machinery required to bend his preferred Baltic Birch Ply. He focuses on very solid rectangular boxes and premium veneers in semi or gloss. Buyers must ask whether curved MDF sounds better than squared-off cross-layered real wood. They must also forget about egalité when it comes to hard versus soft membranes. Brands like Børresen, Monitor, Raidho and Vivid promote metallic diaphragms hardened with ceramic, diamond, tantalum or titanium skins. That prioritizes precision and speed. Others prefer soft drivers so silk-dome or thin-film tweeters, polypropylene or cellulose cones. Those tend to prioritize body and tone.

As usual, generalities brush over exceptions. They cancel out our sixty shades of gray. Still, this subject remains relevant to any loudspeaker shopper. It 'sets the tone' thus mandates consideration. There really isn't one fraternité as La Révolution imagined. We have numerous aural brotherhoods. With speakers, basic diaphragm compositions mark a dividing line right through any theoretical notions on egalité. Disparate means do influence the sound in recognizable ways. It is only liberté—to pick and choose as we fancy—that's the one unassailable quality no matter what. Otherwise things aren't created equal; nor do they sound the same.

In the Z range [Z215 at right], the tweeter and its 3.3kHz filter entrance remain the same but mid/woofer diameters scale from 6½ to 8 to 9 to 11 inches. The latter three involve a horizontal tapered quarter-wave tube so significant depth. Today's smallest of the bunch foregoes open-back dipole loading. With my intended early fadeout, I had no need for the bigger drivers' extra LF reach where the loading actually makes it rather less than a ported box to rely on subwoofer augmentation. Still, we'd anticipate other benefits like improved macro-dynamic shove and chewier chunkier tone density as cones enlarge. But I expected the smallest driver to own the resolution advantage in the upper midrange. That and no interest in special bass gymnastics had my vote. Having had this conversation with Alain before, he of course knew. He could spring his surprise solicitation for this particular model just so. Again, played like a fiddle. Not was Alain's surprise that it took a year past my prior reviews for more and more people to contact him now. "C'est bizarre tout de même, ces temps de latence." Latency exists not just in DSP crossovers. Fiddle-de-dee. To support all the Z's unusual depths, Aurai supply them with unfiddly solid-wood open frame stands. Those make for a more classic look than the high-mass metal contraptions so beloved by modern audiophiles. The Z165 is a conceptual retrofit to RetroFi. Walking the 2.1 talk as it sings upstairs these days. 2.5ms digital latency in the Dynaudio sub compensates with its forward placement for correct time alignment.

To learn more about that, I asked Alain. "The current driver is a prototype which can be made by any of the French subcontractors so AAC who acquired Audax, Fertin, Supravox or others. It's an AAC membrane with a 16mm Nomex coil, AAC rubber suspension and Supravox salad-bowl Ferrite motor. I revisited all of these ingredients. My work must have advanced since this is the perhaps best mid/woofer I've listened to in my entire life. It will still evolve but the core is extraordinary already. At 91.5dB it's really an ideal driver. I'll have two versions, one as a dipole like the three bigger Z monitors, the other one the laminar bass reflex you'll get. That can do without a sub. The dipole versions are meant to go with one. I personally love the ported box. It'll eventually replace my M1 and M3 because its midrange quality is beyond compare. Next week I'll send more measurements and photos."