Given how this amp didn't choke when asked to fire on all cylinders in the bassment, it was no surprise that overall too, dynamics would be very developed. Microdynamically good for the money, the macrodynamics exceeded what's typical in this league. That recalled NAD's M22. Reviewed prior to the current MkII version, it too was a class D concept with a friendly tonal balance mated to vigorous dynamics. Unless memory fails, the NAD was simply voiced more ‘romantic' whereas the Ascendo felt overall more linear, then topped the M22's dynamic chops. Regardless, if you want a lively, very direct and rhythmically adroit amp which is as good at teasing out the micro fluctuations on a plucked Western guitar as it is at scaling up big orchestral peaks, Ascendo's DNA1000.2HE has both your numbers. Another strength was soundstaging. This amp started right at the speaker line with normal width, so little action outside the boxes. But it surprised with its depth layering where I heard a lot more air between/around instruments and voices than expected. Not bad! Best of all was the dimensional relief and body the Ascendo managed for individual sounds. This particularly impressed with vocals. Take the Tori Amos cover of "Enjoy the silence" from her Strange Little Girls album. My Musical Fidelity monos create the stronger edge limning, the Ascendo stereo amp modeled her rounder and more organic. But the illusion that Amos faced me in the flesh was stronger over the German stereo amp than the thrice-priced British monos. Chapeau! 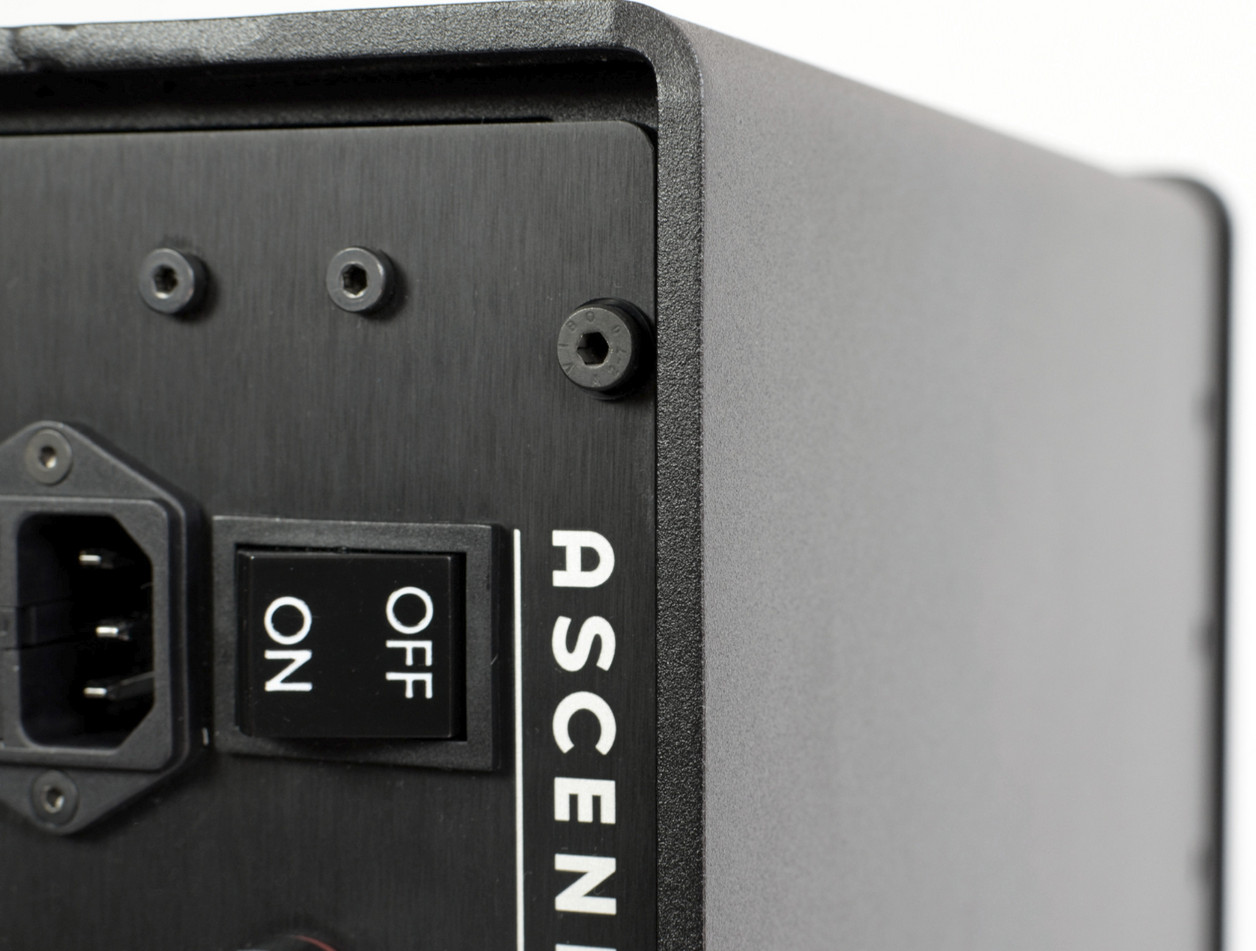 Intermediate conclusion in stereo mode. On tonal balance, Ascendo's power amp was dialled for long-term happiness and held the ace cards of tangible embodiment and highly dynamic energetics. Good? Considering its ask, I'd call it very good. But there was more.

Mano-i-mono. Obviously going mono wasn't twice as good just because I used two amps. Still, advances were made and without invoking any DSP yet.

Aside from the bass seeming marginally leaner, tonally little changed. The bass impression was caused by even greater control and articulation plus dynamic gains even if my woofers still weren't on as short a leash as they are with my Musical Fidelity M8 700m. But that's not everybody's sonic cuppa tea and with leaner speakers can actually sound overdamped. Even two Ascendos avoided that effect though mono bass felt just a tad drier than stereo bass. Monaural employ actually upped resolution across the board and previously compact stage width grew more generous. This benefitted the effects on Radiohead's "Everything in its right place" from Kid A which liberated noticeably better from the speaker edges. Already a forté in stereo mode, three-dimensional relief improved further. But that still wasn't the end of it.

Screen shot of Ascendo's Unos Creator software where adjustments are made which are then stored in the amp's DSP.

Room/speaker correction. First off, this extra functionality costs nothing extra. All the necessary measurements will be conducted by your dealer. In my case, Stefan Köpf stood in and measured my big Blumenhofer Genuin FS1 MkII two-ways with biwire terminals (bass/mid-treble). Without geeking out over all the details, correction was applied to the amplitude response (a bit more output in the mid and low bass), my channel balance and the phase response at the crossover point to dial in "perfect phase coherence" according to Ascendo. Köpf also increased the crossover slope on Blumenhofer's 16-incher. He wanted to minimize overlap with the upper driver. This type manipulation obviously can't be done with a DSP plugin at the source like Audiodata's AudioVolver or the Abacus AroioSU with EQ module. It relies on discrete amplifiers for the frequency bands one wants to affect.