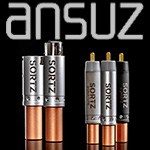 Sort yerself out. Get lost. Yes! Ansuz Sortz mean to sort us out by saying "get lost" to ultrasonic noise. That noise turns the ground and signal connections of unused thus open metal connectors on our gear into aerial ingress points. Someone left the back door open. With today's IT/comm-driven electro smog, invisible devils of hash and haze have proliferated like rabbits on magic mushrooms. We're usually blissfully unaware of our environmental RFI. That's because its effect—the noise itself occurs vastly beyond our human bandwidth so isn't audible—only registers when we minimize it. Then we notice an absence of whitishness, grain and fogginess. Housing two tiny transformers in counter phase plus Tesla coils and a central zirconium bar, Sortz plugs cancel common-mode noise between the ground and signal legs. It's not wrong to think of our stereo's ground as a noise landfill. Our kit (cough!) passes it around like bad weed because this ground is shared. Ansuz offer their ultrasonic noise-attenuating plugs for RCA, male/female XLR, RJ45 and USB. We'd not expect the Ansuz name on tin barrels of course. The two pricier aluminium Sortz even add proprietary particle-accelerator treatments. They grow thin skins of specific compounds which in other Ansuz products claim resonance-attenuating properties. The molecular outer layers vary with performance tier. Their different coloring shows above. Regardless, all Sortz are purified by cryogenics. Those are performed in the company's on-site immersion tank. Audio Group Denmark are heavily invested in not just personnel now 50 strong but technology.

Thinking folks realize how these small gizmos are a clever way to bolt on proven Ansuz tech to components by other brands. That won't involve big external ground boxes and messy ground leads to each component. Keeping it simple and compact was just the thing I had in mind. I'd been schooled in invisibility with my trifecta of Aavik DACs crammed into a single review. That had reported on good/better/best tiers caused by dissimilar amounts of built-in hence invisible Ansuz noise-cancellation tech (plus a copper liner and Titanium brace for the €20'000 flagship converter). To me it proved unequivocally the Danes' advanced skills at carving out sonic advances with active noise suppression plus resonance control. While nothing they do goes Dutch so on the cheap, I wondered whether I might strap on a small Ansuz turbo for relatively little. I actually hadn't the faintest what pricing was to get a potato-eating Irishman sorted. Of course I take wild Irish salmon and baby greens with that. Don't believe for a moment that we're slumming it. Still, for our domestic wallet much of the Aalborg diet is too rich. That doesn't prevent me from sampling any of it in reviews – only keeping it. Might those tides finally turn? Looking at the calm Shannon river fronting our digs which earlier Viking long boats had followed upstream to raid the island, I imagined peaceful promise. The following day my factory contact Morten would walk me through the price options with hopefully little berserker blood spilled. Incidentally, the UK's Chord Company GroundAray plugs too aim at open connectors and for the same reason but the technical explanations for how they operate differ. 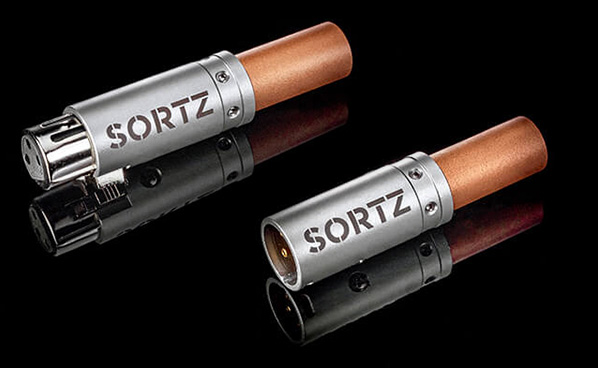 Meanwhile Morten suggested one Sortz level each. I accepted. Their ask is €680, €1'000 and €1'400. The models are Sortz, Sortz Supreme, Sortz Signature. The price/size ratio seems admittedly marginalized. But on the euro/watts score, flea-power SET fanciers have long realized how primitive math can badly miss the point. It's time and more time spent in the local university's particle accelerator which adds itself to the base barrel's price tag. If we stick to Sortz, just Sortz, we can do a 2-for-1 over a single Signature. And to get our nomenclature polished, these devices are anti aerial resonance coils. Sudden images of heroic bomber pilots flashed across my mind. I never understood why it's a dog fight in the air but a cat fight on the ground. Having rained serious cats and dogs just the night prior, I was confused. Still I was dead certain. My Sortz arrival would straighten me out pronto. Audio Group Denmark have perfected the art of the upsell like few others. Their tiered demos always prove the point that with them, spending more gets us more. I'd been in Aalborg and done that. I'd done it in our own digs. For a rerun, I'd now have three RCA units to compare the effects on the same jack. Morten could ship straight away. Soon I'd know how much boost they could bolt onto our systems. Noise out, better sound in? Send invoice? My Aquarian birthday was coming up.

With Morten sorting dispatch, I booked a call with Michael Børresen. I wanted the lowdown on the down low. Since I labored under the assumption that the material gilding of the particle accelerator falls into the general resonance control category, I was curious how that factors with 'noise-shorting' plugs in a component's RCA jacks. I also was curious where, having three on hand, Michael would use them: spread out across source, preamp and amp? All on one component instead? If so, which?

Meanwhile CNN published this report opening with "Americans may be feeling uneasy about the economy but if sales of ultra-luxury cars are any indication, the super rich are doing just fine. Both Rolls-Royce and Bentley posted record sales in 2021. Last year Rolls-Royce delivered 5'586 cars around the world, the most cars Rolls-Royce has ever sold in one year in its 117-year history. Bentley also set a record, selling 14'659 cars and SUVs last year. That was an increase of 31% over the year before. In raw numbers, sales figures this small would be a sign of abject failure for a mainstream brand or even for most luxury car brands. But for automakers that offer products like the $455'000 Rolls-Royce Phantom or $200'000 Bentley Flying Spur, the more than 20'000 cars combined represent historic success. But the sales bonanza isn't limited to those who offer plush cushy rides. Lamborghini hasn't reported its annual sales for 2021 yet but in a December interview CEO Stephan Winkelmann said sales were on track for a banner year. "This year is already higher than the best year ever," he said." In that picture, a Sortz isn't even a hub cap. It's a fancy air-valve cap. Those caps do nothing for a car's ride, just look cool. Yet the Sortz put us on definite sonic notice. About which…