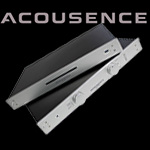 This review first appeared in April 2022 on fairaudio.de. By request of the manufacturer and permission of the author, it is hereby syndicated from the German original to reach a broader English audience. Ed.

Are you a tone studio pro; or perhaps a big classical freak, ideally with a subscription to the Duisburg Philharmonic? Then you'll have heard of Acousence. If not, your time has come. Launched as a music label in 2002, the firm has since made a name for itself with studio and high-end hifi gear. They're headquartered in Wöllstein of Rhineland-Palatinate, a 4'500-head community at the gates of famous spa town Bad Kreuznach where the way of life clocks to a different time than in the big cities. During our meet, Acousence boss and studio engineer Ralf Koschnicke thus proved to be a relaxed and most congenial host. Sampling his recordings, I was invariably impressed by their precision, tonal rightness and exceptional musicality. Now you'd expect encounters of the 4th kind when software and hardware from the same house meet. Hello Mu-Se and DAC-Pre Reference, their currently best audiophile server/DAC combo for a combined €13'575 sticker including preamp functionality.

Let's take a closer look at our Teutonic duo. Both dress down in a simple stamped steel chassis Koschnicke finds great against HF radiation and with clean aluminium fronts in silver or black. The shielding's effectiveness isn't diminished by the lateral perforations which keep internal temps at bay. Solid footers guarantee no-fuss placement and yes, these two may be stacked. At least in the photos that looks quite chic. If you've got the space, also try to separate them to chase those potential two or three extra percentage points. You know the drill.

The €6'245 Mu-Se (music server) handles cloud and locally hosted files, integrates Tidal, Qobuz, YouTube and AirPlay. The slot drive rips CD to the onboard 4TB SSD. Playback of discs isn't possible. If you just mean to stream not serve, get the €5'180 'ST' version to subtract the transport and solid-state drive. The front is simplicity itself, with a standby switch far left—the power mains with IEC is in the back—the Teac slot loader in the middle and a USB 3.0 port at right to play USB media or execute external backups. On the business end sit 2 x USB 2.0, RJ45 LAN, a service port and the proprietary Arfi-optical connection for the stablemate DAC. My tester also had the €490 optional digital outputs to interface via AES/EBU and BNC with converters by other makers.

The DAC's front-row attraction is obviously its converter section, a Delta-Sigma affair which Koschnicke explains has dominated professional machines for already years. He is convinced that no other approach can equal it. He favors a quad of Burr-Brown PCM1794 which nets eight channels to not only increase resolution but useful dynamic range. That clocks €7'300. The non-Reference version makes do with just two PCM1794 to get €6'210. It also subtracts the analog input. Common to either version are two digital input boards, one for the Arfi-optical connection, the other configurable for XLR, RCA, BNC or Toslink. Such modularity means that a standard DAC can be upgraded to Reference after the fact which books €1'624 for the surgery.