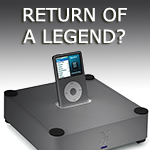 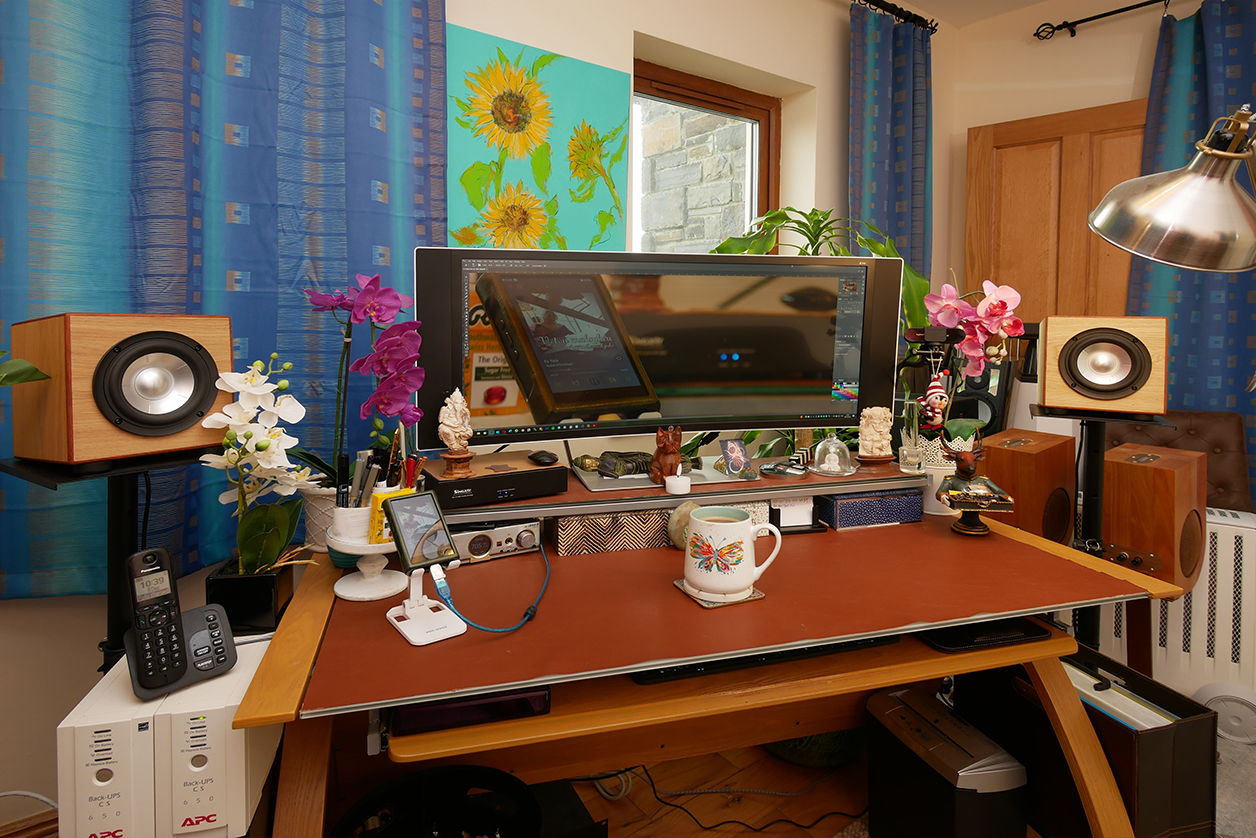 In dog years it's a lifetime ago. It's when Steve Jobs's iPod first met Wadia's dock to extract a digital signal and skip Apple's D/A converter and analog output stage. In one small step, it rewrote sonic expectations from a portable player for the masses. Its sound quality now was in Wadia's hands so with the era's biggest name in high-end digital. In those days of 160GB storage, thousands of lossy files were the intended bed fellas. Audiophiles then educated the Barbarian hordes to save their files in at least .alac to tap CD quality. Fast forward to 2022. Amazon sell a 1TB SanDisk Ultra microSD card for £109. Stick that to Shanling's new €469 M3 Ultra. Welcome today's überPod. Say nein Danke to a dock. Tap digital files up to 32/384kHz directly. Mollycoddle them in a fancy USB DAC of your choice. Carry then plug'n'play in a second or third system. To take your world with you, step out with 3.5mm headfi. 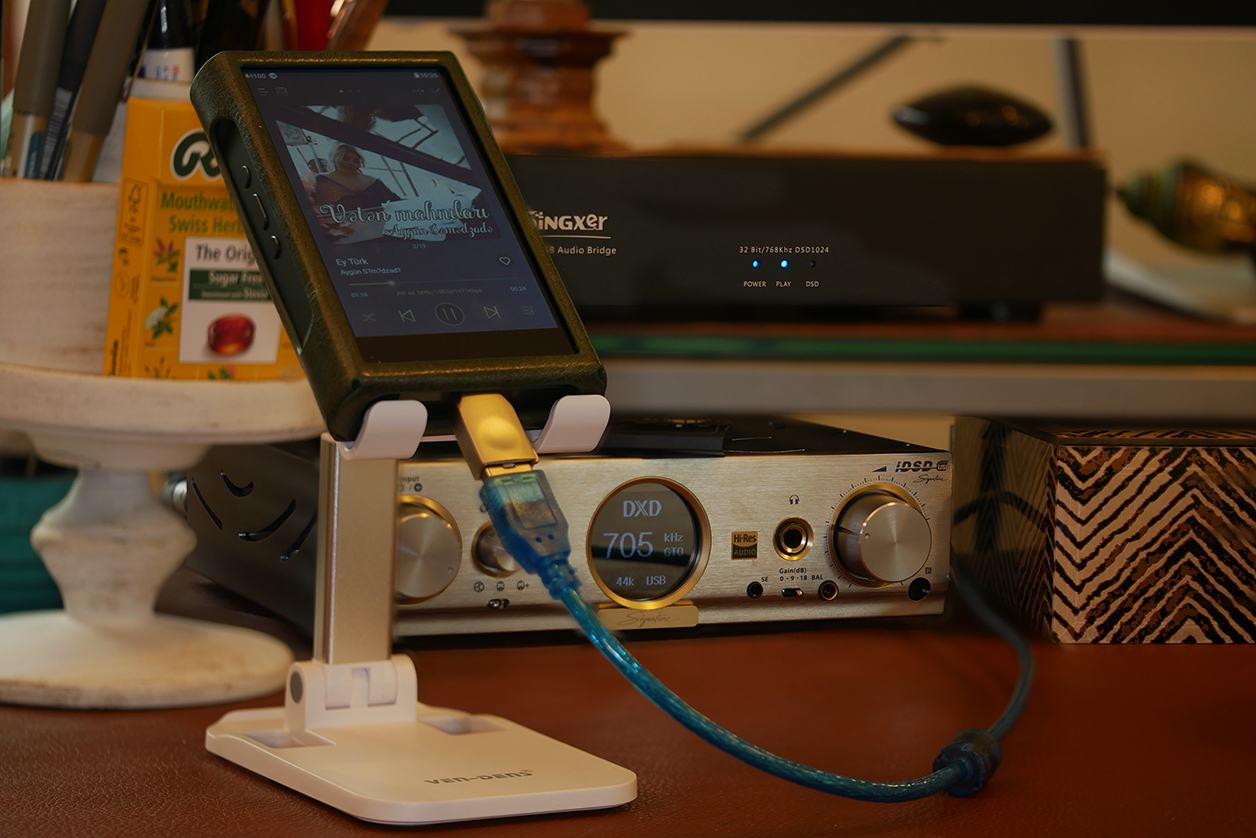 This isn't a review. That's still coming. Two up in fact. Today's about the component type this latest Shanling represents. It's a Dapper Dan aka digital audio player. They come in numerous sizes and specs primarily aimed at GoFi to drive headphones. Bigger bulkier types may include full-size coaxial and analog line outputs to romance His Stationary Lordship. Costlier types also bulk up on go juice by way of bigger batteries and higher output voltages/current. But already a budgeteer like the M3 Ultra will deadlift a full-size Meze 109 Pro at 35 on the high-gain dial. It leaves plenty of extra sauce in the tube should you squeeze harder and really rumble your ears.

As a WiFi allergic whose brain responds to such microwaves with headaches, the marginal streaming our household does hardwires to our fiber-optic router then accesses Spotify, YouTube and a Qobuz Sublime subscription. Whilst all modern DAP are streamers of varying proficiency—this Shanling too does both WiFi and Bluetooth—those functions are of no interest to us. Instead we ogle the microSD slot and USB-C-to-DAC output. We want full cover art support, an intuitive GUI to navigate/search by all common parameters, easy playlist generation and sufficient battery life to last a whole day acting as front man for a desktop or smaller system. I bought a 2m custom leash from Polish specialist Mateusz Przychodzien long enough to service my upstairs Soundaware D300Ref super-cap powered USB bridge. As on my desktop, the DAP sits on this generic smartphone stand, that on a small side table right next to the listening chair. The M3 Ultra sends USB to the bridge which reclocks then forwards the data via I²S over 6-meter HDMI to a Denafrips Terminator Plus on the front wall. Since I can't be in two places at once, it's no bother to carry stand and player into the downstairs office during the day then back into the bedroom system in the evening. On the desktop, the Shanling plugs straight into the DAC's USB port. Hardwired cloud streaming happens via Win10/64 workstation down an iFi Mercury3.0 cable into an iFi Purifier into this Singxer SU-2 bridge. That finally feeds the iFi converter via BNC. One DAC, one input selector, two hardwired streaming sources. 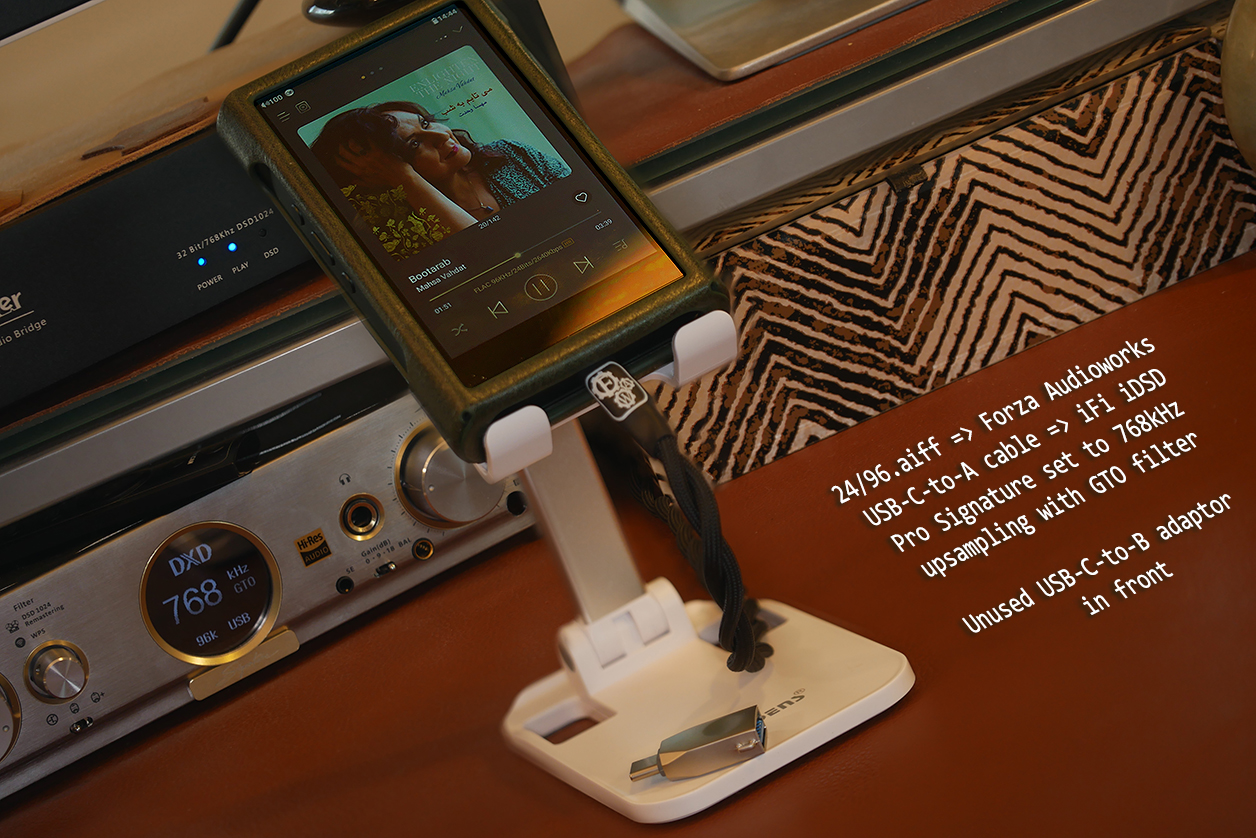 Because this particular focus puts the lowest drain on the DAP battery—defeating the display is more good bat-miser MO—and doesn't use wireless streaming nor runs bonkers cans at bonkers levels, the place to shop is with the entry-level models of DAP catalogues. Greater headfi drive, snazzier DAC chips, sub-miniature tubes or more universal support for streaming clients are all redundant. We do not want to pay for either. We just want to resurrect a present-day iPod dock then dock the dock. We want a compact low-cost digital file transport. We're not worried about max storage since our local library lives on a separate 3TB drive. We simply drag'n'drop enough tunes on a good-size card to last us for a stretch. Later we rinse and repeat with other files; or populate new cards to play swingers. This page thus is simple notice how something like Shanling's latest DAP serves that purpose. Its processor is quick, its interface perfectly intuitive to anyone with a smartphone. The display is highly resolving. WiFi and Bluetooth defeat in the menu. Big Brother can't track our listening habits. No self-generated UF radiation can leech our brains. Neither does our undocked iPudding rely on an Internet connection. For the right user, a €469 modern iPod plus ~€100 high-capacity microSD card could be super-legit kit that won't bleed Piggy the Banker? If you hadn't considered a DAP fit for purpose, perhaps give it another think? If so, mission accomplished. Self destruct in 10 seconds…