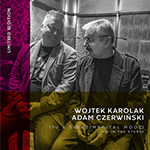 In a sentimental mood

The absolute fun part of visiting an audio show is not just meeting new like-minded people. It's discovering new music. There's so much of it 'out there' but how to meet it? In the olden days we had pirate radio stations. Those often played wicked music without any control from record companies to simply explore the musical tastes of a DJ working under a nome du guerre. Pirate radio stations were illegal and one's own enjoyment didn't override that harsh fact.

At the 2019 Warsaw show we entered a room whose Tascam open-reel deck was its pièce the resistance. Well, the visible piece. Aurally there was more and it was a Hammond B3 that first announced itself. Next a very live a drum kit entered which we really enjoyed. Once we learnt that the album was available on vinyl, we and the record were sold. Back home we dug into this live-in-the-studio affair called In a sentimental Mood featuring Polish jazz legends Wojtek Karolak on organ, Adam Czerwinski on drums, Tomak Grzegorski on tenor sax, Robert Majewski on flügelhorn and Marcin Wadolowski on guitars. This limited 500-piece edition on heavy pristine vinyl pressed by DMS in Plymouth again had the same effect on us as it did in Warsaw. Eight tracks alternate Duke Ellington and Sonny Rollins standards with Polish originals. This combo makes for interest throughout to transcend yet another standards collection.

The actual recording was made in Gdansk while the equipment was a selection of the finest all-analog gear still kicking. Such productions create exciting timing and tuning. From Gdansk the master tapes shipped to Abbey Road where not only mastering but DMM copper cutting took place which led to high-quality pressings. Bravo for a true audiophile recording that's not just the sonic goods but of truly fine music which happens to be recorded as it should, mastered as it should and pressed as it should. ACRECORDS.PL ACR 009. M&H