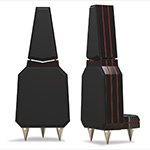 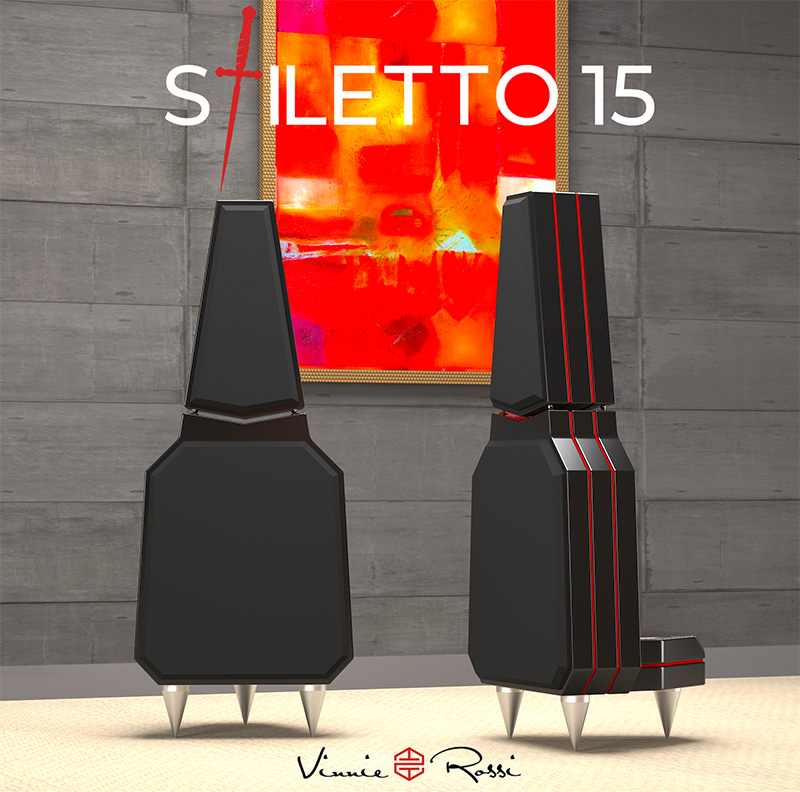 Enter Stiletto 15, the first in what could become a range of three with a smaller 12-incher below and a mega 18er above. That'll primarily hinge on market response.

Let's inspect the goods behind the little black dress.

Next is ScanSpeak's 15M/4531K00 Revelator mid, a 110mm paper-cone unit with a resonance frequency of 35Hz and the firm's signature diagonal slashes.

Both of these drive units are loaded into a sealed cabinet which rides astride the open-baffle thus Dipole 15 Acoustic Elegance woofer with underhung Lambda motor and full copper Faraday sleeve.

"Aside from a very small rise above 15kHz which most of us won't even hear as a rise, the response is pretty much flat ±1dB. And because this tweeter is good to 40kHz, no super tweeter is needed.

"At 2m, these sing on a clean 25wpc. If you want them to slam, they certainly can with the 75 watts of our L2 monos. Okay, into 6Ω those do more like 107 watts each. That woofer's 15mm Xmax and Lambda motor are pretty awesome. Of course open baffle slam is not quite as stiff as box bass but its enhanced speed and articulation are so much better to my ears and integrate with rooms far better.

"As with our L2 DHT preamp without input or driver tubes, without coupling caps or output transformers, I'm pretty certain there's nothing quite like Stiletto 15 out there. It images like the best mini monitors but plays with far more impact and confidence. It's also much more room friendly than most because you don't get the room issues of typical box bass nor the full open-baffle issues with the midrange coming out of the back of the speaker. It's definitively not a 'sound FX' design. It just makes music which sounds like it's all comes from one clear voice even though it is a three-way."

Stiletto 15 is a passive speaker with Mundorf M-resist Supreme resistors, Jantzen air-core and c-core inductors and film capacitors to avoid all electrolytics. The terminals are WBT NectGen 0703Cu.

The cabinet and baffle are a sandwich affair of 3 x 2" high-density composite layers plus 2 x 0.375" solid-surface intermediate layers bonded and bolted together. The grills are magnetic and the massive aluminium footers are standard. Free-space bandwidth at ±3dB is 39Hz to 40kHz with 87dB sensitivity. Each Stiletto 15 weighs in at 100lbs and scales to 122cm tall by 48cm wide. Depth with the plinth is 41cm, 18cm without.

And there you thought the devil ran out of letters past L2. But the devil has many options especially at 'S'. There's sexy. There's sinful. There's Stiletto 15.

And you just know what he'll say next.