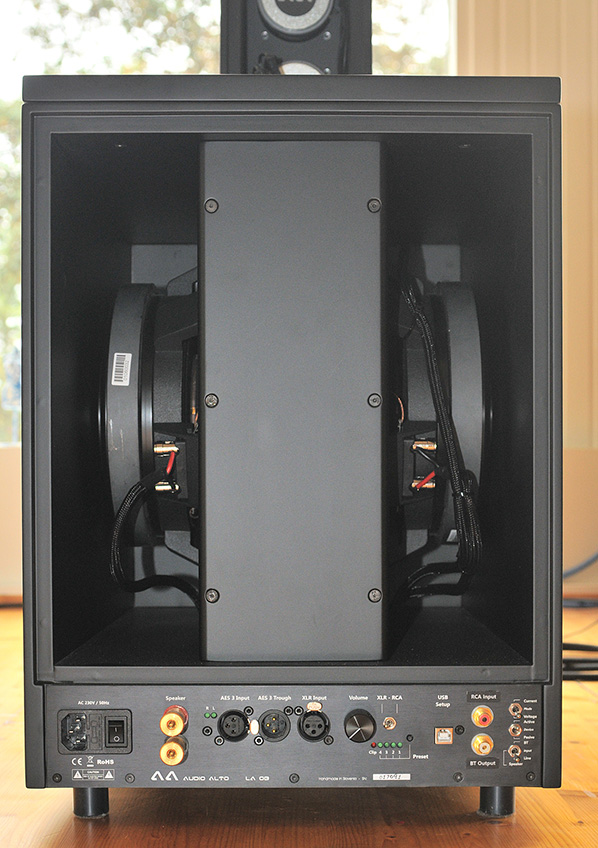 Another man with guitar was Neil Young on Tuscaloose. This 1973 effort is very different from his more recent releases. Here he plays with his Stray Gators band at the University of Alabama in the era of the Harvest and After the Goldrush songs.

It's a bit of a Best Of Live affair but not bad at all. If you are even just a bit into Neil Young, you appreciate the off-key glitches and distortion from the stage. Played over the LA17 PA, the sound was enticing, asking us to dial up the volume and then some more.

Father and son Pedro Soler and Gasper Claus on acoustic guitar and cello respectively feature on Al Viento, a favorite disc at our place. Playing this with a 300B amplifier warms up the sound a little especially in the tonality of large stringed instruments like cello and upright bass. The 24/88.2 version we played from Qobuz sounded a bit clearer compared to the vinyl version where additional tubes were in the signal path.

Vinyl came with Erik Satie's Monotones, a 1979 recording with the Orchestra of the Royal Opera House in Covent Garden under conductor John Lanchbery. As a large orchestral ballet score, playing this over the curved arrays with subwoofers enveloped us more than other recordings had thus far.

This had to be due to the recording technique and a few well-placed microphones in and over the orchestra. We were able to hear deep into the symphonic forces where the percussion section resided. Micro details even in crescendos during "Manière de Commencement" didn't overload but remained intact to add to the effect of being there.

The inequity of loud brasses and more timid Hammond with Lesley amplification here are musically compensated. When the organ comes in, the band takes the foot off the pedal and gently forms a layer beneath it. When the organs stops, the band bashes it out again. Loud and wide is what we got and it was hard not to start tapping our feet.

More organ came from the hands of Mike Ratledge of Soft Machine on Third, a legendary underground double album from 1970. Our sample had seen some rough times and no longer was spotless yet still triggered memories from listening to it back then.

The music is what was called jazz fusion and the band explored that territory after working in the more psychedelic arena before. At the time this kind of music was definitely an acquired taste. Think organ distorted by a fuzz box, tape loops and backward replays. But when in the mood for a '70s refill, this is still great stuff.

The way the LA17 PA handled all kinds of music so far outclassed most box speakers we had heard. Just as with our Soltanus Virtuoso ESL panels, the curved arrays had an enormous directness of sound projection.

Sounds showed up at the listening position instantly, coming seemingly out of nowhere with real impact. Brasses were sudden, loud and had that typical edge during fortissimo bursts but in more relaxed passages turned smooth and warm. Compared to our Avantgarde spherical horns with a bit more of a front-row effect, these line sources had wider dispersion and built up the panorama from a larger distance to add more venue information.

So far we had listened in passive mode via the Audio Note Meishu. Time to go fully active. For that we swapped out the Meishu for the Music First Audio Passive Magnetic preamp to enjoy multiple inputs. From there we used a balanced connection to the LA17 PA which was set up for full active use with its volume knobs fully open since the transformer-attenuating passive would control the volume now.