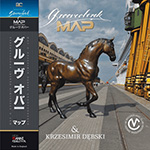 After acquiring In a Sentimental Mood, we were gifted with another ACrecords called Grooveberek, of the MAP trio playing with Krzesimir Debski. The MAP are Marcin Wadollowski on guitars, Adam Czerwinski on drums and Piotr Lemanczyk on bass. Guest Krzesimir Debski took care of violin, Fender piano and some vocals. After In a Sentimental Mood, our hopes were high to hear another interesting plus well recorded, mastered and pressed outing. Again the recording studio was in Gdansk, the mastering from Abbey Road Studios and the pressing on 180-gram vinyl. Alas, our disillusion couldn't have been greater playing this back at home. No matter how carefully made, processed and pressed, we cannot stand a recording that has one of its participants play out of tune. Mind you, that's not just one off-pitch note to remind us that it's not robots but humans playing. It's on every track where this player figures. The guilty party here was violinist Krzesimir who in our opinion makes the album unbearable to listen to. How could this have slipped through the cracks? M&H

Marja & Henk forwarded me one track for a second opinion. I heard the same. It reminded me of a Gary Karr track where the bassist plays some Albioni or Pachebel. It's been a staple of audio show demos. Each time I hear it, I bolt from the room. The man is so sorrily out of tune. Yet everyone else sits there transfixed in their seats following poor musicianship. Apparently pitch sensitivity between listeners varies widely.