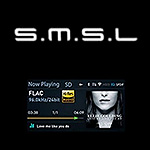 SD, 9th heaven? With the Kilrush move behind us and the new digs sorted, my wife's studio hiccupped—or rather, downed—when she tried to play her vintage 160GB iPod in its digital dock. That's how she got signal into her Fram Audio Midi120 actives just fine before the move. But now the iPod froze. Ice Age. Scanning my memory banks, I had a hazy thaw on how to reboot it. After a few misses of holding the wrong two buttons, I eventually managed. Joy. But it proved short-lived. Clearly Mister iPod had to join the neighbor's four horses and assorted cows out on their shared pasture. Thinking on what to replace it with, I hit up pro-audio sites for DJ equipment. Ivette also likes to spin the occasional CD. DJ decks combine both functionalities for a song. Alas, the on-song stuff I found with a coax out wouldn't do files beyond MP3. I certainly remembered the $699 Soundaware A1X but couldn't find one EU reseller for it. Ditto the QLS whose own website wouldn't load. Was there no other SD transport for little cash that handled the whole audiophile litany of file formats and resolutions and was available inside the EU from a proper hifi reseller not the almighty Amazon and its various tributaries?

That's when I chanced upon the SMSL SD-9 with micro SD card playback up to 256GB. WiFi and Bluetooth feature too as befits a modern network player but both can and would be turned off since our application doesn't call for them. It even spits out two flavas of I³S over HDMI though to guarantee a proper DAC shake would take 48 to handle all possible pin configs. Vitally, this deck includes no DAC. Ivette's active speakers have their own since they run on custom DSP code. They just want to nibble on raw S/PDIF, not cooked analog which then needs to be refrozen to digital before getting cooked again. Too many chefs in the kitchen. Also, this machine supports all going files formats/rates and said hello on a French hifi site. If you're of my mind set, sidestepping ordering from Shenzen or some other Chinese website of untested customer support has an advantage. Not everyone is as ace as Alvin Chee of Vinshine Audio. What's more, former contributor Glen had reviewed two SMSL machines and found much to like.

Now you know what I stumbled upon when my fingers did the walking on an overcast Sunday. Will I get one of these for €424 delivered to Eire? You'll know when one shows up in the review queue. Or not. On paper and in the owner's manual, all seemed to check out for our particular purposes. Really, those are as just basic SD card file reader outputting digital over coax whilst offering a proper OS/display to navigate a card's file folders via IR remote. You'd think that should be easy to do. But given the scarcity of this particular feature set, it's really not. I did find the Aune X5S but it lacks .aiff support, does include a DAC then has a far more basic display.