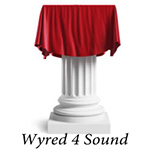 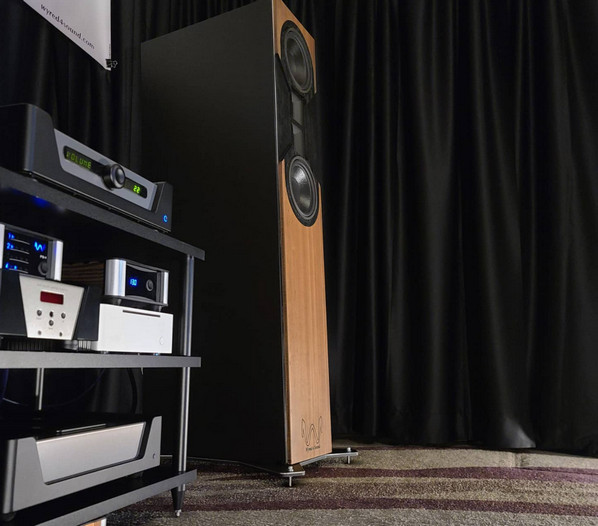 June 20th. "These speakers I've worked on mainly for shows where we were always in the shadows. If we showed with a cheap speaker to make it sound really good, it would be praised as a great speaker value. If we made an expensive speaker sound excellent, we should have done due to its expense. If a speaker sounded bad, it obviously had to be our electronics. Couldn't win.

"At any rate, we wanted something with fullness, something you can turn up without cringing which can also show off how delicate and transparent our gear is. I'm in love with the latest version. I would still like to make a few cosmetic changes but it's already much better than the last and very attractive in real life.

"The Aura preamp is wonderful. Versus the STP I did have to start all over with the circuit but feel that the standard version now is a notch above the best STP SE II. To match it we have the new 200wpc GaNFet amp just about ready for prime time. I hope to rattle a few cages because some of the gear out there is getting priced out of all control."

That was EJ Sarmento of Wyred4Sound in the wake of 2021's first post pandemic hifi event in the US. "We were so busy before that when the show suddenly was a go, we built the amp, preamp and speakers from scratch in just two weeks."

As Stereophile's Jason Serinus put it who covered T.H.E. Show, "what stood out the most for me was Wyred4Sound's consistent low prices for equipment with the potential to sound really good."

Even where reviewers are utterly sincere in their admiration, readers still imagine damnation by faint praise. That dials down genuine excitement into "good for the price". It hits a virtual mute switch. Without spelling it out to not look like economy fascists, they really mean "it's fine if that's all you can afford". Also going unsaid is that "you haven't a clue what you're missing". It's always lovely when strangers are so concerned with our hifi welfare. It's why in these strata, brands like Wyred can't win. By not playing Blingo, their credit rating is bad on the perception index. That extends to reviewers. I've used the STP II for years and still do. More than one reader over the years suggested that I'm missing out big by clinging to my budget choices. But what if one also reviews gear at x 10 the price and still feels zero Jones to live there? Perhaps not all such decisions are about equating disposable income with status but instead factor in actual performance at the ear? Perhaps solid exposure over 20 years taught lessons which no longer equate Blingo with winning and tiger's blood? Plus, not all reviewers feel temperamentally called to the bleeding edge as Jonathan Valin or Roy Gregory enjoy. In any event, this intro has worked its way toward the actual hardware under review.

Given STP SE II ownership, I was keen to learn how much farther EJ had ventured with the Aura preamp. But I was just as curious about the amp. I had crossed rosy paths with two prior class D GaN amps. One was the $15K Merrill Audio Element 114 stereo amp, the other the $15K/pr AGD Productions Vivace monos. Both had performed perfectly on par with my then favorite DC-coupled wide bandwidth class AB monos, the €8'500/pr LinnenberG Liszt monos since upgraded to Kinki Studio's €3'500/pr EX-B7 monoblocks. I already knew that backed by SMPS, gallium-nitride Fets which Alberto Guerra switches at 768kHz can sound virtually indistinguishable from premium traditional amps with linear supplies.

What could EJ do at 1/5th the highway tax?