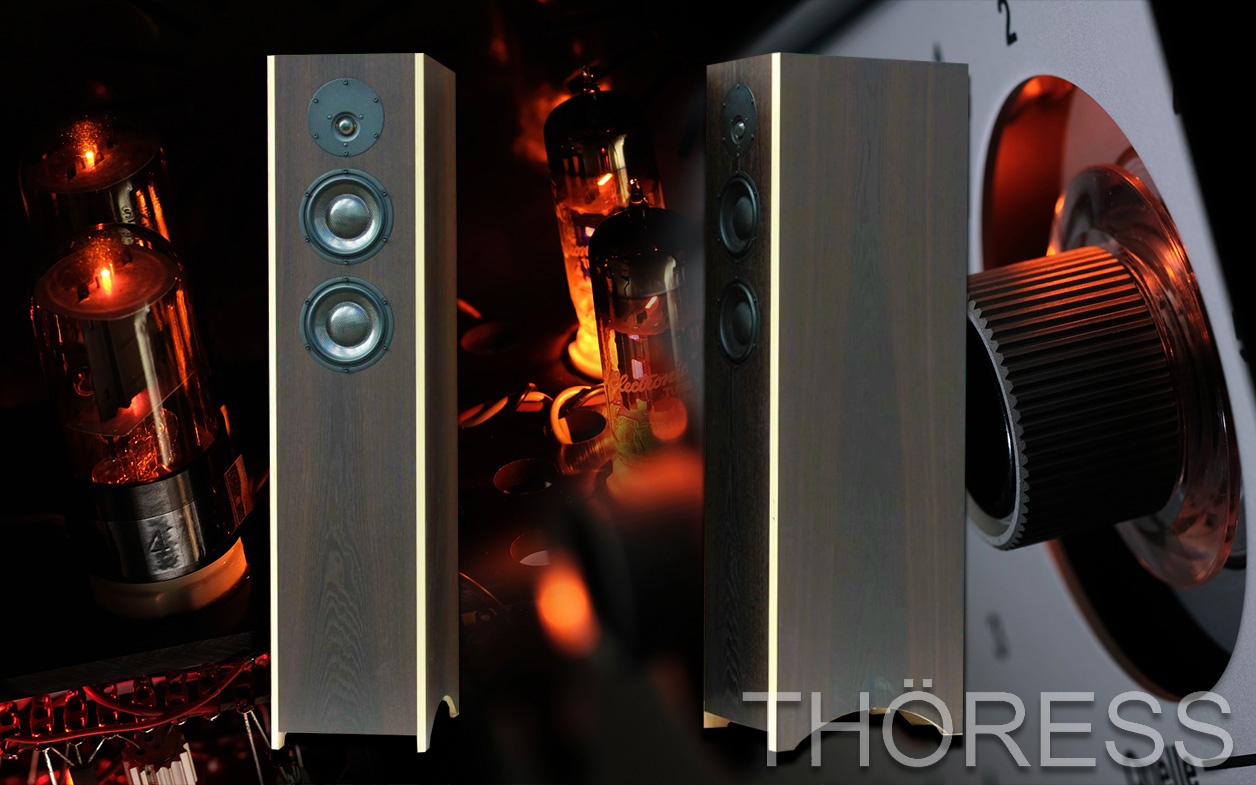 Speakers, not just electronics! If you're Reinhard Thöress from Germany's city of Aachen, that's what you want people to know. It's because you do both yet most only know you for valve gear. Today's Loudspeaker 4 aka 1D66 launched at the HighEnd Munich 2018 show. It replaced his prior small-room model, the Loudspeaker 1. It looks like an apparently conventional 3-driver two-way of 92dB/W/m sensitivity which measures a svelte 1.17m tall by 23x41cm WxD. "It's an ultimate speaker which easily measures up to the highest of expectations especially when driven by our EHT monos or integrated EHT amplifier. In view of its medium efficiency and tame impedance, the 1D66 will also achieve fantastic sound with an all-tube amplifier of reasonable power like our SE845 monos."

While Reinhard is first to admit that it seems ordinary, there's naturally more to his box than meets the eye. First, its drivers including the tweeter use underhung motors. This insures that, criminal abuse excepted, no voice coil ever peeks out from its magnetic gap to remain under full flux control regardless of excursion. A famous vintage driver of this superior motor geometry is JBL's 1500AI woofer. In today's speaker, two paralleled 6-inch carbon/rohacell mid/woofers combine with an Israeli 1" Acuflex tweeter in an open-bottom cab so load neither sealed nor ported. This uncommon solution—we've seen it before from Ocellia—is closer to a "folded open baffle". Reinhard's building material is Poplar Ply for its low mass so it stores less energy than high-mass behemoths. That means each just weighs 14kg! The panels dress in dark brown oak veneer for a lounge-friendly look. The point-to-point crossover sits in a potted non-magnetic die-cast casing to avoid any exposure to even milder air-pressure variations. The filter is a conventional 24dB/oct. 4th-order Linkwitz/Riley. For his drivers, Reinhard claims exceptional dispersion and finds them among the best made, period.

Here is his Morel SCM 634 mid/woofer with 3" underhung voice coil, neodymium/ferrite hybrid motor, cast aluminium basket, 0.12Ω voice-coil inductance, 14.5g of moving mass, 49Hz resonant frequency and ±5.25mm Xmax. These are serious transducers. I once heard an inspired-by Taiwanese lookalike with Curv not carbon/rohacell cone in Albedo Audio's Amira two-way floorstander. For each real Morel, Parts Express want $375 whilst MadiSound get $275 for one of the above ST1308 tweeters. If you shop at retail, that's $2'050 just for this speaker's driver complement. Phew. Incidentally, another designer very keen on cones with carbon-fiber skins surrounding a foam core is Denmark's Michael Børresen, ex Raidho now Aavik, Ansuz and Børresen Acoustics. He too designs his mid/woofer and woofer diaphragms around the same concept.

Meanwhile Reinhard's bottomless enclosure swallows up the build-up of internal air pressure like a bottomless pit. That also avoids to asymmetrically load its driver membranes. Traditionally, internal box pressure is far higher than in-room pressure. Here it should be more similar. Another benefit are minimized internal reflections which otherwise trap inside a box to partially exit through the driver diaphragms back out into the room delayed in time. And of course paralleling two 6-inch mid/woofers matches the cone surface of an 8.5" driver but halves the excursion requirements whilst applying two motors to the task not one.