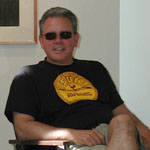 Stephæn's first review for 6moons was on the Harmonix RTA 78i tuning system. He now reports from the front lines of the audiophile jungle – reviewer bias. What does he listen for? What's important to him? For anyone following his future reviews (here or elsewhere), this is and will remain a pertinent piece of short writing. What if you're not a habitual audio magazine follower and stumbled upon this by chance? Bollocks to you. Not reading reviews is probably better for your sanity. Still, you may feel inspired – to consider your personal listening priorities and how they're reflected in your system. Your focussing habits. The qualities you go after. Your music selection. The writers you would relate to. Those you wouldn't. And why.

Would Stephæn's report pass certification inspection with the USDA (United States Department of Audio)? I'm not sure. He listens to all the wrong things: Single-driver hornspeakers; low-power SET; subdued volume levels; grannies playing live accordion. Everything the audio police frown on. Which of course makes him prime 6moons material. The licensing/reviewing board for professional audio writers doesn't really exist. Perhaps it should. Fantasizing about the kind of havoc it might wreck amongst the current establishment could be a fun exercise for a rainy afternoon. For now, reports such as Stephæn's candid self-declaration — when joined to his actual hardware reviews — are the most important and only pointers that tell you what you need to know to put a writer's findings into perspective. Distrust those who hide behind a mask of objectivism and neutrality. Music's all about passion. And since when has passion been neutral and impersonal?

Heart inspection. As Stephæn describes, listening to music is a very personal affair. Everyone's different. From the perspective of 6moons.com's unpublished and unofficial reviewer guidelines, Harrell clearly makes our top pppp grade. That doesn't stand for pianissimo so faint you can't hear nuttin'. It also doesn't stand for prime pink polluted prawns as it might if it truly was USDA issue. No, it stands for Passion, Personality & Powerful Pen, the four most vital ingredients an audio reviewer must possess to create meaningful writing. That is, according to this publisher's opinion which you are heartily encouraged to disagree with. But without wearing your heart on your sleeve for everyone to see — quite scary really if you're a very private person — how would you ever know where a writer's true loyalties lie? Kudos to Harrell for showing us his!

If you aren't quite noticing or accepting what is really going on in the present, but are responding based on your thoughts or feelings about what ought to be, then you are apt to collide with what is really going on. Confession: I gave up on trying to achieve orchestral volumes at home. My latest listening room won't allow for it. Neither would my bride's sanity, which I was utterly convinced she had already lost when she said "I do" (while standing next to me years ago!). And in all honesty, I now prefer to listen at lower volumes than my peers. Much lower. Sometimes when I listen to other systems, I have the experience of being bombarded with levels of blare that leave me wanting – to leave. It was long after dragging home my first system twenty some years ago — NAD 3020 / Micro Seiki 'table / Yamaha NS21000 — that I began to appreciate that louder can be but rarely is better. In fact, fifteen years later, at the height of my hi-fi illness, I was hooked on a 600 wpc solid state amp driving six drivers (per speaker). Nowadays, my 13-watter is the brute among the amplifiers on hand.

Over the last few years, I have found that the difference is akin to going to a show and either being used or being moved: The difference between seeing a performer or listening to a musician. So as to not pick on any luminaries for an example, let me frame a question in this way: Is the person in front of you in love with the attention they are getting – or with the musical message they are channeling? Call me a slow learner. Go ahead. My take on the matter is that the unnecessary volumes I now encounter away from home are sincere efforts to achieve a facsimile of "live-ness". What took me so long to get is that this very "live-ness" is communicated better by qualities other than volume. I'm now happy to require from my music system that, at a reasonable volume level, it channel the musical message encoded on various (preferably black) media.

So when trying out new gear these days, I listen most intently for these basic and critical aspects: Overall tone and rhythm (the essence of the musical message) and dynamic shading and low-level resolution (the elements that communicate "live-ness" without the need for excessive volumes). When nailed, these characteristics conspire to create the level of immediacy — the sense of aliveness and presence — that convinces me I've got something special on my hands. In my ears. Retrieval of ambience is a nice side-benefit of getting these basics right. I'm big on image dimensionality and saturation – but not pinpoint specificity. While I acknowledge that vivid soundstaging can be fun, it doesn't move me emotionally. "Properly extended" frequency extremes are appreciated but not high on my list. Get the tone, rhythm and nuances right and I'm a happy camper. A few months back on a glorious summer day, the Old Time Fiddler's Association weekly jam was at the park. What a great day – cooler than the 100+ temps we'd been sweating over the last few weeks. According to the emcee's regular and scripted introduction, the OTFA is dedicated to the preservation and performance of, you guessed it. They don't take themselves too seriously. The intro is usually followed by a comment like "and when we're done today, you'll wonder why we didn't just let it die."

Where do I sit? So there I was with my bride, her mom Margie and her mom's gentleman friend. Margie's a regular guitar, piano and fiddle player on the OTFA circuit. Together, we were enjoying BBQ pork, corn on the cob, cole slaw and weak coffee while the jam session began to heat up. I distinctly remember being distracted about a writing assignment. It asked us to describe our listening preferences, including where we like to sit when we attend the symphony.

The symphony? Hell, I do that perhaps once a year when I can get to four-hours-away Seattle. It's good. It's great. It's compelling – but truth be told, the music I manage to catch live and unamplified tends to be exactly what's unfolding right in front me, right here, right now. Whether we're at the park or the grange or the senior center, where I sit is never an issue. Laughing, scratching, singing, dancing, appreciating the old-timers and their predominantly peer audience that you may, literally, not see again next month; the gifts they offer, musical or otherwise – these are the things that really matter.

Image specificity and dimensionality? Looking up the stage, I see everything from cowboy hats to baseball caps. I see a freckle-faced 9-year-old fiddle player anxiously awaiting his turn with his dad who, though no virtuoso, sounds darn good on this fine day. I see an 89-year-old guy playing the squeezebox like there may be no tomorrow – and for him there may not be. And I see Swede on the upright bass. He must be over 80. He sucks oxygen out of a canister through tubes leading to his nostrils as he plucks away on an instrument that is half again his size. He grins from ear to ear in the midday sun. Those are images. They're as big as life gets today.

What music do you use as a reference (besides my own Fender Junior)? Well, these good folks play it all. Some of them have been at it for more than 70 years. Others are just learning. Harmonica players lead on songs like "Over the Rainbow", "Danny Boy" and "Please Release Me". Fiddle players duel at breakneck speed on tunes ranging from the traditional "Turkey In The Straw" to the Cajun-inspired "Devil's Nightmare". And if you've never heard "Amazing Grace" belted out on an accordion? Well, believe it or not, but you've just plainly missed out. Is it my kind of music? Well, no – and yes. Aside from some of the more bluegrassy aspects, I wouldn't seek these tunes out on recordings. But right now, it's here, it's live, and it's played by friendly folks who are not — and don't ever want to be — professionals. The music and the participation come first. It's never overshadowed by the need or desire for world-class talent or technique (or gear, for that matter). Sheet music? Uh, yeah, right – I never see any at these gigs. Somebody simply calls out the key of the tune they're gonna lead. The rest come in and play, either by ear or immediate peer coaching. They pass down the traditions as others take an interest. We could all learn a lot from that approach. Those things I can't help but admire. Call me a sucker. A happy sucker. End of rant.