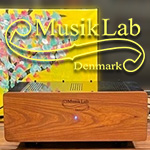 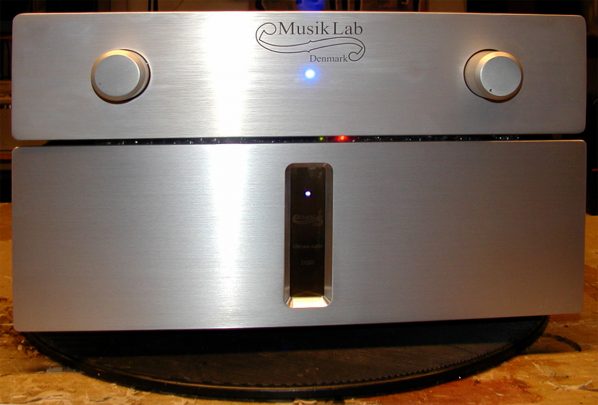 It's all Paul's fault; not the Catholic church mind you but today's gig.

"I enjoyed very much your sonic descriptions in your review of the LinnenberG Audio Händel. I would love to hear those amps and be quite happy to never get the chance as I'd want them. It captures my personal preferences on point and explains why my EXB7 moved on rather quickly. The timing is ironic however. I've been literally entranced for about two weeks now by living with a gem of an amp from Michael Edinger at Denmark's MusikLab. His D220 is the evolution of his original design for GamuT using two high-power Mosfets per channel. Apparently though it looks similar to the last iteration of the GamuT 200i with its top off, not much is the same on the input and power-supply sides.

"Your descriptions of the Händel monos mirror the shift the MusikLab has produced from 100Hz down in my system to a T. A veil lifted in that region with greater microdynamic interplay and more impact but not the drummed-up variety that bleeds into the midrange. True low-frequency resolution and authority at all volumes have reset my landscape. Most unexpected however have been a corresponding midrange and treble. Those are as open, effusive, fleshed-out and unrestrained as I've ever heard from solid state, all staying coherent with a nimble and powerful new bottom-up authority. It speaks with a singular voice carrying all the way up the register. Best I could conjure from an amp we both know would be to imagine an XA25 but more nimble and foundational plus the sense that all the NFB which Nelson had to throw on it to behave has been removed and the midrange and treble are free to express themselves. Then add considerably more headroom. That's the MusikLab D220. A must hear if you ever get a chance and I am guessing it would be a dream on your new beauties from Alain. I believe the D220 is the most complete amp I've yet owned that fits my preferences. It's the eighth single or dual output-transistor amp I've owned—3 Pass, 3 Valvet, 1 Vinnie Rossi—and the best of the lot by a wide margin. The story of Michael Edinger persisting with this circuit for 25 years in obscurity with no credit for his original design for GamuT only adds to the appeal." 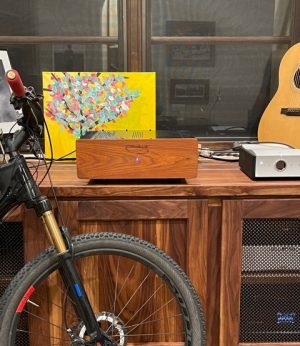 Checking in with Michael by forwarding him this reader email plus a link to the review that prompted it, "now you have my attention. Thank you very much for making my day. Dr Paul bought the wood-front MusikLab D220 whose owner replaced it with a slightly newer D220 in aluminum to match his other gear though performance wise it's 100% identical. I'd read several flattering GamuT reviews of my designs in 6moons going way back, thank you very much. But over the years only one or two magazines actually credited me for the GamuT designs I made as an independent subcontractor from 1993-2005. That includes their D200Mk1-3, C2r, D3, M250, S300, M600 and counting. I stopped working for them in 2005 after finalizing the Di150 integrated design. These days I hand-build short runs of my MusikLab D220 amps, my D1 preamp (5 line pre, balanced i/o like a D3 but made as I find best) and models like the M300 monos to order. I also offer OEM design and product development on a project basis.

"With GamuT's dismal demise, I assist some of the desperate GamuT/SiriuS amp customers who were abandoned by GamuT's new owners. I service their older D200 units, some of which are now up to 25 years old and finally beginning to show it. But certain models can be upgraded to a modern version with two new engines and renewed hope for up to 20 more years of service for a reasonable cost. I'm also aging on a tiny state pension so this makes me just sufficient extra to meet my modest needs. I'm pleased to offer my products and services to your readers who are interested in their qualities." If memory served, Gato Audio's PWR-222 too was inspired by GamuT's amp hence Michael's circuit. Hearing its originator's latest thinking on it felt à propos. Could I review one?

"I'd be honored. It would also be a valuable addition to the word of mouth which I mostly depend on for lack of advertising funds. I'm interested and EU makes things relatively easy too, no customs, 230V also but the toroids are actually dimensioned for UK 240Vac and US 120Vac. I believe I can have a D1/D220 set ready to go some time not far off to spend a working holiday in fair Ireland before heading for its final home. I might finagle a bit of flexible timing to avoid stressing. How's that? A youth-time 1970's Eire visit is still vivid to memory visiting musicians, traversing Dublin to the cliffs of Moher, a lasting inspiration for a life deeply entwined with music, listening, a bit of playing too, musical instrument development and ultimately, a livelihood by combining it all with pro sound and electronics." 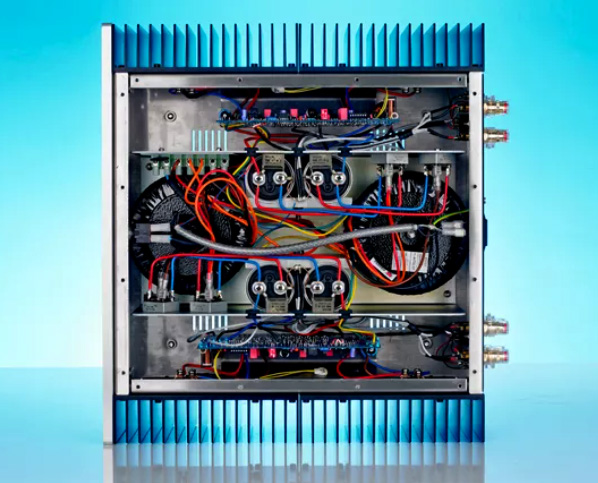 And that's how it happened. St. Paul made me do it. Actually, he's a doctor. In my book that's simply close to sainthood. Back on point, "… the first versions of the amplifiers were designed by Ole Lund Kristensen in the early 1980s and sold mostly in the professional studio market in Denmark. In the early 90s the amplifiers were more widely sold in the home specialty-audio market under the brand Sirius whose name was subsequently sold to the American satellite radio company XM/Sirius in 2000. From then on GamuT has been the brand on the company's products which also includes a CD player and preamp (added by the late 1990s) and three speaker lines (launched in 2003). GamuT is now owned by Kvist Industries A/S, a high-end furniture and speaker-cabinet supplier located in Årre, Denmark." That's from a 2013 The Abso!ute Sound review.

From a 2015 Hifi+ review, "… the reason that solid-state amps have multiple output devices is because this gives more power and more power needs more heat dissipation. So how does GamuT get away with using only one device? I asked engineer Benno Baun Meldgaard this question and he explained that they use industrial transistors that were developed for motor control and welding and are even able to handle 400 amp peaks. This type of transistor is not available in the usual complimentary positive and negative pairs (PNP and NPN), but just NPN or 'negative' and GamuT had to do a lot of work to stabilize two of these devices for each channel, effectively turning them into a pair. To Benno's knowledge, Constellation Audio is the only other company that does this and then with multiple pairs rather than one."

From a WhatHifi? 5-star review whose photo this is, "GamuT: we wouldn't be surprised if you've never heard of the company. It's Danish and started life under the Sirius brand name back in the early '80s making amplifiers for studio use. But this is a company that has never really shouted about itself, or its products for that matter. That's a shame because—from what we've experienced—it makes some very fine components… and you can count the D3i preamp and D200i power amplifier among them. That might be understating the matter somewhat. This pre/power combination is easily one of the best we've heard and—while expensive—is comparable in performance to alternatives that cost Mercedes money. A high-end bargain, then? Hardly. £15'000 is still a truckload of money but we certainly see this combination as great value as far as top-end amplification is concerned."

From a 2017 Stereophile review on the Di150, "GamuT's single Mosfet is class-A/B design biased to 14 watts class A. This is to run the transistors at an optimum temperature that results in the best sound. GamuT also includes NPN bipolar transistors capable of putting out 25 watts of power which drive the huge N-channel Mosfet output transistors. And the two 500VA toroidal transformers contribute greatly to the solid sound quality. In the GamuT design, both the negative and the positive rail have… Mosfets that sound exactly the same which results in a shorter pathway, with less components in the pathway, which gives a very low distortion of even-order harmonics."