The Monitor Audio Group's current R&D team is 42 strong. About half is dedicated to speaker projects (acoustical, mechanical, industrial design), the other to electronic projects for Roksan or speakers with electronics like subwoofers. These teams combine UK and Sino personnel. Whilst the Group don't own their offshore factory, their main contract facility operates a production line including driver manufacture exclusive to them; "as close to owning a factory as it gets." Michael's acoustic R&D team alone includes five engineers stationed in their PRC facility. His QC engineering counterpart in the UK interfaces with seven more China-based engineers. The core of their R&D credo is fully coupled systems engineering. It considers drivers, crossover and cabinet simulations in concert not isolation thus designs them in lockstep. Having a 'perfect' driver means nothing if it ends up with a filter and cab not ideally suited to its parameters. In their 7×5.5×2.6m listening room of ~100m³, three engineers armed with laptops can respond to listening sessions with quick corrections. Those input into a virtual FIR/DSP crossover to be listened to just 15 minutes later. In this way the team can efficiently run through hundreds of successive design iterations in a far more efficient way than relying on physical prototypes. Iterative refinements can get far more granular. The room itself is modular and can get smaller or larger acoustically to represent different real-world scenarios including various RT60 times.

These cabinets are extensively braced both horizontally and vertically and additionally strengthened with tension rods between driver magnets and rear baffle. 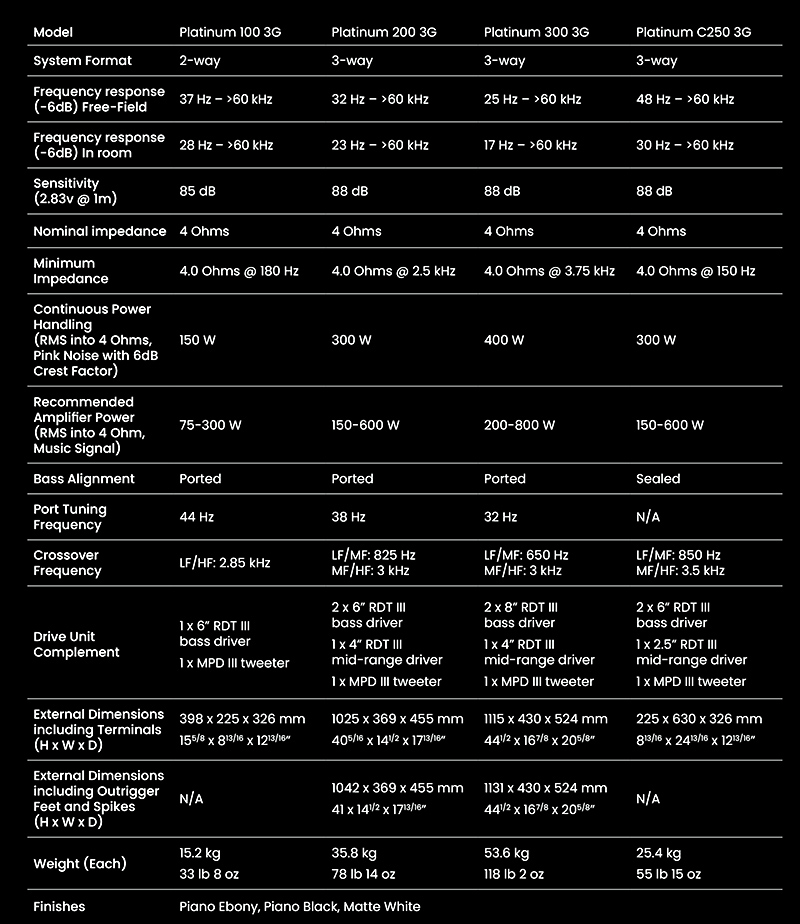 An on-site anechoic chamber plus open space are used for controlled measurements. Michael estimates that their accumulated experience now allows them to get within 95% of the final target response in multi-physics sim. Just so, the launch of a new range like Platinum 3G still occupied two years. Such time is simply spent more efficiently with advanced sim tools and the team's accumulated know-how to input ever more accurate parameters and values.

Work flow relies on vertical integration for full control over all design elements including the drive units. Waveguides and other structural elements get prototyped as 3D prints before they're committed to casting or machining. Monitor's offshore vendor supplies prototype drivers on quick turnarounds.

So the new 3G mid/woofer runs a 52mm Ø voice coil of rectangular edge-wound wire in an underhung geometry with copper faraday rings for fewer turns, less mass and lower inductance. Xmax is ±10cm. Revised edge termination of how the surround attaches to the cone has flattened the 2-5kHz response.

As before, highly torqued bolts between rear baffle and driver motors pull the transducers into the cabinet from behind. This puts the entire enclosure under tension and removes unsightly and inevitably loosening driver fixings from the front.

Finally the new 2nd/3rd-order elliptical crossover improves off-axis phase response and thermal resilience. Resistive notch functions are no longer necessary given how well behaved the new driver is out of band. Half the 100's filter mounts to the bottom plate, the other behind the terminal plate.

More targets for this ~16-litre box were solid 40Hz bass so 85dB voltage sensitivity. This was a conscious trade-off for more complete sonics than a 90dB box with 60Hz bass; or a box four times bigger. Aside from more refinement over the Platinum II predecessor, Michael singled out reduced dynamic compression and lower intermodulation distortion as further gains.

Whilst few owners will (or should!) play G3 speakers as loud as they can safely go—I'm not going to list the SPL figures because they'd promote early tinnitus—the extra headroom means that the drivers and their thermally optimized crossovers will coast across the range most of us will actually use. That means still lower distortion, greater linearity and ease. These improvements also migrated over from the Group's Cinergy Cinema project which must be able to sustain silly THX levels all day long.