Limewood current? With a bit of trickery, that's how the Swedish name Lindstrom might translate to English via German. Does that make for a proper intro? I didn't know Mikael Lindström from Adam when I chanced upon his website. I can't say I felt much wiser after. He prefers to tease, tickle and taunt, not overwhelm with detailed descriptions and grandiose claims. So things are sparse. Your eyes are as good as mine. What we see is a speaker in a possibly stone or concrete enclosure with a mid/woofer, laterally angled planar tweeters and hidden woofers. A minor exposed sliver of plinth gives away that this might just be a contoured open baffle. The product page adds 85 x 38 x 30cm HxWxD so very compact dimensions; a 6.5" diameter for the midrange; and a quartet of 8" woofers. Having a vivid imagination, I instantly envisaged stacked Ripol bass modules; not that these photos clarify much on that count. My online currency converter declared the listed 85'000 SEK or Swedish kronas to be €8'500. Bandwidth stated as 30Hz-20kHz, with 90dB sensitivity and 100-watt power handling. And that was the extent of what my visit to the site gleaned just then. 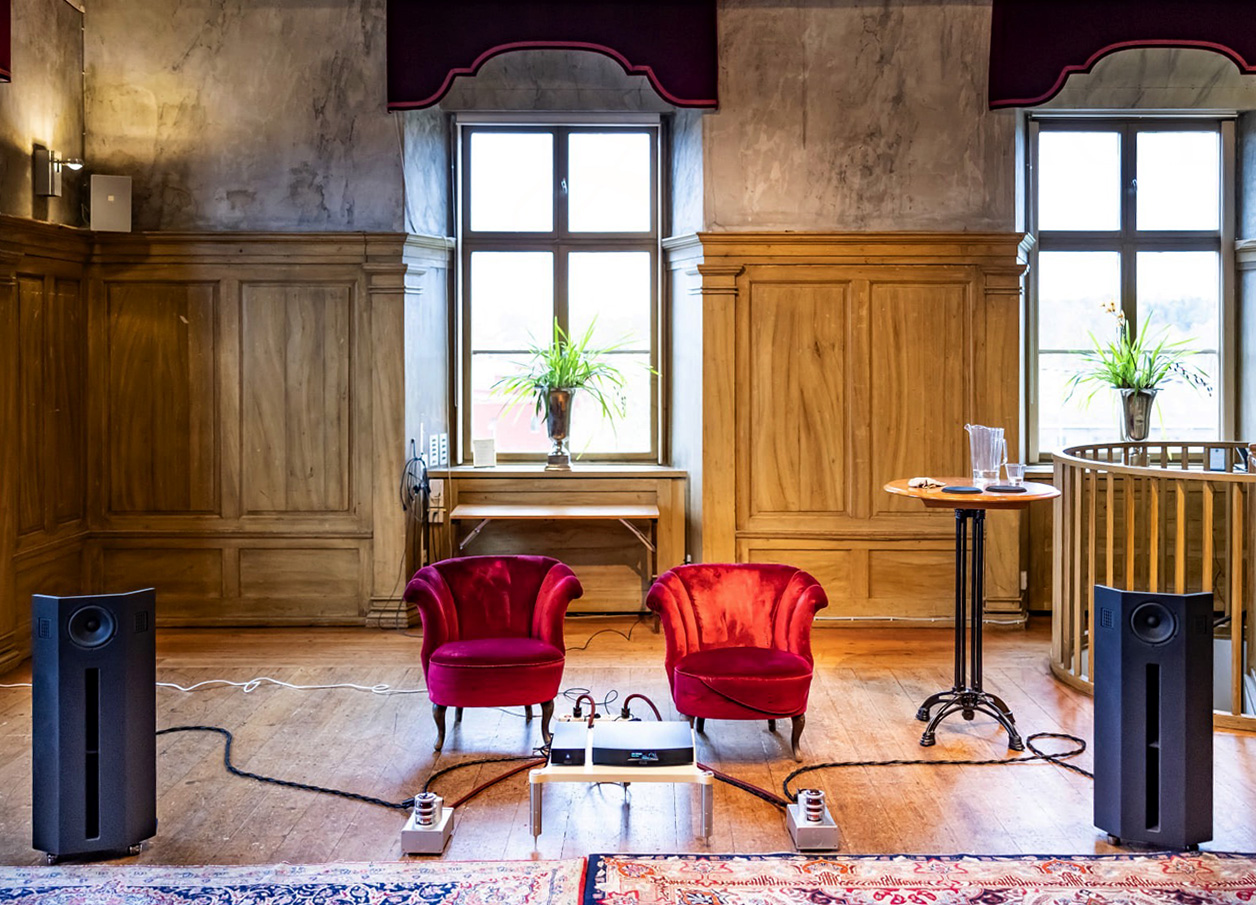 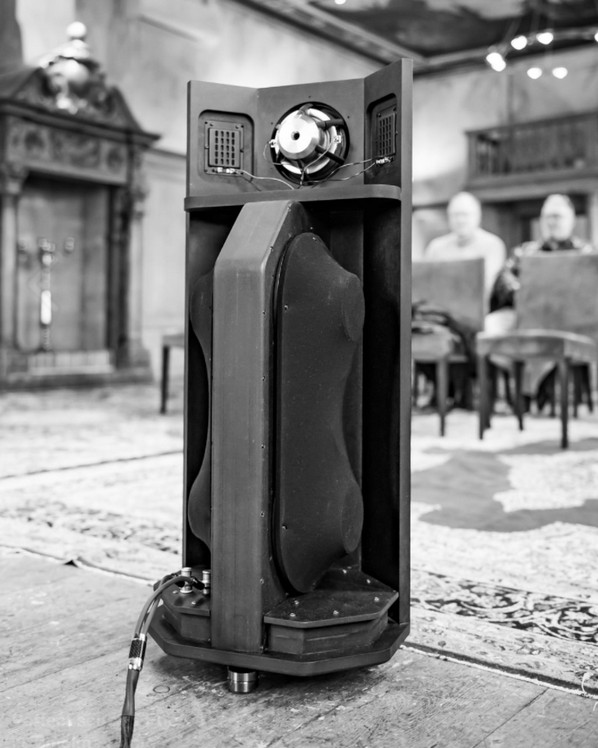 I did feel teased, tickled and taunted; enough to immediately dispatch an email inquiry.

I like compact speakers of Napoleonic bandwidth suitable for smaller rooms. I agree that the best way to avoid box talk is to avoid the talking box. But a vivid imagination only takes us so far. What else could Mikael share about his creation?

There's this ass-backward photo of the speaker's public premiere. Like the above photo, that was taking during October 2021's Take Five show of Swedish dealer Perfect Sense Audio Matters in Stockholm's Ulfsunda Castle.

Now we understand that Mikael didn't opt for the H-frame of a Ripol but left his woofers to face the room open-ended. Only a sock grill covers them whilst the upper three drivers go fully exposed.

Over the massive Jamo R909 open baffle from Denmark with its front-facing dual 15-inch woofers, this 90° turn on woofer layout shrinks the physical package yet still manages to pack the compound surface of a single 16-inch woofer. It just divvies up across four smaller units. That shrinks excursions which usually leads to lower distortion.

Finally, the midrange might just be from SB Acoustics' Satori range; while the outward-firing tweeters should broaden dispersion to more closely replicate that of the other drivers.

Or as Perfect Sense put it about this exhibit, "there are times when one feels that much on the market was launched as just refinements of pre-existing solutions rather than true innovation. This still has great value of course—a car still has four wheels but continues to develop and improve—but when something truly new and valuable appears, it's like a vitamin injection for the whole hobby.

"In this room we wanted to highlight three manufacturers who work at the forefront of breaking new ground in slightly different ways. Lumin today are well-established and leaders in their primary niche of network players optimized for streaming at the higher level. Their flagship X1 is our best-selling digital source in the higher six-digit price range. This was something we hadn't really expected when it first arrived.

"The reinforcement in this room came from AGD and their minimalist but powerful and extremely competent The Audion monos. Despite pressure from industry colleagues and close customers to bring in and test AGD, we resisted hard. Class D and GaN transistors encapsulated in tubes backlit by LED simply didn't feel properly serious. Yet after a few video calls and further dialogue with charismatic founder Alberto Guerra who lives in LA but has Italian roots, a couple of Audions soon flew to Sweden. After switching them on, it didn't take long before shoulders sank and chin as well. As so often this must be experienced but if you combine the purity, clarity, power and control of class D with the richness, flow and generous imaging of the best tube amplifiers, we approach the experience of these amplifiers. This may sound exaggerated or condescending and you may have heard it all said before – but this is for real.

"The next big revelation came when a passionate down-to-earth local designer from Stockholm heard about our event and wanted to show off his new creations. After developing speakers for about 40 years and over the last decade focusing on open baffles, Mikael from Lindström Audio had something completely new to demonstrate. This is his next generation of open baffles in a much smaller format where the front reveals very little of the power and scale which hide behind. This was one of the most impressive speakers I've heard if you love music and look for a natural holistic experience straight to the heart. Sometimes it's wonderful to let the inner analyst rest, give the head a break and have the emotions take over completely."