After January 2022's reveal of their Commander and Apex electronics, reasonable onlookers would have been certain. Gryphon had wholly drained their kitchen sink of novelties for the year.

Their cabinet's side view approaches a truncated pyramid yet its cross section is an asymmetrical hexagon. The black baffle no longer is concave but remains dressed with Gryphon's barely-there signature strings borrowed from Sonus faber. Enough new and existing design cues intersect to refresh the look without alienating brand loyalists. That's a very difficult tightrope to navigate.

The 2-way driver complement is all new, too. It combines a hi-tech 1.3" or 38mm Beryllium dome tweeter with a 7" spread-tow carbon-laminated mid/woofer from SB Acoustics. Eagle-eyed readers spied another novelty: assignable port directionality. The customer can alter the damped bass-line loading from venting out the back to the front for happiest in-room behavior.

There's even a 3-pole toggle switch between the binding posts to optimize phase for toe-in between 5°-15°. Surveying the post Munich evidence, the only thing I was unsure about was the defiant prototype moniker. Didn't this already look fully wrapped up; and with a red bow?

Feeling that way and noting an August release date, I threw my name into the reviewing hat to hear for myself how all of this would come together. Now it was up to Mssrs. Rune and Jakob who handle Gryphon's review scheduling and assignations. Would I be in our out?

As luck would have it, I was in. Having followed Munich 2022 from afar through sundry show reports, I spotted plenty of über-sized ultra-priced loudspeakers in the MOC's upstairs rooms. With the last big EU show in 2019, a 3-year hiatus had many makers keen to present their very biggest and baddest.

Unless you live palatially, I find a lot of it of questionable relevance. Here Eos 2 struck a note of sanity. Whilst unapologetically luxurious, its size propped up on a lighting plinth looks most reasonable against its makers' fashionably trim belt lines, its styling attractively modern without requiring more money than taste to appreciate. If you're solid working class—lots of work, lots of class—this could fit perfectly.

As a punter by proxy doing virtual window shopping from the comfort of my office chair, I found this prototype concept very intelligent on a number of scores. Unlike Monitor Audio's Concept 50, it's no eye challenge from choices that may be grounded in solid acoustic engineering but whose industrial design execution is like one of those chairs (the kind you can't really sit in). Eos 2 does not forget that its final habitat won't be an engineering lab but living room; and possibly a small one. As big shows like Munich remind us, designing a speaker that is acoustically sound then sized/styled to be attractive audio furniture which one wants to look at every single day whether it plays or not… that's far from easy.

"One of Gryphon’s historic strengths has been our systemic approach to hifi. By designing every component in the playback chain, we achieve a level of synergy that wouldn't  be possible otherwise. Recently we introduced breakthrough amplifier technology first with Essence then Apex, then redefined preamp performance with Commander. Vanta cabling likewise represents a dramatic step forward in metallurgy while our StandArt racks brought audio furniture to a new level of sonics and aesthetics. Our new Eos speaker range is the brainchild of Benno B. Meldgaard, our chief speaker designer¹. Former head of design for Gamut, Benno is one of high-end audio’s great young talents. His work for Eos delivers innovative solutions to achieve big sound in small rooms. First among these is a stealth enclosure whose purpose-engineered baffle enables the drivers to yield smooth dispersion and uniform energy output as well as a more stable dimensional soundstage. The exterior is sculpted to function as an efficient diffusor of room standing waves—a great advantage in small spaces—while the interior is critically shaped to eliminate internal standing waves and cabinet resonances.

"Our proprietary line porting is a new way of directing the mid/woofer's back energies at the port, ensures a perfect path for low frequencies to exit while providing efficient damping above 60-80Hz. The result is shockingly fast clean bass free of distracting upper-frequency artifacts. Benno’s mandate to maximize room compatibility and placement flexibility yielded two additional flourishes. Eos can be either front- or rear-ported by means of removable port plugs while a three-position phase switch ensures ideal response at the listening position. Taken together, these two features enable unmatched placement versatility. Our proprietary woofer features a thin-ply carbon-fiber cone with impulse optimizer ring manufactured to our specifications. Our proprietary Beryllium dome uses a resonance-free rear enclosure for enhanced dynamics and low-end response. Hand-assembled from the finest components, our progressive-curved-slope 2kHz crossover² of 1st to 4th-order rising slopes maximizes power handling and ensures a seamless transition between drivers which both connect in positive polarity with perfectly aligned impulse responses for accurate timing. Featuring 91dB efficiency, a 4Ω minimum impedance and 24Hz-40kHz³ bandwidth ±3dB, Eos 2 presents an easy load for virtually all high-quality power amplifiers. Color options are red, grey and high-gloss black."
_______________________________________ 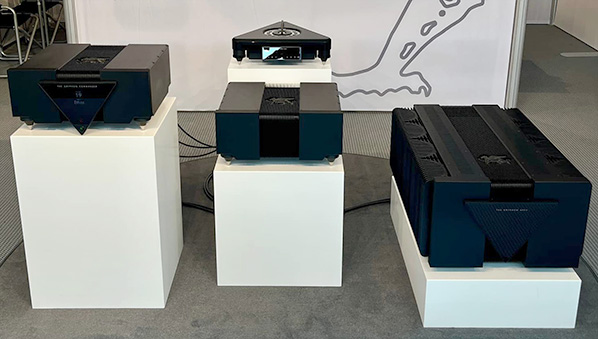 ¹ LinkedIn traces B.B.'s hifi career as having started at TV & Lyd Specialisten in high-end sales & service from August 2000 to October 2012. He then became chief designer at GamuT Audio until December 2017 when he held the same position at Raidho until December 2020 when he joined Gryphon Audio Designs. In some ways his career seems to have paralleled and even intersected Michael Børresen's.

² Such filters are becoming more popular. I first encountered them with French brand Apertura whose designer Christian Yvon had also used them in his previous work for Goldmund decades ago. By stacking two or three filters atop one another at offset frequencies, the crossover transition begins shallow for best phase response, then kinks ever sharper to fade out far quicker than a conventional 6dB/octave filter does which puts more strain on its drivers (they must remain linear well beyond their primary bandwidth). Magico's elliptical crossover meanwhile places a capacitor in series with the bass driver's inductor. The capacitor value is matched to the driver's resonant frequency to create a 4th-order roll-off with just "12dB worth" of components as HifiNews put it.

³ Such extended upper bandwidth isn't noteworthy because we can hear that high. It's relevant because it signifies first breakup modes farther out of band. A traditional Titanium dome tweeter breaks up at 23kHz. In theory that's beyond our hearing's threshold. In practice it creates intermodulation products within the audible range. Those manifest as grit, grain or a metallic tinge. Harder materials like Beryllium and diamond can upshift first breakup modes to ~50kHz or beyond. Like digital upsampling which moves conversion artifacts out of band to get away with shallower reconstruction filters, 'upsampled' tweeter bandwidth sounds smoother and suffers less phase shift. Metal domes don't ring because they're hard. They ring because they aren't hard enough. My old boss Pat McGinty—now of Meadowlark Audio v2.0—used to favor a dipole AMT as his top HF transducer of the new line. Very reluctantly, he then was talked into trying SB Acoustics' Satori Beryllium dome. He's not looked back since: "In our opinion, the finest tweeter ever made". And yes, it's another Danish design albeit manufactured in Indonesia.