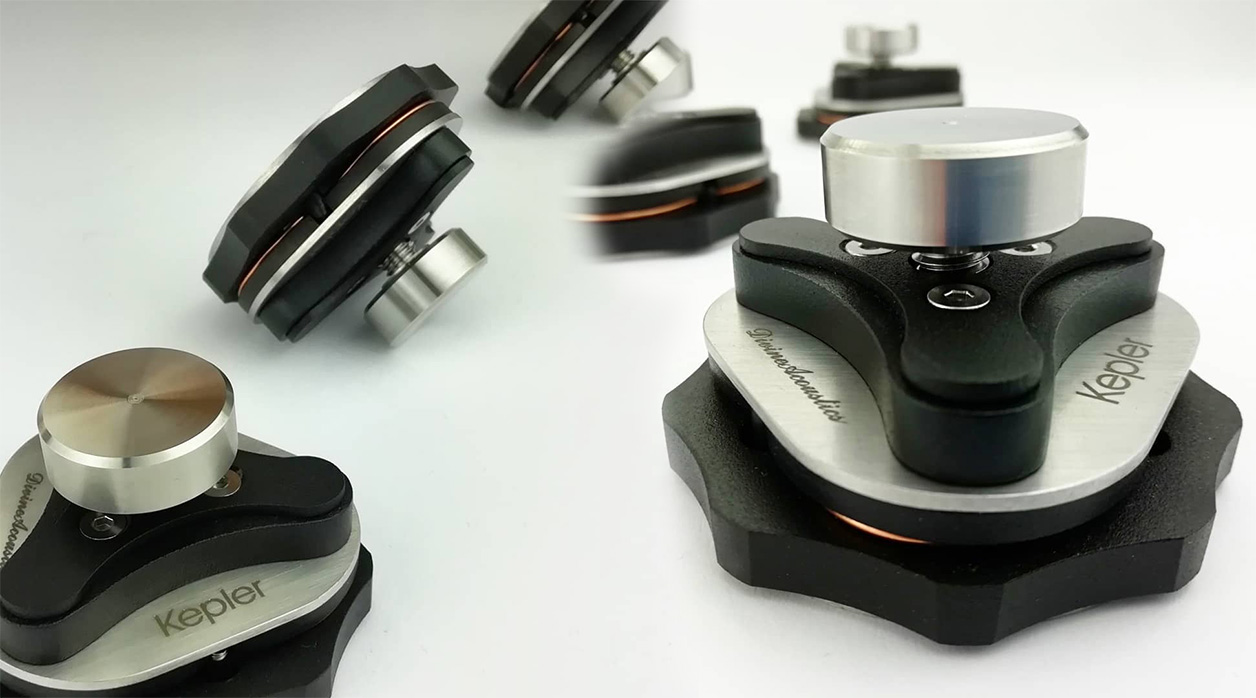 Spell check. Like its High Def cousin flips in High Deaf—hello THX Reference level of 85dB average, 105dB peaks, 10dB more for the bass channel—Hi Res flips from good to bad as Hi Resonance. My worst encounter of this bad kind came from first setting up two upfiring Grimm SB1 subwoofers. In your mind's eye, picture a potent 10" long-throw woofer in the smallest and shallowest possible box. The magnet virtually touches the ground like your behind seems the road in a lowrider boom truck. Can you see how the woofer's own backside hammers directly into the floor?

Upstairs my floor was obviously suspended. Three rooms over, my wife instantly complained. Powerful bass pulses migrated unhindered from my end of the house to hers. In my room I heard this structural resonance as time-delayed echo. Each recorded beat was stalked by a structure-born ghost whack. The audiophile hi-res truth is anything but the high life if we misspell things and don't isolate the jackhammer action of loudspeakers and subs. We don't want to couple that to the floor where it amplifies delayed in time like the chassis of that boom truck nearly scraping tarmac. And why upset neighbors with our leaky bass? Are we rude adolescents? Noise pollution is as obnoxious as second-hand smoke. No, we want to decouple or isolate our transducers. The louder and bassier we get, the more important this mandate becomes. It's not rocket science.

Granted, it could be if our name was Johannes Kepler. His famous three laws state that every planet’s orbit is an ellipse with the Sun at a focus; that a line joining the Sun and a planet sweeps out equal areas in equal times; and that the square of a planet’s orbital period is proportional to the cube of the semi-major axis of its orbit. If that sounds complicated, wait until you hear what's inside a Kepler footer by Piotr Galkowski of Divine Acoustics. Each handles up to 20kg whilst containing 40 elements across 7 dissimilar layers. Inside is a rectangular ceramic bar coupled to rubies¹ arranged in a triangle shape. These stones are kept in a fixed position to load chromium-nickel steel for a 3-layer system. The triangle rests on the ceramic bar surrounded by elements that gently compress the system. A threaded spindle transmits vibrations from component or loudspeaker to the top points of the rubies. Steel, chromium, nickel, copper, titanium, molybdenum and auxiliary elements of wood and polyamide are also part of each Kepler. A set of three sells for €350, a quartet gets €450.
__________________________________________

¹ Synthetic rubies or corundum are the typical jewels set inside watch movements to reduce friction and provide a hard smooth surface to allow metal components such as a wheel train to rotate freely. On the Mohs scale of hardness, such stones rate a 9, higher than an 8.5 masonry drill bit and just below diamond's 10.

I'd planned on making their acquaintance at the literal tail ends of Piotr's Bellatrix speaker. Then I learnt that Eton of Germany were seriously back-ordered on drivers to temporarily halt his speaker production. Just then C-19 run-on effects jammed up supply chains everywhere. So I suggested to cover Kepler separately. Piotr proved game. I'm a big believer in resonance control so currently use HifiStay and Artesanía racks from South Korea and Spain respectively. Before that I had two Grand Prix Audio Monaco stands. It's why add-on footers are redundant beneath my gear. It's very effectively isolated already and across multiple stages.

I'll thus focus on speakers and subs on floor and desktop. The latter is even more suspended than our upstairs floor. Preventing my DMAX Super Cubes from leaking bass into the heels of my hands is key(board) unless I fancy feeling slightly delayed vibratory knots after each bass beat. Not. Clean bass that stops on time is my idea of res so high resolution not resonance. That's spell check engaged. So my resident Swiss monitors decouple on Hifistay multi-layer ball-bearing isolators upstairs. The 2×15" downstairs sub floats on Carbide Audio footers. These Go-Parts single-ball isolators (try to?) do the job on the French downstairs speakers. Under the Slovakian desktop speakers I used to run double-stacked Kanto Audio stands to which I wire-wrapped thin sand-filled tubes repurposed from bigger Ardán Audio desktop stands. 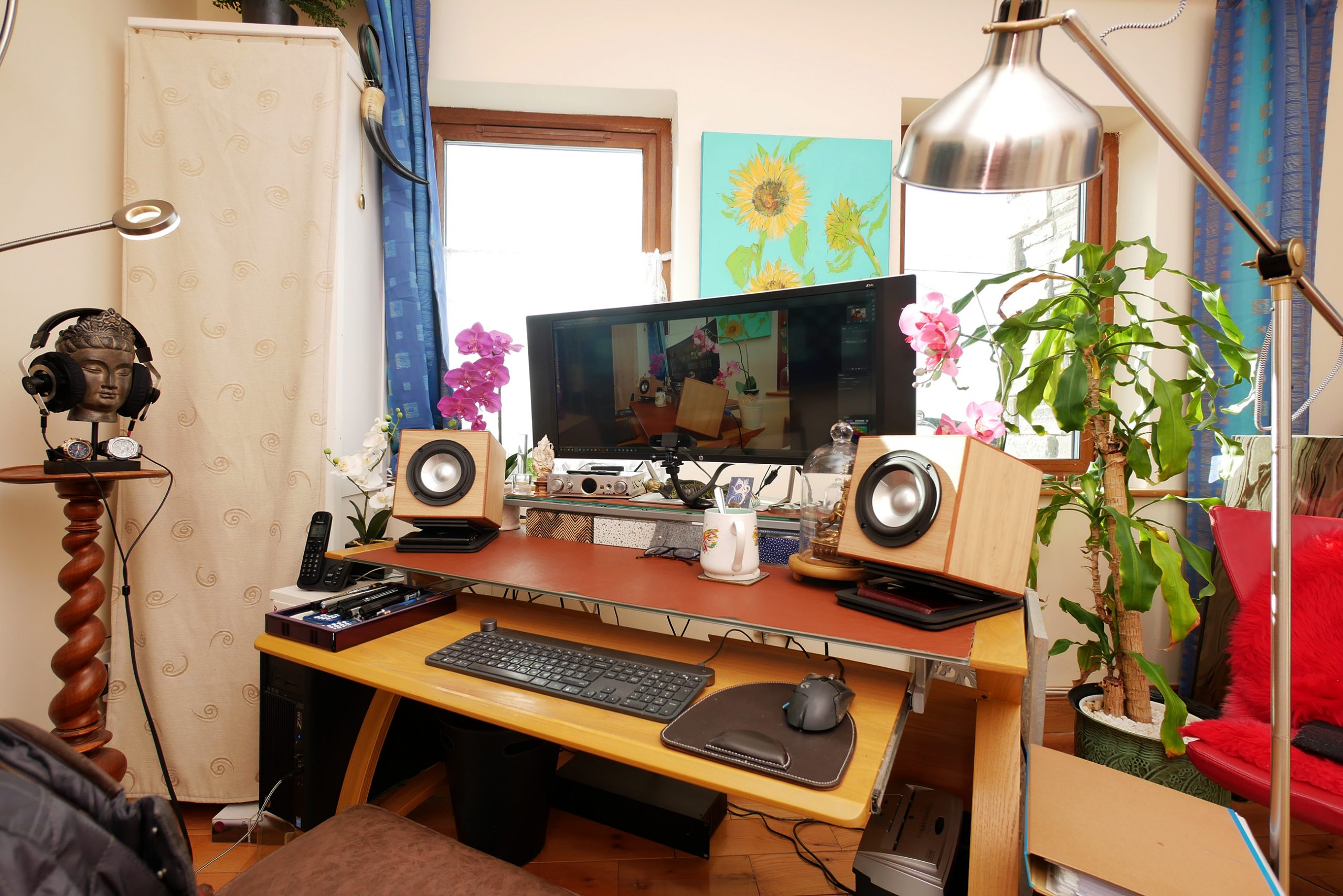 Prior to the final sand-filled tubes but already doubled up.