This review will soon appear on HifiKnights.com. By request of the manufacturer and permission of the author, we will then syndicate it to reach a broader audience. – Ed.

In the wake of High-End Munich 2022, I'd penned an Editorial which then became today's review intro. "Mytek's new amps with a tube on top could be of interest to many people who have yet to find efficacy in class D designs. The tube is actually not part of the signal chain. It's illuminated by an LED. However, it's there to start the conversation and let people know that this design sounds like a good mix of tubes on the top end and solid state control on the bottom." [Quoted from Chris Connaker's show report.] This hyper-saturated unedited photo is from Mytek's Facebook page. Chris' own photos show rather softer backlighting and even have a close-up of Mytek's perf logo mounted inside the glass bottles. 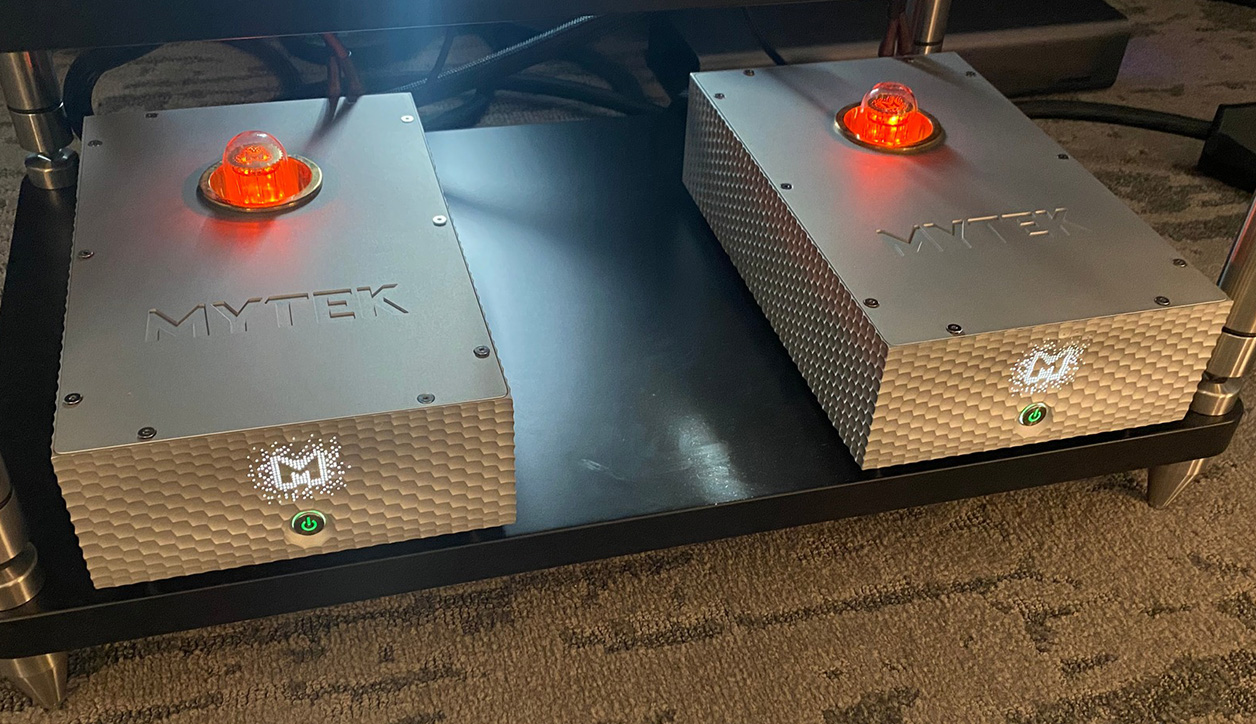 Mytek had been strangely slow about updating their website with more tech info and actual photos. Hence the presence of glowing bits first spied at the Chicago show remained a mystery. Then a poster inquired directly about it on Mytek's Facebook page. Their April 24th answer was disappointing. "This is something new, a concept called GanTubes; more info soon." Why disappointing? Alberto Guerra had minted this very concept for his GaN-based Vivace then Audion then Gran Vivace amps years earlier. He actually coined the term GaNTube. Now it seemed a rather cheap shot to borrow it for a directly competing design and call it new. Unless I missed something—which I very much hoped—Mytek's design concept struck me as a real miss not because it wasn't a cool idea. It's because it had been done already; with an actual class D gain stage inside. Call me old-fashioned but copying it this blatantly with an empty bottle was – well, uncool. 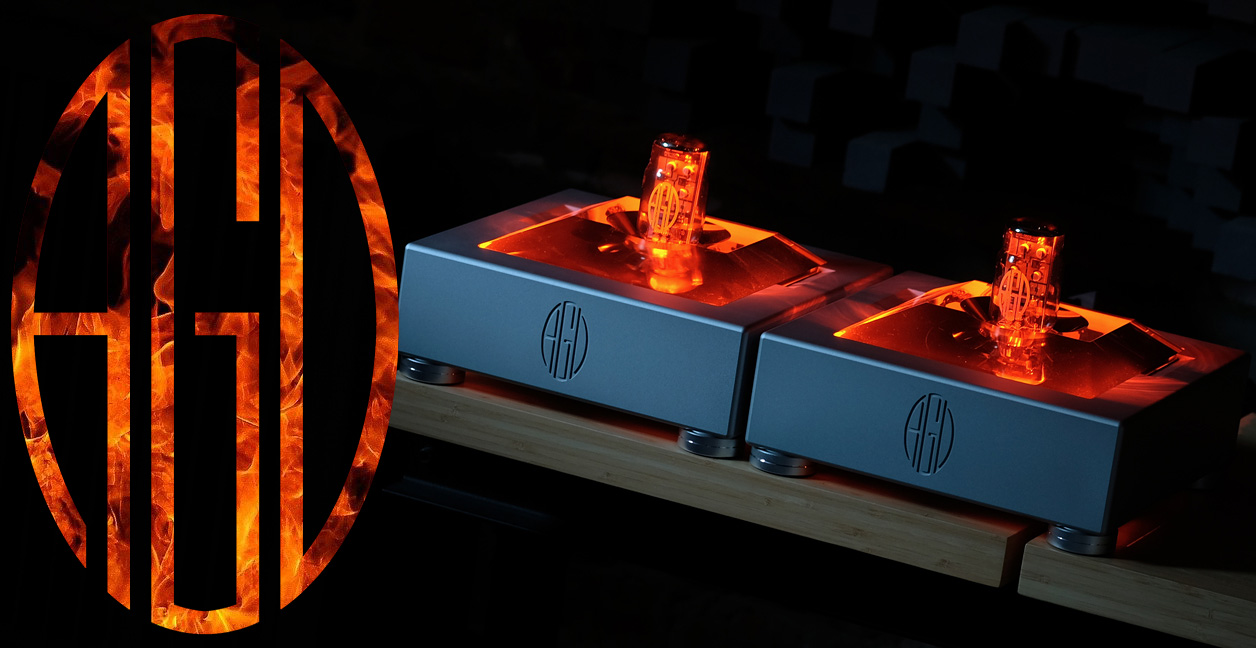 There my rumination could have ended. But as usual, more was to it. I learnt what when I asked Alberto Guerra to comment: "Sometimes a copycat is the best sign of respect. Michal Jurewicz, Mytek's CEO, actually was very kind and respectful. He informed me during Axpona 2022 about the decision of his marketing and design team to adopt inspiration from my design which he applauded as beautiful in style and most importantly, in sound. I actually had first-hand opportunity to see that 'inspiration' in Munich a few days ago. I smiled because I thought it a very nice compliment. So that's how I see it. He and I had lots of conversations since his first approach at Axpona—I did not know him at all before—and we now have an extremely good rapport. He is open and willing to collaborate. We actually discussed the idea to commence some kind of presentation/forum at the next audio show where we and other contributors would introduce audiences to what's behind GaNtube tech, our design choices and more importantly, why GaN class D amps can sound so good if done properly. In short, Michal is a very respectful person, a very correct businessman, an outstanding engineer and now a friend of mine."

So imitation really can be the sincerest form of flattery. Mutual admiration society and all. "Besides… others are trying to make class D. I only do class AGD." LOL!

Or as Michal explained it to a Stereophile reader after Axpona, "we use an imitation tube designed to reinforce the illusion that the amp sounds like a tube amp. The original idea comes from Alberto Guerra who created a GaNTube™ which contains his GaNFet power stage. When I worked on our design with another engineer during lockdown, we looked at AGD's webpage and scratched our heads why, with a Class D GaNFet topology, there was the repeat claim that their circuit sounds like 'tube'. We were building our own circuits and evaluating them by listening every other day.

"One day I had a revelation. The circuit really started to sound like a tube amp, specifically the velvety top and beautiful midrange. The bass which is usually problematic in most tube amps here was tight and controlled like a good transistor amp. Well-executed GaNFet is amazing technology. You get the best from the worlds of tubes (top and midrange) and transistors (tight bass).

"Our imitation tube represents the soul of this amp. We offer our Empire monoblocks with two covers: one featuring the tube which is controllable so can be dimmed or changed to a different color; and a plain cover for those who'd rather not have the tube."

Now all was clear. Tube GaN or not is entirely your choice. That's true even for AGD whose Tempo internalizes the circuit to do away with the GaNTubes.

As Alberto explained, "the decision for Tempo di GaN was basically twofold. One, I had to introduce a product that would lower the point of entry into AGD tech to potentially capture more audiophiles. Two, I wanted to satisfy those priests of the HiEnd who called for excommunicating me for the sin of blasphemy and offense to the holy icon of the sainthood of the venerable vacuum tube. So I used the Audion circuit, integrated it onto a single board and put it inside a single stereo chassis. This is truly the Tempo di GaN both for its time being now; and for the new rhythm so sorely needed in the high end."

Beyond that editorial turned intro, Alberto had added that "I'm sending a demo Tempo to Dawid in Warsaw to review along with its companion Alto preamplifier. I will be happy to order a syndication for the final article." Once Dawid has done his work, we'll learn what he heard and thought of it all right here. As to GaN or gallium-nitride output transistors, they also feature in the class D Element amps by Merrill Audio; in Hifi Rose's RA-180; in LSA's Voyager GAN350; in Java Hi-Fi's integrateds with LDR volume control; in Orchard Audio's Starkrimson range; and in class AB with Gold Note's PA-10. As class D designers Bruno Putzeys and Lars Risbo of Purifi would remind us who continue to use traditional silicon Mosfets, no part is a silver bullet per se. It's all about implementation. That mirrors Alberto's qualifier "if done properly". Just spotting the three letters GaN next to an amplifier shouldn't be taken as guarantee for superior sound. – Ed.